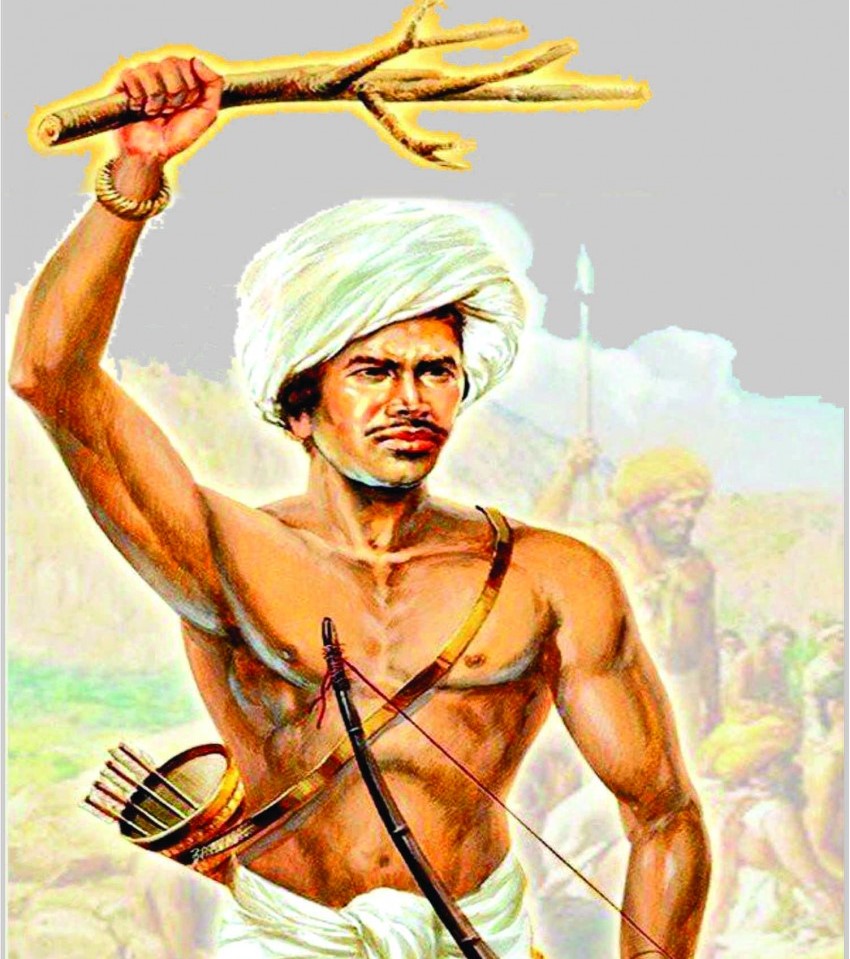 ‘Abua Disshom Re! Abua Raj! This is our country! We shall rule it!’

Just outside the village of Silagain, bordering Ranchi, a group of some fifty tribal men, all of them armed with bows and arrows and spears, sat huddled together in a tight circle, braving the cold of the night and raising slogans against the British government. A thick winter fog obfuscated their outlines. Had it not been for their sloganeering, anyone passing by would have missed seeing them in all probability. Standing in the middle of this circle was Budhu Bhagat, the man leading the tribals of the region in their rebellion against the oppressive British government and its local lackeys, the zamindars, the merchants, and the moneylenders. A tall, well-built man in his late forties, Budhu was a force to reckon with. He’d worked quietly and patiently for years, laying the groundwork for the rebellion and training his people to fight against the exploitative regime they were being forced to live under. Initially, he had started with only a handful of people who believed in his cause, but he had more than 500 people now, scattered across as many as fifteen villages, backing him and willing to fight alongside him.

Budhu mostly kept a low profile, preferring to keep moving from one village to the other under the cover of darkness and in disguise, stoking the flames of rebellion as he moved. But whenever a zamindar or a local police officer’s excesses became intolerable, Budhu would descend with his gang and attack the man.They’d beat him within an inch of his life, ransack whatever they could find, loot all his money, and then leave. Later, they would distribute the money amongst the poorest of tribals.

‘Brothers, you are all well aware of the war that Ranchi’s Superintendent of Police, Bob Mayers, has declared on our people. He is picking up our people and locking them in his jails indefinitely, all under the draconian laws of the angrez raj. We have put up with his brutality for far too long. No more, I say! No more! Tomorrow night, we will attack Mayers’ bungalow, take him captive, and transport him to the forests around Dasham Falls. And with him as our hostage, we will put pressure on the administration for the release of our Adivasi brothers who are rotting in jail and getting beaten up and tortured every hour of the day. We must fight back now! We must fight for our rights! Our land! Our way of life!’

As his men cheered, Budhu’s sons, Haldhar and Giridhar, stepped forward to explain the more detailed plan of action for the next seven days. They had worked arduously with their father to reach a stage where a massive tribal offensive could be launched against the British. So meticulous was their planning that every man assembled there knew exactly what he was expected to do at any given point in time over the next one week.

Budhu watched with pride as his sons described every aspect of their plan to his men, answering their questions and clearing their doubts with ease. ‘I’ve trained them well,’ he whispered to himself. ‘They’ll keep my vision alive even after I am gone.’ Budhu knew that the movement to free his people from the clutches of the British would need strong leaders to carry it forward once he was gone and he saw that potential in his sons. In a strange and twisted coincidence, one that Budhu was not aware of, the brutality that Mayers had unleashed upon the tribals in the last few months would lead to an upsurge in the movement across the whole region, causing men, women, and even children to join the rebellion with a fervour that Budhu could not have imagined them to be capable of.

‘Come now,’ Budhu addressed the men again, ‘let’s all go to the Shiva temple and seek the Lord’s blessings before embarking on tomorrow’s mission.’

The men stood up and quickly formed a line behind Budhu. In absolute silence, they cut through the still forest and made their way towards the path that led to Ranchi, abutting which stood an ancient Shiva temple. They all believed it was auspicious to pray there before embarking on a mission.

When Budhu and his men arrived at the temple compound, they were surprised to find the temple locked from the inside. There was no sign of the temple priest either. Everything was utterly still and quiet. Dawn had broken by then, and ideally, the priest should have already performed the morning puja.

Sensing that something was amiss, Budhu gestured to Haldhar to cautiously take a look around. Haldhar nodded, and then stealthily crept towards the temple. He was barely five steps away from it when, all of a sudden, the door flew open and the loud crack of a bullet split the air. Budhu watched, stunned and horrified, as Haldhar collapsed to the ground, blood blooming across his clothes.

As Budhu and his men stood paralysed with shock, more than twenty policemen emerged from within the temple, pointing their rifles at the tribals.

‘Surrender or we will kill you right here!’ yelled Inspector John Wright, the officer in charge of the ambush.

Before Budhu could decide on his next move, a young tribal boy from his army leapt into action. Pulling out an arrow from his quiver, he took aim and shot one of the policemen, killing him on the spot.

‘ATTACK!’ shouted the inspector, incensed over the death of the policeman.

Almost immediately, about forty policemen sprang out from the thick bushes that grew some fifty metres behind the temple and surrounded the area. Neither Budhu nor his army had come prepared for such an ambush. As the policemen closed in on the tribals, Budhu considered pretending to surrender. He knew that his surrender would cause the British to let down their guarda little and after that, it would only be a matter of finding the right moment to take the British by surprise. But while his young army was high on energy and passion, it lacked the experience and patience needed to extricate itself from the situation. Even as Budhu signalled to his men to backtrack into the forest, they attacked the British, killing two more of the policemen. British bullets shredded the air the next instant, as the policemen began firing blindly.

It was an extremely unequal fight which went on for over an hour, with the tribals drawing the policemen deeper and deeper into the forest where they had the advantage of terrain. But no matter how well and how hard they fought, the tribals, with their crudely fashioned bows and arrows and spears, were no match for the guns. As the fight came to an end, Budhu and his sons, along with twelve of his men, lay dead while the rest of the tribal army was taken hostage.

Even as Budhu breathed his last, his body pierced by no less than ten bullets, he looked up at the triumphant face of the inspector standing over him and uttered a warning that would prove to be prophetic, ‘Today, you won. But this is just the start. One day, our ulgulaan, our revolution will throw you out of this land!’

Budhu Bhagat’s revolt was the first in a series of uprisings that rocked the Chota Nagpur plateau region and lasted for about a decade or so. It sowed the seeds of a much bigger ulgulaan that would sweep through the region in the latter part of the century.

Excerpted with permission from The Legend of Birsa Munda, Tuhin A Sinha and Ankita Verma, Amaryllis Publishers. Read more about the book here and buy it here.

This book tells the remarkable story of Sabu, India’s first actor in Hollywood
“The Other Man”: This heartwarming queer fiction is about finding happy ever after on your own terms
Comment