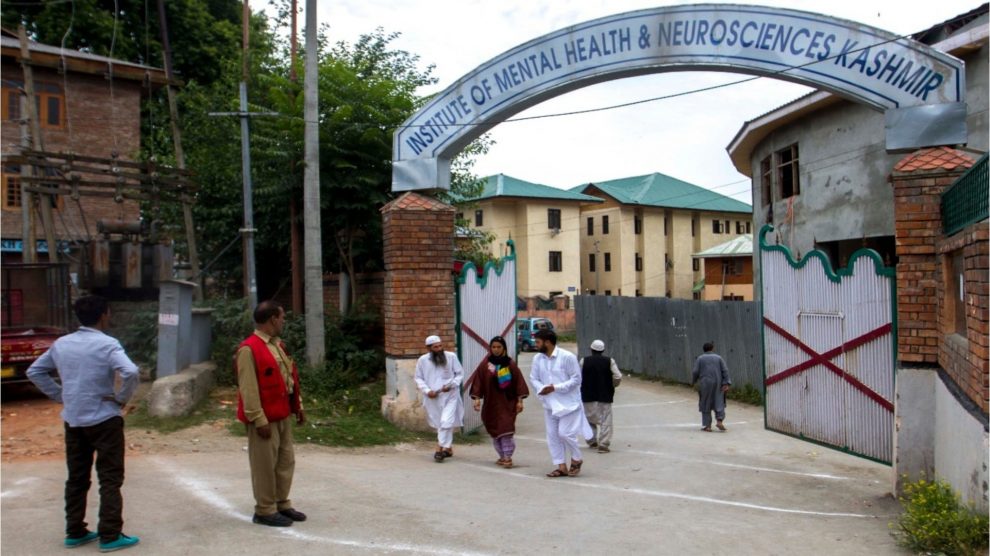 A network of narrow, dusty roads takes me to Kāthi Darwāzā, an imposing gateway into the once-splendid, medieval city of Nagar Nagar. Nagar Nagar, with its palaces, ateliers, and gardens, is long gone. But the military encampment that protected it, perched on one of Srinagar’s most sacred hills, Koh-e-Marān or Hari Parbat, remains. From this mountainous perch, over centuries, one military garrison has replaced another.

Kāthi Darwāzā, graffitied and weathered, is still a boundary marker. It offers an entryway into the Old City from shiny, new Srinagar, with its gaudy, concrete structures, bustling avenues, and chaotic traffic. Runaway chickens from the nearby Animal Husbandry Department dart back and forth through the gateway, pecking at crumbs and litter on the road. For me, the archway is a different kind of threshold, an opening between home life and fieldwork.

I disembark from my auto-rickshaw outside Kāthi Darwāzā. Others, too, descend from rickety and colorful public buses. A motley crew, we walk through the doorway together, past imperial debris, open sewers, chemist (pharmacy) shops, and fruit sellers. After a ten-minute walk, we arrive at another gate. This one is newer. In bright blue letters, it announces itself in English: the Government Psychiatric Diseases Hospital, Kashmir’s only public psychiatric hospital for a population of 8 million people. A fort within a fort, secrets folded within.

It’s a busy Saturday morning in early November. I make my way to the hospital’s crowded outpatient department (OPD), where Dr. Manzoor, a psychiatrist, is on duty. It’s only been a few weeks since I started fieldwork, and I’m still unfamiliar with the rhythm of the OPD. I’m here to learn about an unfolding “epidemic of trauma,” a product of a long-standing conflict between Kashmiris’ unfulfilled demands for political self-determination set against competing claims by both India and Pakistan over the region.

In response to Kashmir’s struggle for self-determination—which became an armed movement in 1988—the central Indian government heavily securitized the region, making it the most densely militarized in the world; dissolved the Jammu and Kashmir state assembly; and imposed stringent antiterrorism and emergency laws that transformed everyday life. Because some armed groups received assistance from Pakistan, the Indian state glossed the movement as Pakistani-sponsored “cross-border terrorism,” while erasing its own extralegal actions in the region. By the turn of the century, the armed movement was largely defeated, but the approximately 400,000 Indian armed forces deployed—including military, paramilitary, and militarized police forces—were never withdrawn. “Anti-terror” emergency laws have remained in place, criminalizing Kashmiri Muslims as potential terrorists. The (mis)reading of Kashmir’s struggle for self-determination as a movement fomented by “terrorists” gained greater force with the United States’ “war on terror,” which sanctioned racial profiling and policing of Muslim communities worldwide.

Meanwhile, the indefinite imposition of emergency-like conditions exemplify a new modality of warfare, which deliberately blurs lines between civilians and combatants. Despite the fact that there are only a few hundred fighters in a population of 8 million people, and that most Kashmiris have turned toward civil disobedience and peaceful protest, they continue to live in a state of perpetual war—what many describe as a colonial and military occupation (jabri qabzeh). More than seventy thousand Kashmiris have been killed and more than eight thousand are unaccounted for since the armed conflict began.

The movement for Kashmiri self-determination has come at an extraordinarily high social, political, and psychological cost. Kashmiris say that no family is untouched by the conflict. In 1993, soon after the conflict began, Kashmiri psychiatrists noticed an alarming increase in “disorders directly related to traumatic events,” including spikes in “depression, anxiety, dissociation, post-traumatic stress disorder (PTSD), and acute stress reactions” among civilians. By the early 2000s, as rates of violence ebbed, incidence of psychological trauma soared. Psychological trauma replaced mortality as the defining public health concern in the region.

Psychiatry, a historically neglected and marginalized part of India’s public health system, burst out of obscurity. In the wry words of one psychiatrist, until then, “people had been too worried about life and death to pay attention to trauma.” Rates of trauma and PTSD further increased after a devastating earthquake hit the region in 2005, killing more than eighty thousand people in both Indian- and Pakistani-controlled Kashmir. By 2006, epidemiological surveys showed that more than 60 percent of Kashmiris were suffering from high levels of anxiety, nervousness, tension, extensive worrying, and trauma that persists through their lifetimes. Unlike earlier cases of trauma or PTSD, which were specific to populations such as refugees, now an entire civilian population was diagnosed as traumatized.

Articles with titles like “800,000 Kashmiris Haunted by Horror” and “Kashmir’s Trauma Generation” appeared in the local, national, and international press. Many featured the psychiatric hospital as the epicenter of a crisis. The hospital went from a sleepy backwater with an annual patient load of about a thousand visitors per year in 1989, to over eighty thousand patients per year by 1999, without any corresponding increases in the number of psychiatrists. The exponential increase in people suffering from psychological distress led several local and international humanitarian organizations, including Doctors Without Borders (Médecins sans Frontières, or MSF) and Action Aid International, to start providing mental health services. When I began fieldwork in 2009, mental health experts were still desperately trying to keep up with the deluge of patients, many of whom were repeat visitors.

Back in the crowded OPD, meaning slips through my fingers like water. Patient after patient—or more precisely, one kin group after another—enters. The flow is relentless. A doorman attempts to maintain order. He guards the door, a thick stack of medical cards on a stool in front of him. Every time the door cracks open, more faces peer inside, hoping for their turn. He calls out names, Ashraf Hussain! Irfana Maqbool! Another family shuffles to the front and edges inside. The doorman hands them their white medical cards, many of them worn and palimpsestic. The door slams shut.

Excerpted with permission from The Occupied Clinic: Militarism and Care in Kashmir, Saiba Varma, Yoda Press. Read more about the book here and buy it here.

Join The Dispatch Whatsapp Group to stay updated
The Dispatch is present across a number of social media platforms. Subscribe to our YouTube channel for exciting videos; join us on Facebook, Intagram and Twitter for quick updates and discussions. We are also available on the Telegram. Follow us on Pinterest for thousands of pictures and graphics. We care to respond to text messages on WhatsApp at 8082480136 [No calls accepted]. To contribute an article or pitch a story idea, write to us at [email protected] |Click to know more about The Dispatch, our standards and policies
TagsEthnography Saiba Varma The Occupied Clinic: Militarism and Care in Kashmir Yoda Press