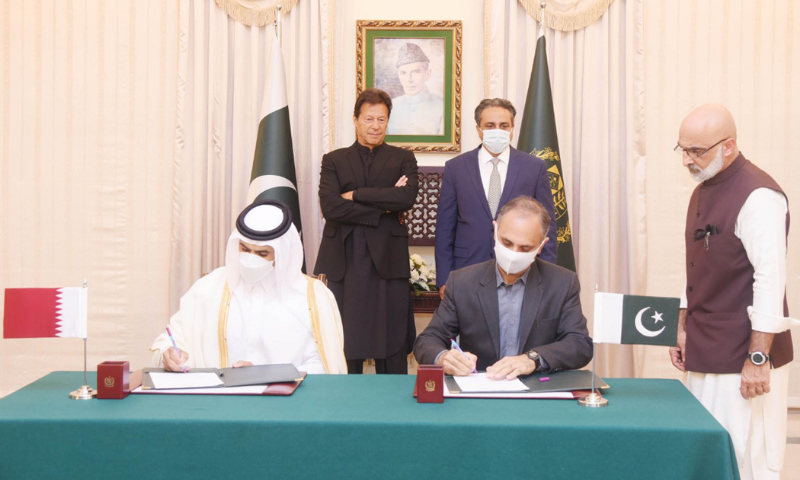 On 4 July, Dawn reported on the engagement of Pakistani authorities and representatives at various levels for the supply of liquefied natural gas (LNG) on deferred payment. A week earlier to this development, the chief of army staff (COAS) was on an official trip to Qatar and discussed matters of mutual interest, defence and security cooperation and the regional environment. Qatar’s capital Doha was also a host for staff-level talks between IMF and Pakistan. The Qatar-Pakistan common peace objective in Afghanistan also enabled US withdrawal, however, it is a matter of contention who is aligning with whom? The article below tries to understand the nexus.

An overview
As per the State bank of Pakistan’s (SBP) monthly statistical review for July 2022, Pakistan is expected to receive approximately USD 15 billion in remittances from Gulf countries and Qatar is contributing, 6.2 per cent of it. For the financial year 21, Pakistan imported commodities worth USD 12 billion from Western Asia and 19 per cent of the imports were from Qatar. Qatar has periodically allowed cash deposits to SBP reserves to stave off the foreign currency crises in Pakistan. In the year 2019, Pakistan received USD 3 billion from Qatar in the form of deposits and investments.

Pakistan has signed a second long-term contract for the supply of LNG at a 31 per cent discount compared to international prices, the contract has a clause of price negotiation after four years. Under the contract, Qatar will deliver two ships (containing a total of around 200MMCFD of LNG) a month. The first long-term contract was signed in 2015 for 500MMCFD which will be replaced by the latest 10-year contract. Still, there is a shortage of LNG in Pakistan, as towns and cities are witnessing load-shedding for up to 10 hours each day. Constrained by cash and reserves, Pakistan is negotiating for deferred payments on LNG as it has executed such a mechanism in its oil import from the Kingdom of Saudi Arabia.

In January 2022, during the induction ceremony of PNS Tughril, a multi-role frigate from China, Pakistan Navy also inducted 10 Sea King helicopters which would help Pakistan in its combating capabilities in safeguarding the territorial integrity and the maritime interests of Pakistan. President of Pakistan during the occasion stressed that Pakistan was a land of peace and urged security and stability in the region. Sea King, an American twin-engine anti-submarine helicopter by Sikorsky Aircraft, is indicative of US-Qatar security cooperation in the Gulf and the middle east.

Four takeaways from current developments in the Pakistan-Qatar relationship.
One, following the US gravity. US security cooperation with Qatar is in a range of regional security issues. Being a member of The Global Coalition against Daesh, it has provided basing facilities to support U.S. military operations throughout the Middle East. Seeing the US shift to another side of the shore in the Gulf of Oman to Qatar from Pakistan, the geopolitical objectives are against al-Qaida and its regional and global affiliates. Pakistan, a major beneficiary during the cold war and war on terror can not afford an altogether halt on counter-terrorism cooperation with USA and Qatar becomes that bridge for Pakistan to remain hinged with larger US geopolitical ambitions, which is also indeed a balancing act vis a vis China by Pakistan.

Second, balancing act to weigh the influence of Saudi Arabia in the country. Pakistan imports a major portion of its energy requirements in the form of oil from Saudi Arabia. Energy diversification and long-term commitments with Qatar give Pakistan a space to retain its sovereignty which has sung the chords of Saudi Arabia-led order in the middle east. Qatar has invested and has a shareholding in Port Qasim Power Plant, China’s Power Construction Corporation (51 per cent) and Al-Mirqab Group (49 per cent) are the shareholders. Qatar is also willing to invest in the expansion of merchant LNG terminals in Pakistan, however, that depends on LNG storage capacities and desired demand.

Third, an analysis by Al-Jazeera makes it point to take note of the developing ‘strategic triad’ of Pakistan, Turkey and Qatar. Political, security and financial engagement between the three has evolved as a response to geopolitical changes within the broader Middle East and South Asia. Turkey and Qatar have witnessed the heat from all the major political powers in the middle east and a hinge through projects and capacity building in Pakistan provides them with due recognition of their capacities. Pakistan’s rather careful approach to issues in the Muslim words due to its demography makes it a case for all three to calibrate their objectives of national prosperity and growth. Qatar was the fourth largest importer of Turkish military platforms and weapons and both the countries have been static customers of Turkish-made defence systems. Such a rising alternative to KSA.

Fourth, the rise of India and the traditional anti-India card of Pakistan. India is a big customer of Qatar LNG, 80 per cent of its imports are done from Qatar amounting to USD 13.6 billion for the year 2016. LNG is a critical commodity in the Qatar export market; it is hence vulnerable to voluntary backouts as the trade relations are secondary to legacy-based personal relations among political leaders. Therefore, mitigating the risk of any disruption in the supply chain from India or even Pakistan can help Qatar in damage control to its market and clinging to either of the poles in that case. However, the relative trade of Qatar with Pakistan and India is incomparable, yet Pakistan as a symbolic alternative to India politically is promising for Qatar.

Supreme Court verdict on the no-trust motion against Imran Khan
Pakistan and the US: Three factors contributing to a reset
Comment