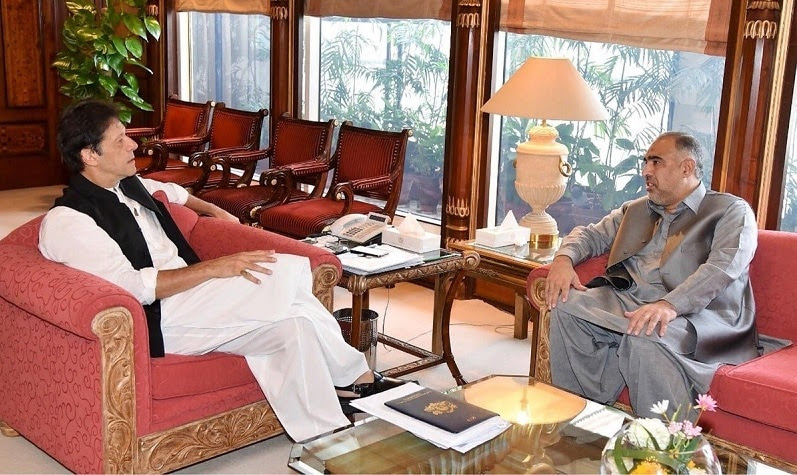 On 13 July, the Supreme Court issued a detailed judgment explaining the reasons behind its decision to set aside a ruling by former National Assembly speaker Qasim Khan Suri on 3 April which dismissed the no-confidence motion against Imran Khan. The ruling held that Suri’s ruling and the subsequent actions of then PM Imran Khan and President prima facie infringed the fundamental rights of the opposition parties and the public at large.

What does the judgment say?
The 87-page unanimous judgment issued by a five-member bench, headed by Chief Justice Umar Ata Bandial, and comprising Justice Ijaz ul Ahsan, Justice Mazhar Alam Khan Miankhel, Justice Munib Akhtar and Justice Jamal Khan Mandokhail observed that the summary dismissal of the Resolution of No Confidence (RNC) by the Deputy Speaker on 3 April 2022 on which basis the President, whilst following the advice of the PM, dissolved the NA prima facie contravened not only the express command of Article 95 of the Constitution but also repudiated the rule of law which is an indispensable foundation of parliamentary democracy envisaged by the Constitution. The judgment added that, in the result, the Deputy Speaker’s ruling and the actions of the PM and the President defeated the right of the Opposition Parties to test their voting strength in support of the RNC and if successful, to form the next Government in exercise of their fundamental right under Article 17(2) of the Constitution.

It added that rather than following the constitutional course prescribed in Article 91(4) of the Constitution for the election of a new Prime Minister, the people were unlawfully forced into an election due to the prima facie unconstitutional dissolution of the NA at the hands of the Deputy Speaker and the PM. As a result, a constitutional crisis was, therefore, created in the country on 3 April 2022.

Justice Bandial observed that the 3 April ruling failed to qualify for the protection of the internal proceedings of parliament under Article 69(1) as it was “not the outcome of a vote in the national assembly instead, it was a unilateral decision.”

Further, the court observed that no observation was made to the effect that the RNC was moved by the opposition parties or by persons in Pakistan in conspiracy with a foreign state; and no inquiry/investigation was ordered into the matter to ascertain the nature or extent of involvement of any person in Pakistan to seek or receive the support of a foreign state to move the RNC.

What does the ruling mean for Imran Khan?
Following the judgement, Imran Khan expressed his disappointment and stated that the Supreme Court should have probed the issue after President Arif Alvi shared it with the chief justice. He said, “I feel deeply hurt” by the remarks made by the court that there was no investigation regarding the threat letter, adding, “I produced the cipher before the federal cabinet. We have the minutes of the meeting. I took this letter to the meeting of the National Security Committee and even tabled it in parliament.” Additionally, Fawad Chaudhry has termed the decision ‘political’, questioning the timing of its release just before the Punjab by-elections. However, through the judgement, Imran Khan’s narrative of foreign interference has been invalidated. This means Imran Khan’s argument that foreign hand would cease to become a rallying point through which he can target the opposition.

What does the ruling mean for the ruling coalition government?
The government welcomed the Supreme Court’s decision with Prime Minister Shehbaz Sharif stating that it had exposed the “lies and propaganda” of Imran Khan and his government. He said, “Utterly shameful how Imran Khan tried to undermine the Constitution and manufactured the lie of regime change,” adding that the judgment was a “must read” for everyone. Similarly, Federal Minister for Law and Justice Azam Nazeer Tarar also welcomed the verdict stating that it would serve as an example in the future. Further, the government went on to call for the resignation of President Alvi with PML-N Senator Dr Afnanullah Khan submitting a resolution in the Senate, urging the government to initiate impeachment proceedings against President Alvi. Thus, for the ruling coalition, the judgment acts ask a means of validating their actions as well as justifying their move for a no-trust motion against Imran Khan.

Where does the question of Article 6 lie in the judgment?
Justice Mazahar Alam Khan Miankhel noted that the exercise of authority was a sacred trust which was violated by the president, then PM, the then speaker, the then deputy speaker and the then law minister. He said, “Whether these acts attract Article 6 of the Constitution (high treason) is also left open to be determined by the parliamentarians to ponder should they leave open the doors for such unconstitutional acts or take suitable measures to stop such like mess in future.”

According to legal experts, the events of 3 April cannot be termed as treason as they are not tantamount to abrogation or subversion. Experts warn that the gravity of such an offence is cheapened when it is used so casually. Additionally, they argue that it would not be wise for one elected government to charge another with treason against the state as this would set a bad precedent. Further, on the calls for the President’s resignation, experts cite Article 248(2) of the Constitution which states, “no criminal proceedings whatsoever shall be instituted or continued against the President […] in any court during his term of office.”

What does the judgment say about parliamentary proceedings?
Pakistan’s history is checkered with instances in which the Constitution was subverted, violated and held in abeyance by military rulers while the judiciary comes in to take extra-constitutional steps under the doctrine of necessity. The first hit to the Constitution comes from Pakistan’s parliamentary politics. Often elected representatives defy the political process leading to constitutional and political crises.

To strengthen parliament, there needs to be a discussion on policy issues and reach a consensus despite competing interests. However, parliament proceedings have been taken over by heated confrontations and blame games. Thus, the parliament in Pakistan has become a weak institution unable to carry out its responsibilities. The solution lies however in allowing the parliament to reign supreme. The events that unfolded on 3 April could have been avoided had lawmakers respected parliamentary proceedings and the constitution.