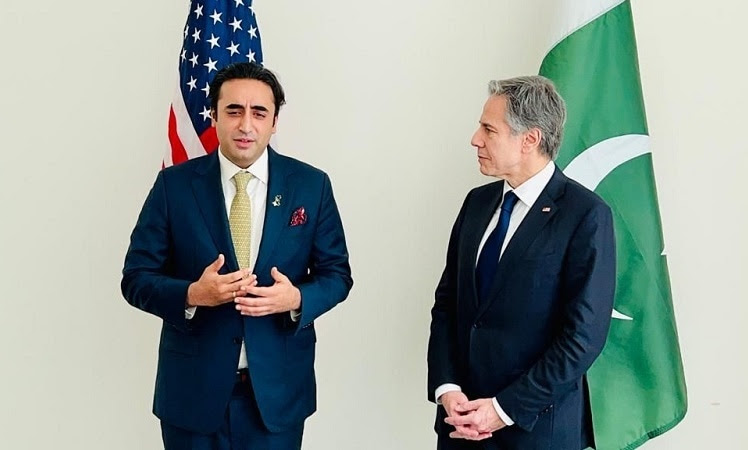 On 1 July, Prime Minister Shehbaz Sharif met with the United States Ambassador to Pakistan, Donald Blome, the first full-time American envoy in Islamabad after a gap of almost four years. During the meeting, PM Shehbaz highlighted the historic, longstanding ties between the two countries and conveyed Pakistan’s desire to further develop this relationship based on mutual respect, trust, and interest. Earlier in June, Ambassador Blome expressed Washington’s desire to move on from the regime change controversy by engaging not just with the government, but also with political leaders, business community, civil society, and youth. Further, he stated that he was committed to promoting development of bilateral trade and investment in areas of health, climate, and education. However, he maintained that the US was seeking “a strong partnership with Pakistan on counterterrorism” and is expecting Islamabad “sustained” and indiscriminate action against all militant and terrorist groups.

The resetting of ties between Pakistan and the US began in April 2022 with the new coalition government coming to power. Since then, there has been an increased engagement between Islamabad and Washington at several levels. However, these engagements came amid the accusation by Imran Khan that the Biden administration was behind the removal of his government through a no-confidence motion.

Downslide during Imran Khan’s government
The relations between Pakistan and the US were strained during Imran Khan’s term. In 2018, relations reached a low point after the Trump administration cut security assistance to Pakistan stating that it had failed to deal with terrorist networks operating on its soil. The relations improved to an extent after Pakistan helped in facilitating the talk between the Taliban and the US and later the meeting between Donald Trump and Imran Khan. However, the relations once again plummeted after Pakistan did not get attention from the Biden administration. Later toward the end of Imran Khan’s tenure the relations downslide completely with the ‘lettergate scandal’ in which he accused a US State Department official of trying to engineer regime change in Pakistan and his removal from office.

Post Imran Khan engagements between Islamabad and Washington
It began with US Congresswoman Ilhan Omar’s maiden visit to Pakistan during which she emphasis on expanding bilateral cooperation based on mutual respect, trust and equality. Similarly, the US State Department in several instances reiterated its interest in not only strengthening ties with Pakistan but also to expand and assisting the Pakistan economy through trade and investments. Additionally, the department expressed that counter­terrorism and border security are the two areas where the United States wants to continue to work with Pakistan. Meanwhile, Pakistan and US completed security level talks, as DG ISI Lt-Gen Nadeem Anjum spent three days in Washington meeting with senior security officials, including US National Security Advisor Jake Sullivan and CIA Director William J. Burns. The latest engagement includes Foreign Minister Bilawal Bhutto-Zardari’s interactions with Secretary of State Antony Blinken, the two met along the sidelines of the US-initiated UN meeting on food security in New York, the first highest-level face-to-face contact between the two sides reiterated their mutual commitment to deepen Pakistan-US ties by expanding cooperation in various sectors.

First, the Imran Khan factor. During the PTI government’s rule, Islamabad and Washington were turbulent due to the coldness Imran Khan received from both Donald Trump and President Joe Biden. Although Pakistan played an important role in facilitating the negotiation between the Taliban and the US, the ties between the two remained plagued with misunderstandings and controversies. The tension reached its height with Imran Khan blaming the US for interfering in Pakistan’s internal politics and his subsequent removal from power. However, following the exit of the PTI government, Islamabad and Washington have taken serious efforts to stabiles relations and prove that the two countries are seeking expansion of bilateral ties. Thus, in a way, the controversy spurred by Imran Khan brought Islamabad and Washington to rethink and reset their relations.

Second, the PML-N factor. Both the Pakistan Muslim League-Nawaz (PML-N) and Pakistan People’s Party (PPP) have had good ties with the US during their previous tenures. The closeness was seen soon after the coalition government took office with PM Shehbaz maintaining that Pakistan cannot afford to have enmity with the US and the latter affirming to increase bilateral cooperation. This was followed by a series of engagements at several levels including military and business engagements. Thus, the coalition government would continue to build on the closeness and use its previous connections to reset the strained relationship.

Third, the counterterrorism factor. The US sees Pakistan as a key partner in its counterterrorism operations. Following the withdrawal from Afghanistan, the US has sought to restore security assistance to Pakistan, particularly with regard to counter­terrorism and border security. This has largely been the base of Pakistan-US relations in the past and has once again become a factor that has pulled the two sides to cooperate.

The resetting of ties between Pakistan and the US is not going to be an easy task. While there is much potential in bilateral ties between Islamabad and Washington the undoing of the past will be a challenge to both administrations. Given that both sides have expressed their desire to reset the ties, substantial efforts would have to be taken to regain the momentous and stabilize the relations. This said the relations between Pakistan and US are likely to remain largely security-centric as this is in the interest of the US. However, Ambassador Donald Blome during his visit to Karachi stressed enhancing economic and trade relationships, if this were to happen and the relations move beyond security, Pakistan and the US would establish and set in place a better bilateral relationship.

Pakistan Reader is an academic exercise at the National Institute of Advanced Studies (NIAS) in the Indian Institute of Science Campus, Bangalore, India. The objective of this alert – “Pakistan Reader – Evening Brief” is to update the readers on contemporary developments within Pakistan, on a regular basis. The PR Evening Briefs are a part of the focus on Pakistan at the International Strategic and Security Programme (ISSSP) within the NIAS