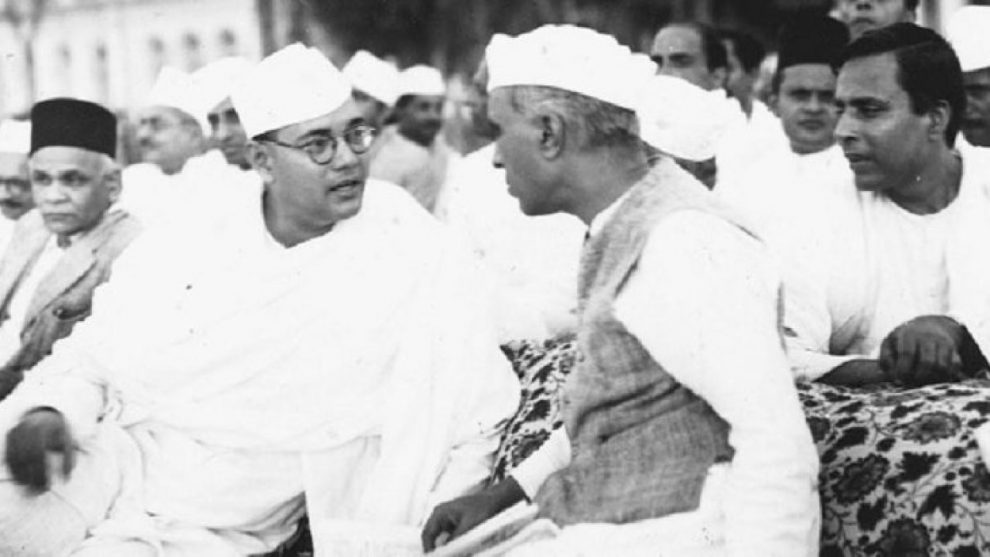 THE FIGHT FOR THE CONGRESS PRESIDENCY

The adage that ‘power corrupts’ is a recognition of human frailty – even if it is somewhat doubtful that absolute power corrupts absolutely, for who in the world has absolute power and what is really meant by ‘absolute power’ or for that matter ‘absolute corruption’? It could have been said rather, more accurately, though less dramatically, that power corrupts and more power often corrupts yet more. Despite the simplicity of his hermitic attire and living conditions, Gandhi too enjoyed power and the trappings of power after his own fashion. In the political sphere possibly the most shocking exhibition of the dictator hiding within the saint came to light when he overruled by Gandhian diktat the democratic election of Subhash Chandra Bose as Congress Party President.

Even Sunil Khilani, social historian and great admirer of the Mahatma, writes about how Gandhi subverted the democratic idea on very many occasions. ‘For the duration of Gandhi’s dominance, from 1920 until the early 1940’s,’ Khilnani writes, ‘Gandhi preferred not to be a formal member of the Working Committee, yet he used it repeatedly to push through decisions that contradicted the wishes of party members. Most conspicuous was his removal of Subhash Chandra Bose from the elected office of Party President in 1939. He goes on to elaborate how Gandhi did establish a culture of dialogue within the Indian National Congress but his fierce disciplinary regimes – fasts, silences and penances – gave him a grip on the party that relied at once on coercion and seduction. Khilnani writes: ‘These were the immensely effective techniques of an eccentric parent, but they were not designed to nourish commitment to democratic institutions.’

As regards Bose’s election Gandhi had in fact nominated someone else to be the candidate for Party President that year, and suggested that he be elected unopposed. Bose had not fallen in line with the saint’s wish and decided to contest the election, which he won hands down. On 29 January, 1939 Bose was elected Congress Party President. Despite this victory, he could not properly savour its taste. Gandhi was extremely unhappy and declared: ‘Sitaramayya’s defeat is my defeat.’ Two swords cannot be placed within a single scabbard, as the Persian saying goes. Bose was compelled to leave the party. Possibly two diametrically opposed strategies for independence could not coexist within a single party. Even so, was this not hypocrisy on the part of the Mahatma? If he didn’t want anyone else but the person he nominated to be President of the party, why suggest the charade of an election?

Netaji was forced to resign because despite winning the Presidency of the party in a fair and open election, he became a President without a Working Committee. Gandhi would not accept his proposal that a composite Working Committee be formed with him and Sardar Patel nominating an equal number of candidates. Rudrangshu Mukerjee writes on how ‘Gandhi emerges from this episode at his worst: petty and given to machinations, the archetypal Tammy Hall politician, his moral posturing notwithstanding.’

What were Gandhi’s misgivings? At one level he differed from Subhash’s view that conditions in India were ripe for an ultimatum to the British and at another ‘somewhat shadowy level was the presence of GD Birla’ who disapproved of left leaning views.

Thousands of Bose fans were immensely disappointed, even furious, at Bose having been outmanoeuvred by Gandhi and forced to resign in this manner. In Calcutta during an All India Congress Committee (AICC) meet the crowd turned angry when the news of Subhash’s resignation spread. In fact Subhash had to personally escort many Congress leaders to ensure their safety. The great Bengali poet, Rabindranath Tagore expressed solidarity with his attitude and hailed him a true leader of India. Subhash wrote to his wife Emilie to say: ‘I have not lost anything by resigning. As a matter of fact I have become more popular now.’ In the next letter to her, he noted, ‘India is a strange land where people are loved not because they have power but because they give up power. For instance at Lahore I had a warmer reception this time than when I went last year as Congress President.’

It could be argued that Bose had a view different world view from Gandhi’s proclaimed non-violent approach, and so despite his popularity they could not have co-existed in the same institution. At the same time, it is saddening how over the years, the primacy of Gandhi in the struggle for Indian independence notwithstanding, Bose’s contributions have been neglected. A little later in this book we will discuss unsubstantiated rumours that Nehru allowed Bose to die in a Soviet prison. Be that as it may, there can be little doubt that part of the reason why Bose has become a shadowy figure on the margins of Indian history, instead of receiving his just due as being one of the major architects of Indian independence is owing to the fact that Gandhi’s protégé Nehru, who became prime minister of the new India allowed this to happen. Bose was no supporter of fascism, much less of Nazism but he supported the Germans and the Japanese in the World War because from his perspective it was the British who were the Nazis of India.

GIANTS OF THE INDIAN FREEDOM MOVEMENT

A century ago, the Dalit leader BR Ambedkar wryly noted how ‘quite recently a new ‘ism’ had come on the Indian horizon. It is called Gandhism.’ He adds that ‘(i)t is true that very recently Mr Gandhi has denied that there is such a thing as Gandhism. This denial is nothing more than the usual modesty that Mr Gandhi wears so well. It does not disprove the existence of Gandhism.’ In fact in a letter to Subhash Chandra Bose dated 30 March, 1939, the Mahatma himself uses the expression ‘Gandhiites’ though, typical of the man’s careful modesty, he puts within parenthesises ‘to use that wrong expression.’

Bose’s charisma was indisputable and legendary. Elected Congress Party president on two occasions, on the second occasion too he won the election hands down against Gandhi’s nominated candidate. This fact alone testifies to his charisma and popularity. Nehru on the other hand could become Prime Minister only because he was the Mahatma’s protégé. Even after Bose had left the Congress, Nehru could not garner much support. Had the Mahatma not placed his metaphorical hand over Nehru’s slender shoulders in a real time contest with Patel, the Kashmir Pandit would not have survived.

All this is not mere speculation or conjecture but a matter of historical record. With Bose out of the picture, despite the Mahatma’s clear support for Nehru, had there been a contest there is little doubt that Sardar Patel (who subsequently became Home Minister) would have been elected President of the party and would have been the first Prime Minister of India. Out of 15, 12 Congress Pradesh Committee’s the only body with the power to nominate and elect the President of the Party nominated Sardar Patel. Not a single Congress Committee nominated Nehru, but at the end of the day that did not matter. He was the Mahatma’s blue-eyed boy. Gandhi acted like the feudal lord he pretended he wasn’t and ‘advised’ Patel to withdraw his candidature. He asked Acharya Kripalani to find a proposer and seconder for Nehru’s candidacy.

The historian Rajmohan Gandhi records how ‘as soon as Nehru had been formally proposed,’ pursuant to the Mahatma’s instructions Kripalani ‘handed Patel a fresh piece of paper with the latter’s withdrawal written out on it. Vallabhbhai was pulling out, Kripalani’s draft said ‘so that Nehru could be elected unopposed.’

I mention the above episode only to show that had Bose been alive and present in India, post-independence, even outside the Congress, he would have given Nehru a run for his money for the top job in the country. Nehru knew somewhere that he could not compete with Bose on the popularity front.

Excerpted with permission from The Vanishing of Subhash Bose: The Mystery Unlocked, Rajesh Talwar, Kalpaz Publications. Read more about the book here and buy it here.

Join The Dispatch Whatsapp Group to stay updated
The Dispatch is present across a number of social media platforms. Subscribe to our YouTube channel for exciting videos; join us on Facebook, Intagram and Twitter for quick updates and discussions. We are also available on the Telegram. Follow us on Pinterest for thousands of pictures and graphics. We care to respond to text messages on WhatsApp at 8082480136 [No calls accepted]. To contribute an article or pitch a story idea, write to us at [email protected] |Click to know more about The Dispatch, our standards and policies
TagsBose Nehru Gandhi INA Netaji Rajesh Talwar Subhash Chandra Bose The Vanishing of Subhash Bose