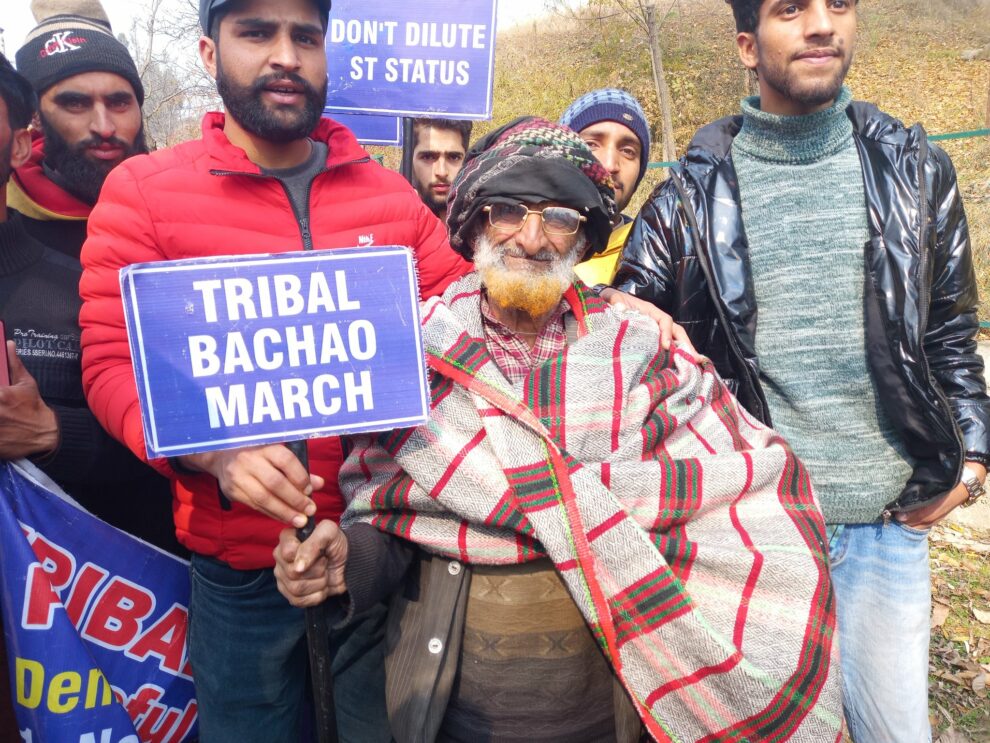 Gujjar Bakarwals, the third largest ethnic community in Jammu Kashmir resides in the marginalized areas which causes their alienation from public spaces, institutions, economic activities and social setup. The community is fighting for its rights, identity and existence, in the form of Tribals Bachao March, led by the Gujjar Bakerwals Joint Action Committee including social activists, students, and general masses.

Recently Scheduled Tribes (ST) are given with political reservation for the upcoming assembly elections. Economically well off land-owning Pahari classes in Jammu and Kashmir, who had occupied the public spaces until now and had ruled the areas, still have influence on the social, economic and political dynamics of the region. The inclusion of Elites Pahari linguistic people in ST category will make the Gujjar-Bakerwals, Gaddis, Sippis and Shinas vulnerable and will marginalized them in every sphere of life.

When subaltern tribal population is getting political reservation, the elite groups are reluctant to share the political spaces because historically these very people who are demanding ST status for the sake of unlocking the reserved ST seats were the Rajas, Landlords, and Sahukaars. They have exploited the tribal population socially, economically, morally and psychologically. The treatment of tribal community because of their nomadic way of life has pushed them to the bottom of social pyramid.

The ‘gaze’ through which upper classes had/has defined the Gujjar-Bakerwal tribal community has its own historico-anthropological vocabulary, narratives, discourses and social stigma. The whole tribal community is defined, redefined and interpreted where the elite gaze was ‘internalized’ by the tribal population on ‘community level’ as well as individual level, whose memories are a mental and psychological trauma itself until now.

For instance the Lungi or Turban, which was historically associated with Gujjar Bakerwal identity was turned into a sign of backwardness as elite groups defines it. Interestingly, turban was used by the elite groups to show the similarities of tribal attire so that they could show themselves as a ‘homogeneous group’. This was one of the stages of superficial identity creation to influence the visual perception of the society. These heterogeneous linguistic groups, which call themselves a Qabila or Tribe, come together by wearing Turban and try to makes itself a homogeneous group for the sake of political power.

In 1991, Gujjar Bakerwal tribe got 10 percent reservation, which it is sharing with 10 more tribal groups which are Balti, Beda, Bot (or Bota), Brokpa-Drokpa-Dard-Shin, Changpa-Garran, Mon, Purigpa, Gaddi and Sippi. When some of the limited benefits of reservation in job and spaces were reclaimed by the tribal Gujjar-Bakarwal community, by facing a lot of barriers like mental trauma, militancy, social and political exclusion, it resulted in creation and reclaiming of public spaces.

The present insecurities of upper elite classes and their derogatory remarks against whole tribe is reflection of true sociological behavior of the past, which was a normal of that time. From militancy to negotiations with elite groups, this Community has long history of subjugation and systematic marginalization.

Lack of media coverage and normalization of the word ‘Qabila’ or Tribe.

Because of absence of media persons in Gujjar Bakerwal tribal community, the narrative is repeated by the local media to such a level, using the terms ‘Pahadi’ tribe or ‘Qabila’, that the association of word ‘Qabila’ with ‘Pahari’- two heterogeneous linguistic groups- is normalised in the popular vocabulary, for which there is no any historical justification with sound historical or anthropological evidences. 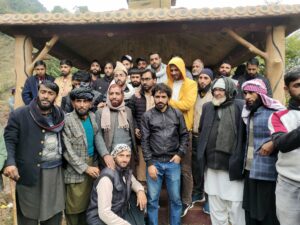 The Tribal community has challenged the reduced definition of ‘self’ through creating various spaces and mediums. For instance, the orality was transformed into “literary traditions’, particularly Siharfi tradition, where “lamentation” as a theme is profoundly rooted in the popular experiences of community as a whole and on individual level as well. The bitter social experiences of the past are reflecting in the unique oral and literary tradition known as ‘Siharfi’, a kind of poetic composition written in Gojri language by using Persian script.

Poets like Khuda Baksh Zaar (1888-1982), Shams Din Mehjoor (1892-1984), Sain Faqar Din 1903-1987), and Choudhary Hassan Din Hassan(b 1916), are the finest poets whose kalam/poetry is dominated by a deep lament which is faced by the community because of natural (while crossing the difficult passes and terrains, hailstorm, icy winds and landslides are very common) and manmade disasters (social stigma, exploitation, oppression and subjugation).

Here is an example of the prevailed society where elites were plundering the subjugated subaltern masses, most of them Gujjar-Bakerwals, as written by Sain Qadar Baksh (1858-1938) in the form of Siharfi.

(Together by police, forest department, and Patwaris, Poonch is looted and plundered systematically
Masses are plundered by united Nambardars, Zaildars are torturing the public
Rich shopkeepers have created vicious web, blood of the Poor’s is sucked by elite traders
O Qadar Yar,the survival of Poonch is almost negligible, Hunters (Elite) are hunting (poor masses) ruthlessly).

The political consciousness among the subjugated tribal population which was created by the efforts of Gujjar-Bakerwal leaders like Ghulam Hussain Lassanvi, Mian Nizamuddin Larvi, Meher Din Qamar, Choudhary Diwan Ali, Mian Bashir Ahmed etc, has faded away with the passage of time. The carving of political Territories on the votes of poor tribal Gujjar-Bakarwals by many well-off political families of the same tribe is a silence of its own kind. When the tribal community is at the crossroads of their marginalization and identity, these very leaders are silent. They are mere spectators who are enjoying the game of oppressors (elite groups and oppressed tribal population). The tribal leadership to which ST population was considering as the shield is no more a shield, but the silent Mir Qasims and Mir Jafars. The struggle for existence is the real challenge but the real leaders are students, activists, and Old citizens who are comprehending this deep issue.

1 Foucault, Michel (1982). ‘The Subject and Power’. University of Chicago Press.

5Trouillot, Michel-Rolph (1995). “ Silencing the Past: Power and the Production of History,Boston: Beacon Press.

Transhumant and Pastoralism in the Northwest Himalayas,Gulshan books Srinagar.

9 Kapoor ,Anuk, Satwanti (eds.) in ,“Ecology and transhumance in the Himalayas”,M.D.Publication,New Delhi.