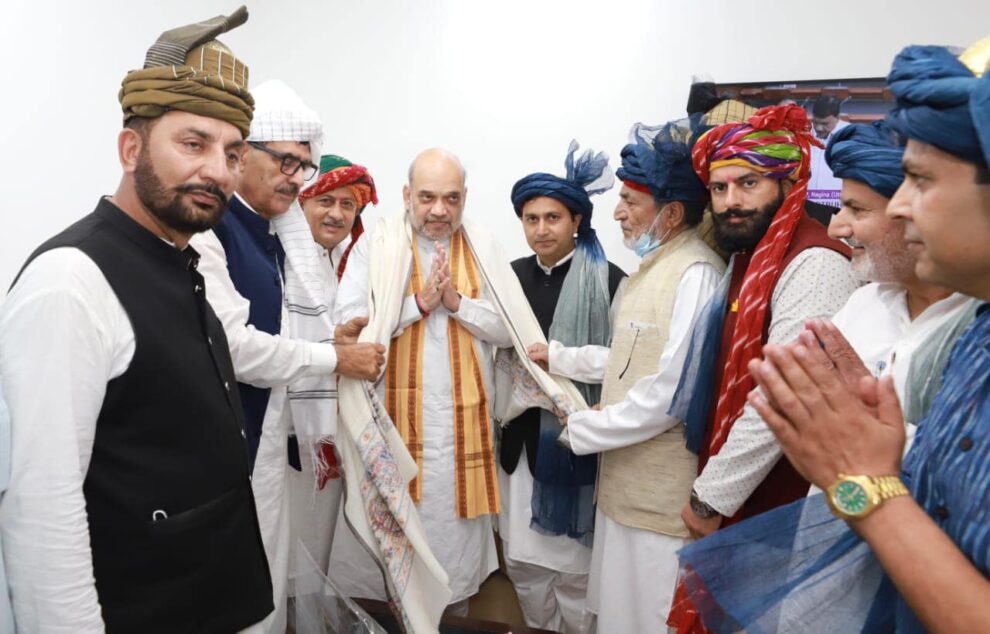 After a brief lull, political tension is back between the Gujjars and the Pahari-speaking communities of Jammu and Kashmir. Drawn on the chessboard laid by BJP’s electoral arithmetic, the Pahari leaders appear to have cornered their Gujjar counterparts with electoral ambitions.

A group of leaders from the Pahari-speaking communities, almost all of them owing allegiance to the ruling Bhartiya Janta Party, met with Home Minister Amit Shah in New Delhi last week. After meeting with Shah in his Parliament House chambers, the Pahari leaders claimed that Shah has committed to them their inclusion in the list of Scheduled Tribes and a formal announcement is coming up soon.

The Parliament that was live for the Monsoon Session has been adjourned sine die with no proposal before it for including the Pahari communities of Jammu and Kashmir in Scheduled Tribes. There is no statement to this effect from the Home Minister’s Office but the absence of denial of the claims made by the visiting Pahari leaders has the politics in hilly areas of Jammu and Kashmir re-energised around caste and language.

The Gujjars, who were included in the list of STs around three decades, are vehemently opposed to extending similar concessions to the Pahari-speaking people. They have challenged the demand of Paharis on a number of counts which includes language not being the basis of identifying tribes.

“For all those who today call themselves as Pahari tribesmen, the Gujjars were untouchable and denied social equality”, alleges Advocate Anwar Chowdhary who addressed a press conference in Jammu on Tuesday. Anwar said Gujjars fought for several decades to finally get recognized as scheduled tribes in 1991. “In the initial years the Paharis would often humiliate Gujjars for being declared as scheduled tribes but when the social profile of Gujjars began to improve the Paharis started demanding similar status for themselves”, alleged Advocate Anwar who went on to say, “the whole demand of Paharis stem from their lack of tolerance for the Gujjars”.

As the Gujjars and Paharis make competitive claims to their ‘rights’, both play on the chessboard of BJP’s electoral arithmetic.

Gujjars have been a genuinely exploited lot in Jammu and Kashmir with their identity misused for political purposes by almost all parties, including Congress and the BJP. It was a small window of a non-Congress government at the Center and Governor’s rule in Jammu and Kashmir that Gujjars could get included in the Scheduled Tribe in 1991.

Besides other concessions and constitutionally mandates quotas, the STs also get reservations in the legislatures proportionate to their population. However, this was an exception in Jammu and Kashmir where the regional parties, such as National Conference and in the later years the Peoples Democratic Party, were always averse to see Gujjars rising as a power block. The inter-district recruitment Bill is one such example that laid bare the anti-Gujjar bias of NC and PDP.

August 5, 2019, came as a silver lining for the Gujjars as the Jammu and Kashmir Reorganisation Act promised reservation to the STs in the legislature. Subsequently, the Delimitation Commission has set aside nine seats for STs.

The Gujjars are grateful to the BJP for this long-awaited justice. Several community members have made their feelings of gratitude towards the BJP known. For a couple of years after the August 2019 events, the BJP made massive outreach to the Gujjars, appreciating their issues and speaking in their language. But this entire exercise does not entirely translate into votes which the BJP badly needs to form government in Jammu and Kashmir.

With multiple and competitive stakeholders in the plains of Jammu and in the Kashmir Valley, the Paharis are the major bulk the BJP needs to take along. While Gujjars have been a little reluctant, a number of prominent faces from the Pahari communities have joined BJP and are taking pride in having done that.

The BJP is now promising ST to the Paharis which looks more possible than ever before despite a number of legal, social, and political difficulties this move may result in. There is, however, very little the Gujjars appear to be capable of doing to oppose this anymore.

Where are the Gujjar leaders?

In turban headgears, the Pahari leaders from almost all parties are conspicuous by their presence at all relevant platforms. Even those who are with other parties are not afraid of walking with BJP arms in arms. On the contrary, the Gujjar leaders who are strongly opposed to the inclusion of Paharis in ST have maintained a complete silence even as they encourage the new breed of ‘activists’ and other vocal voices on social media to build an opposition to this move. No Gujjar leader, no matter whichever political party he is affiliated with, wants to be seen as opposed to the demand of Paharis.

Since five of nine Assembly constituencies reserved for STs are in the areas with the highest population concentration of both communities, the Gujjars bank heavily on the Pahari voters and, therefore, don’t want to annoy them. In the current scenario, when Paharis are yet to be recognized as STs, each of these constituencies will have all Gujjars contesting against each other. With division of Gujjar votes between them, the one who enjoys the support of Pahari-speaking people will have a better chance of winning. It is in this background that one does not see any major Gujjar leader publicly opposing the demand of Paharis even as they don’t want this to happen.

Worries are writ large in the Gujjar WhatsApp groups with heated discussions on the rules governing the identification of scheduled tribes. Political fallouts and consequences for social order are also being discussed but politicians, who have to contest elections, don’t want to register comments for the fear of screenshots being smuggled out.

Not only the traditional and established leaders who have remained legislators and Ministers, the new age Gujjar leaders who hope to contest elections have chosen silence as strategy. “Leave aside taking a delegation to the Home Minister or the Lieutenant Governor to apprise them of our viewpoint, the Gujjar leaders are even scared of sitting together for a meeting”, said once activist who didn’t wish to be named.

What if Paharis are recognised STs?

As far one goes back to track the competitive demand, the economic and social conditions of communities have hardly appeared as one’s genuine concern. It is mainly about political power. The Gujjars despite their claims of being twenty percent of Jammu and Kashmir’s population had only two members in the Assembly following 1996 elections. This figure went up to four in 2002, five in 2008 and six in 2014. With the latest Delimitation award, the Gujjars have at least eight secure seats. Once the Paharis are STs, the Gujjars and they will be the same political actors in the region. With leaders calculating on the electoral prospects, the ordinary community members watch the show with little interest.

Join The Dispatch Whatsapp Group to stay updated
The Dispatch is present across a number of social media platforms. Subscribe to our YouTube channel for exciting videos; join us on Facebook, Intagram and Twitter for quick updates and discussions. We are also available on the Telegram. Follow us on Pinterest for thousands of pictures and graphics. We care to respond to text messages on WhatsApp at 8082480136 [No calls accepted]. To contribute an article or pitch a story idea, write to us at [email protected] |Click to know more about The Dispatch, our standards and policies
TagsGujjars of Jammu Kashmir ST Pahari speaking