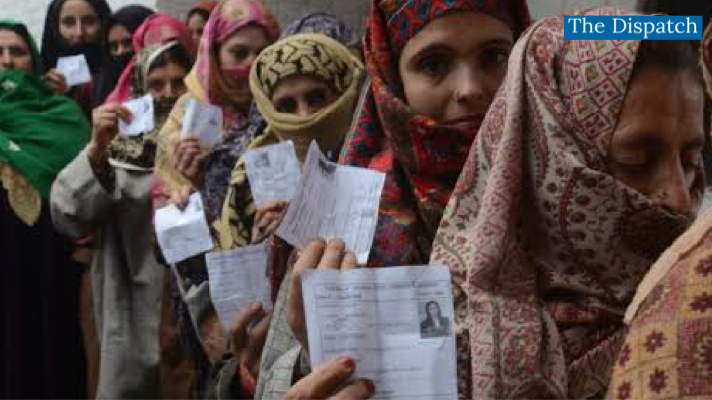 Jammu:  As the Center chooses to be silent on holding elections in Jammu and Kashmir, the revised schedule for Special Summary Revision announced by the Election Commission of India suggests that the country’s newest Union Territory may still have a long wait for polls to its first Assembly.

The office of the Chief Electoral Officer of Jammu and Kashmir informed on Tuesday that the ECI has notified the schedule of Special Summary Revision with reference to October 1, 2022, as the qualifying date in Jammu and Kashmir with an opportunity for youth attaining 18 years on it (qualifying date) or earlier to become part of voters list in the Union Territory.

The ECI notification issued in this regard on August 8, 2022, was in continuation to its earlier notification dated June 29, 2022, the CEO of Jammu and Kashmir. As per its notification, November 25, 2022, has been set as the deadline for publication of final electoral roll, after due disposal of all claims and objections filed within the stipulated time period.

With November 25 as deadline for publication of final electoral rolls, it is highly unlikely for the circumstances to permit an electoral exercise soon after. Towards the third week of December, most parts of Jammu and Kashmir get hit by intense winter with snowfall leaving many areas inaccessible.

Holding elections in the peak winters is difficult not only from the logistical point of view but also from the security perspective. The security agencies have in the past also advised the Commission against any large electoral exercise in winters. The 2014 elections, it may be recalled, were completed before December 20, the onset of harsh winter.

While the SSR schedule clearly stretches to the Spring of 2023 the first available ideal schedule for elections, there is another technical reason to go along with the current delay. The Delimitation award had recommended reservation of Assembly seats for Kashmiri migrants and the displaced persons from Pakistan occupied Jammu and Kashmir. A unique recommendation with no past precedence, there is a lack of clarity on this process -whether the seats to be increased beyond 90 by amendments to the Jammu and Kashmir Reorganisation Act? The Monsoon Session of Parliament had adjourned sine die with no such proposal before it.

The Election Commission shall be able to take a call when the government had taken a decision on the Delimitation Commission recommendations (pertaining to hike in number of seats in two categories) and when the final draft of the revised electoral list is available.

Join The Dispatch Whatsapp Group to get the latest news updates

Jammu and Kashmir is without legislature since June 2019 when the state government headed by PDP leader Mehbooba Mufti had fallen following withdrawal of support by her alliance partner BJP. A year later, the state was downgraded and bifurcated into two Union Territories on the eve of withdrawal of its special status on August 5, 2019.

What is Election Deptt in J&K doing?

At present the pre-revision activities as well as post delimitation follow up work is going on in Jammu and Kashmir, wherein the existing electoral rolls are being mapped into the newly delimited assembly constituencies as per the Delimitation Commission’s final order made applicable by the Union Law Ministry w.e.f. 20th May 2022. As part of the Pre-Revision activities, the process of Rationalization/Re-arrangement of Polling Stations, Removal of discrepancies of Demographically Similar Entries/Photo Similar Entries, Duplicate EPICs, Preparation of Supplements and integrated draft roll with reference to 01.10.2022 as the qualifying date is going on at present in the UT of Jammu and Kashmir.

ALSO READ: What do we know, so far, about elections in Jammu and Kashmir?

The Election Commission of India, in pursuance of the legal amendments in the Section 14(b) of the RP Act 1950 and consequent modifications in Registration of Electors Rules, 1960, whereby a provision for four qualifying dates i.e., 01st January, 01st April, 01st July and 01st October as eligibility for youngsters to register in electoral rolls as opposed to the earlier single qualifying date of 1st January only has been made, notified the Special Summary Revision(SSR) exercise for the UT of Jammu and Kashmir with reference to 1st October, 2022 as the qualifying date. This means that any person who attains the age of 18 years on or before 1st October, 2022 and is otherwise qualified to be enrolled as an elector in the Electoral Roll, can apply for his registration in the Electoral Roll during this SSR.

The integrated draft Roll with reference to 01-10-2022 as the qualifying date shall now be published by all EROs of the UT on 15th September, 2022, marking the formal beginning of the revision activities.

The revision activities which shall begin on 15th September, include disposal of claims and objections received after publication of integrated draft electoral roll. In order to provide more opportunities to the youth of Jammu and Kashmir the Commission has extended the period for filing of claims and objections from 30 days to 40 days i.e. 15th September to 25th October, 2022.

ALSO READ: BJP on their side, Pahari leaders have effectively put their Gujjar counterparts in spot

During this period Special camps shall also be organized by CEO Jammu and Kashmir on weekends for which the date will be publicized separately. During this period of filing claims and objections any person desiring of getting his/her name included in the Electoral Roll or desiring to file any other claim for correction of an entry or any objection against any entry in the electoral roll shall have multiple platforms available for doing so, viz; Offline Mode, by filing a hard copy of the claim/objection in the prescribed Form before the ERO/AERO or BLO concerned. Online Mode, by logging into https://www.nvsp.in portal or by downloading Voter Helpline App (VHA).

The final electoral roll after due disposal of all claims and objections filed within the stipulated time period shall be published on 25th November, 2022.

With the new amendments in the Law, the Commission has also made the registration Forms more user friendly and simpler. The newly modified Forms have come into force with effect from 1st August, 2022. Now, the Form 6 which was earlier being used for Registration of new electors and for shifting from one constituency to another constituency, shall be exclusively used for registration of New electors. There is no change in Form 6A. Form 7 which is used for objection to Proposed inclusion/for deletion of a name in Existing Electoral roll shall remain to be for the same purpose with a slight modification that a provision for attaching a death certificate has also been incorporated. Form 8 has under gone a major change. Form 8 now can be used for multiple purposes, viz; correction of any particulars in the roll, shifting of residence (within or outside constituency), Replacement of EPIC, and Marking of Person with Disability. Form 8A which was earlier used for shifting within constituency has been abolished now, as the same provision is made in the new Form 8. In addition to these a new Form 6B has been introduced for capturing Aadhaar number of the existing electors. All Forms (wherever required) have been suitably modified to capture Aadhaar number from the new electors.

For linking of AADHAAR number with Electoral Roll data, provision has been made in the modified registration forms to seek Aadhaar details of electors. A new Form-6B has also been introduced for collecting Aadhaar number of existing electors. However, no application for inclusion of name in electoral roll shall be denied and no entries in electoral roll shall be deleted for inability of an individual to furnish or intimate Aadhaar Number. It has been emphasized that while handling Aadhaar number of the applicants, the provision under Section 37 of the Aadhaar (Targeted Delivery of Financial and other Subsidies, Benefits and Services) Act, 2016 must be adhered to.

Under no circumstances should it go public. If the electors’ information is required to be put for public display, the Aadhaar details must be removed or masked. A Time bound drive is being started for collection of Aadhaar number of the existing electors by or before 01-04-2023.

Furnishing of Aadhaar number is purely voluntary. Objective of the programme is to establish the identity of electors and authentication of entries in Electoral Roll.

Join The Dispatch Whatsapp Group to stay updated
The Dispatch is present across a number of social media platforms. Subscribe to our YouTube channel for exciting videos; join us on Facebook, Intagram and Twitter for quick updates and discussions. We are also available on the Telegram. Follow us on Pinterest for thousands of pictures and graphics. We care to respond to text messages on WhatsApp at 8082480136 [No calls accepted]. To contribute an article or pitch a story idea, write to us at [email protected] |Click to know more about The Dispatch, our standards and policies
Tags2019 Article 370 August 5 Elections in Jammu and Kashmir

Security forces recover 25-30 kg IED in Pulwama: Police
BJP on their side, Pahari leaders have effectively put their Gujjar counterparts in spot
Comment