The news about Nahida’s successful summit was made public by Transcend Adventures, the company with which she had gone for her maiden attempt to scale the Everest. 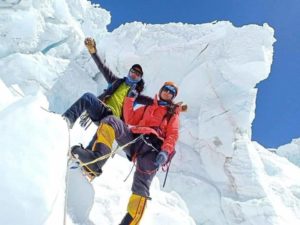 “The Fourth summit of the day is Nahida Manzoor along with her Sherpa Guide Nima Kancha. Nahida hails from the state of Jammu & Kashmir. The 26-year old lady has been passionate about the snow peaks and took to the mountains at a very young age,” Transcend Adventures posted on their official Facebook page.

Nahida along with her group had left from Everest Base camp for the summit on Saturday and on Tuesday she made successful summit of the peak.

The experienced trained mountaineer had on March 4 started crowd funding to support her dream journey.