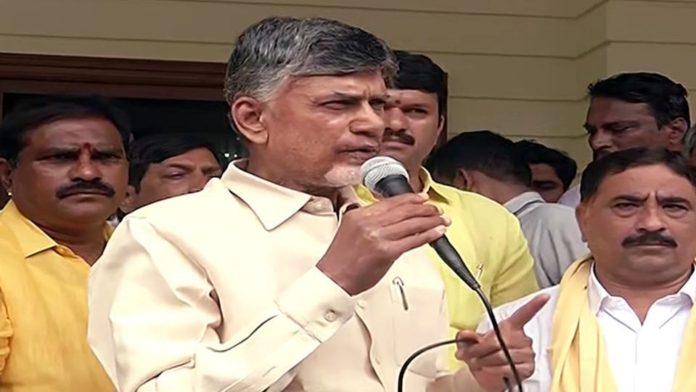 TDP chief N Chandrababu Naidu on Thursday condemned the house arrests of party MP Kesineni Srinivas and MLA Buddha Venkanna in Vijayawada and said that the YSRCP government will pay for its ‘unilateral, dictatorial and suppressive attitude’.In a statement, he termed the steps as undemocratic and unilateral.

“It is undemocratic to prevent the public representatives from going to a meeting of Amaravati Parirakshana Samiti Joint Action Committee. The YSRCP government is creating panic among the people of 29 villages. Thousands of police personnel are deployed and are made police raj. They made the capital, that ran smoothly for the past five years, controversial”, he said in a statement.

“They are trying to gain political mileage with divisive politics. Freedom of expression is being suppressed. YSRCP government will pay for its unilateral, dictatorial and suppressive attitude”, the former Chief Minister said.This morning Vijayawada police had house arrested TDP MP Kesineni Srinivas and MLA Buddha Venkanna.

The police were apprehensive that the public representatives would take part in a dharna at Prakasam Barrage, called by ‘Rajadhani Parirakshana Samiti’.