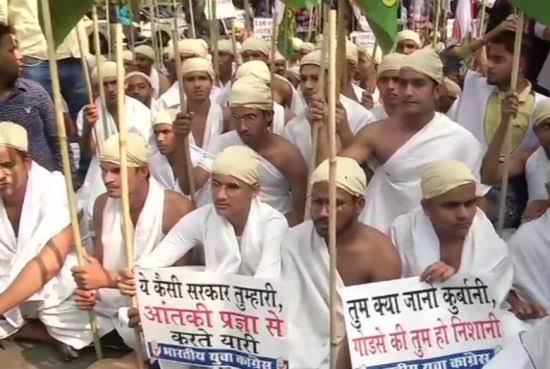 Youth Congress workers dressed as Mahatma Gandhi staged a protest on Friday against BJP MP Pragya Thakur over her remark referring to Nathuram Godse as a patriot in the Parliament.

Earlier on Thursday, as many as 50 MPs including Adhir Ranjan Chowdhury, Dayanidhi Maran, Manicka Tagore, and NK Premachandran gave a letter to Lok Sabha Speaker Om Birla to censure BJP MP Pragya Thakur for insulting Mahatma Gandhi. Thakur, a first-time MP from Bhopal had triggered uproar when during a discussion in the lower house on the Special Protection Group (Amendment) Bill, she interjected DMK member A Raja with a remark purportedly in praise of Mahatma Gandhi’s assassin Nathuram Godse.

However, later on, she claimed that she was referring to Udham Singh. Speaker Om Birla expunged Thakur’s remark from the record but opposition members protested outside the House.
Earlier this year, she described Godse as a ‘patriot’ and Prime Minister Narendra Modi had made it clear that such statements would not be tolerated by the party.