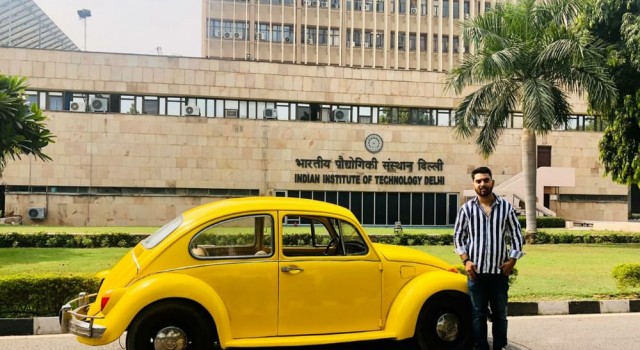 Bhaderwah, Nov 21: A 23-year old engineer from Bhaderwah area of Doda district has created history by becoming the first person in India to convert a 1948 model Volkswagen Beetle car into an electric car.

Mohammad Jawad Khan, a resident of Gatha village of Bhaderwah and alumni of Swami Vivekananda Institute of Engineering and Technology had last year manufactured a solar car named SVIET Volta.

He said during COVID-19 lockdown he started his workshop named Tadpole Projects Pvt. Ltd. and started working on a project of the Centre of Excellence for Research on Clean Air (CERCA) under the Indian Institute of Technology (IIT) Delhi.

“After working continuously for around eight months, I completed this project and became the first person in India to convert the vintage car into an electric car,” he said, adding that he can convert all vehicles whether light or heavy motor vehicles into electric vehicles and it will help in controlling air pollution.

He said that the mileage of the car will depend on batteries and its mileage will range from 50 km to 300 km. “Its charging will take just a few hours besides that car works on a manual gear system and can be controlled through the phone by using Bluetooth dongle.”

He said that despite coming up with many innovations so far and working on many others, there has been no government support for him. “I have contacted higher authorities to provide me support so that I can help move forward, however, they haven’t shown any interest so far.”

“I am working on a project and if the government can support me, I will generate electricity from small dams which can give 24×7 power supply to the villages and it will work for decades,” he said.

Jawad also thanked Arun Duggal founder of CERCA for reposing faith in him and giving him a chance to work on this project. “I am hopeful that he will help me in future as well.”

Jawad’s father is a store owner while his mother is a government teacher and he is the first engineer from his family.

“Presently, I am getting good offers outside J&K but I want to do something for my area like convert electricity from micro dams to provide electricity to far off places here. I am waiting for a positive response from the concerned authorities,” he said—(KNO)