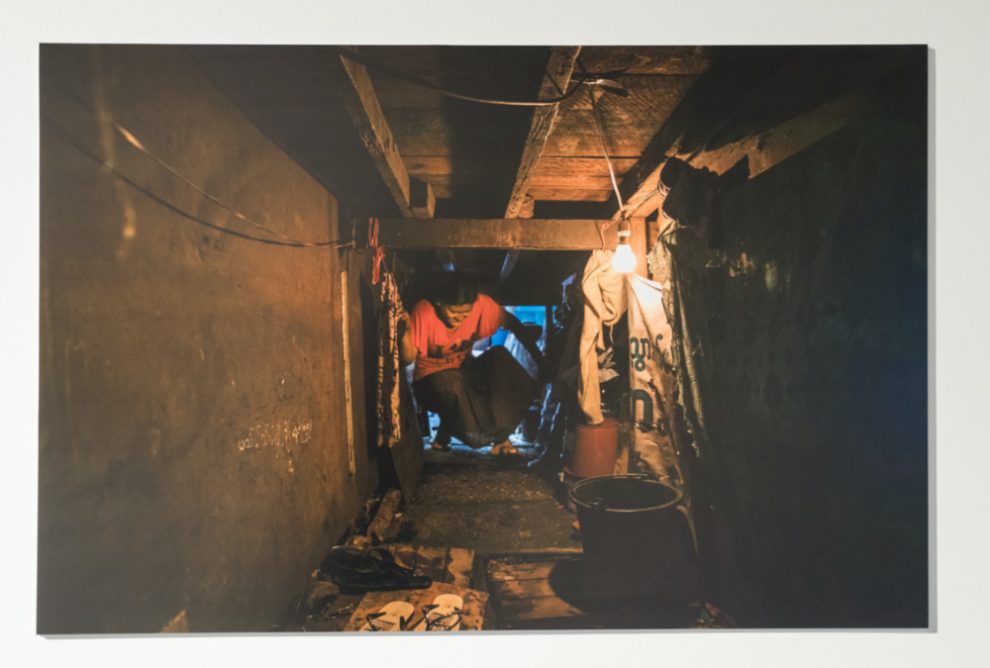 Titled “Below Three Feet”, Myanmar photographer Kaung Swan Thar’s images are showcased alongside those of more than 80 artists at the Bangkok Art Biennale (BAB) – one of the few large art festivals to be held this year amidst the COVID-19 pandemic.

The photographs show families of low-income migrant workers living in 0.9 square metre (10 square feet) spaces that are only about 0.9 metres (3 feet) high, underneath the staircases of homes near the Yangon railway station.

“They are squashed like sardines in these spaces, where electricity, hygiene and water are always challenges – and particularly relevant now, in the pandemic,” said Apinan Poshyananda, artistic director of BAB, which runs until Jan. 31.

“The images are striking and poignant, and we displayed them in Bangkok One – a wealthy development – to show the contrast with its surroundings, which is the reality in many of our cities,” he told the Thomson Reuters Foundation.

For Kaung Swan Thar, 24, discovering the cramped spaces and the people who lived in them was a revelation, he said.

They are rented out illegally by landlords to migrants who come from rural areas in search of jobs, he said. About 60 families pay a monthly rent of 30,000 kyats ($23) or a daily rent of 1,500 kyat for these spaces.

“I was shocked. I never thought that there would be people living this way in the middle of the city,” he said on Myanmar’s former capital.

“There is no written contract. So if they do not keep a good relationship with the landlord, they may be kicked out at any time,” he added.

With growing migration from rural areas, Yangon’s population is forecast by the United Nations to nearly double to more than 11 million by 2040, placing an enormous strain on resources including housing.

The government estimates that the city will need more than 1.2 million new housing units by 2040 for migrants and slum dwellers.

City authorities had pledged to solve the “squatter problem” by the end of 2020 with adequate low-cost housing.

But that promise will not be met, according to housing rights groups.

The workers in Kaung Swan Thar’s images are mostly street vendors, rickshaw drivers, and rubbish collectors, he said, and were among the groups hardest hit by the coronavirus.

“For them, social distancing is not possible, and they share common toilets and water taps,” he said.

“The lockdown has led to loss of jobs and incomes, and because they do not live in legal homes, they could not receive any government benefits for COVID-19.”

With the fast pace of development in Yangon, even these homes may soon be gone, said Kaung Swan Thar, forcing the workers to move farther away from the centre of the city.

“For them, being in the downtown area makes it easier to find work. Even when they have to live like this.”