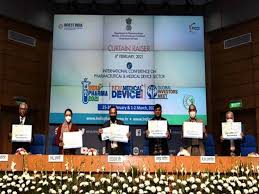 Srinagar, Feb 04: The Ministry of External Affairs (MEA) Thursday said that the issue related to the wrong depiction of the map of Jammu and Kashmir and Ladakh by the World Health Organisation (WHO) has been raised strongly at the highest level.

Minister of State for External Affairs Vellamvelly Muraleedharan in response to questions raised including whether a map of India on the website of World Health Organization (WHO) is depicting the Union Territories of Jammu & Kashmir and Ladakh in a totally different colour;  if so, the details thereof; whether Government of India has lodged any protest with WHO in this regard; and if so, the steps taken by Government to ensure that such incidents may not recur in future?

In a written reply filed by the MoS, External Affairs, Muraleedharan, as per news agency, said that the issue of the wrong depiction of the map of India on the World Health Organization (WHO) website has been raised strongly with WHO including at the highest level.

The minister informed that in response, the WHO has informed the Permanent Mission of India in Geneva that they have put a disclaimer on the portal.

The response, Minister said that “The designations employed and the presentation of these materials do not imply the expression of any opinion whatsoever on the part of WHO concerning the legal status of any country, territory or area or of its authorities, or concerning the delimitation of its frontiers or boundaries.”

“Dotted and dashed lines on maps represent approximate border lines for which there may not yet be full agreement”, the minister said in a written reply.

The MoS External Affairs said that “Nevertheless, Government of India’s position on the right depiction of its boundaries has been unambiguously reiterated.”

It may be recalled that earlier in a color-coded map of countries, based on the latest pandemic numbers, the World Health Organisation had depicted Union Territories – Jammu and Kashmir and Ladakh as separate from the India.

The Dispatch is present across a number of social media platforms. Subscribe to our YouTube channel for exciting videos; join us on Facebook, Intagram and Twitter for quick updates and discussions. We are also available on the Telegram. Follow us on Pinterest for thousands of pictures and graphics. We care to respond to text messages on WhatsApp at 8082480136 [No calls accepted]. To contribute an article or pitch a story idea, write to us at [email protected]spatch.in |Click to know more about The Dispatch, our standards and policies