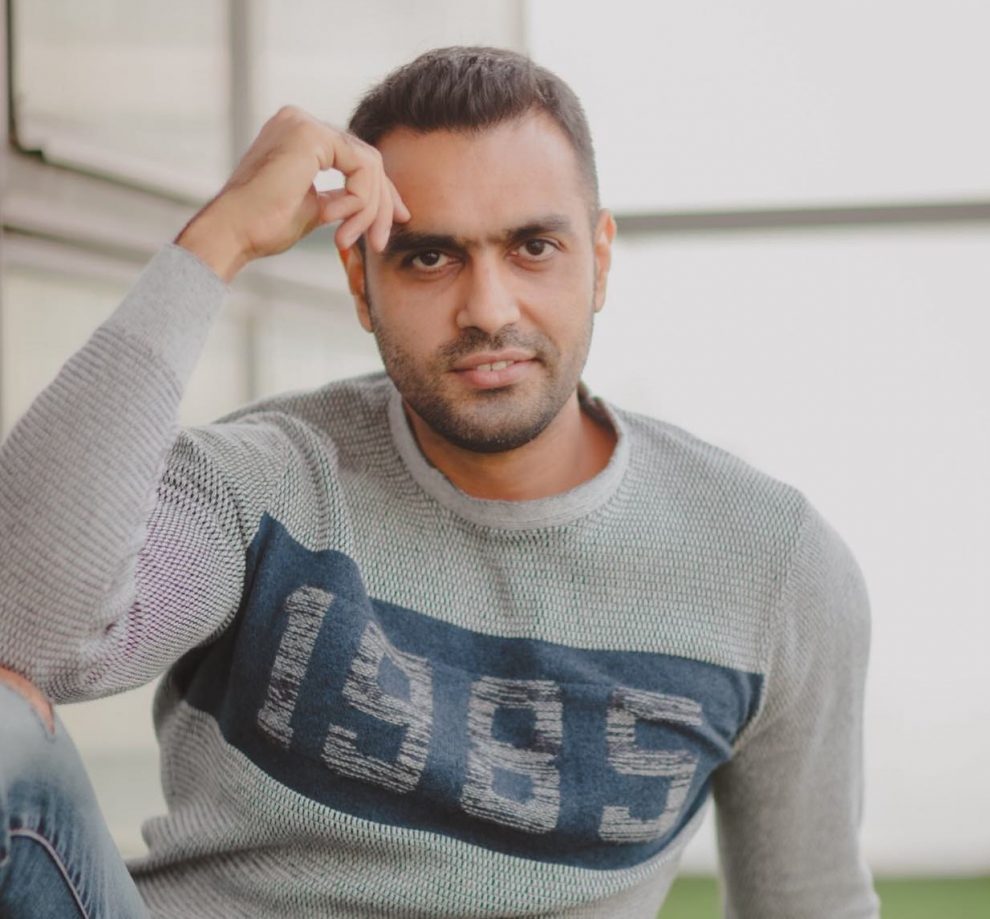 ‘Hiii Abhimanyuuu!’ Maaya sang in delight as soon as the person she had been waiting for so eagerly walked into the reception. ‘It’s such a pleasure to have you here in our office today,’ she added with a bright, welcoming smile.

‘Thank you!’ Abhimanyu said, extending his hand and adding, ‘I am so sorry for making you guys wait.’

‘Oh, don’t worry about that,’ Maaya said, intentionally ignoring the offered handshake and grabbing his shoulders instead. She went for a cheek-to-cheek hug. Abhimanyu hadn’t anticipated that and stiffened slightly, while she inhaled deeply, breathing in the scent of his musk cologne.

‘Traffic?’ she asked as she finally pulled back.

‘We should have sent him my car, Maaya!’

On hearing the confident, booming voice, Maaya turned around, a smile on her face.

Peter D’Souza, the CEO of PaperInk, had walked into the reception area too, just in time to welcome the leading romance writer in the country to their office.

‘Oh yes! I am so sorry! That should have occurred to me!’ Maaya said to Abhimanyu, briefly shutting her eyes and tapping her head with her knuckles in an exaggerated gesture of regret.

‘Oh, there was absolutely no need for that,’ Abhimanyu said as he turned to shake Peter’s hand. Before the door closed behind Peter, Abhimanyu got a peek at the office space stretching behind them.

‘Oh boy!’ He whistled softly. He was impressed despite himself.

Peter turned to look at the space too, aware that it had caught Abhimanyu’s eye. ‘How do you like it?’ he asked.

After a beat, Abhimanyu summarized his thoughts in two words. ‘Very … retro!’

Peter’s chest swelled with pride. ‘It’s all been done by this wonderful lady right here,’ he acknowledged, putting one hand on Maaya’s shoulder. Abhimanyu noticed how Maaya reciprocated by placing her own hand over Peter’s.

‘Only after he approved it,’ Maaya said.

Abhimanyu smiled to himself at this show of mutual appreciation.

‘Oh! I approve a dozen things every day. Not everything turns into gold.’

The CEO gestured to both of them to follow him through the doors into PaperInk’s office space. ‘Come on! Let’s take you inside. It’s time to begin!’

On the way, while Peter tried to engage Abhimanyu in casual chit-chat, the latter’s eyes were busy scanning the length and breadth of the office. It was one hell of a creative space.

As the trio approached the conference room, the team inside watched through the glass walls and got up from their chairs to welcome the author.

Outside, Abhimanyu balked at the nameplate on the door. ‘What on earth …’ he said, his eyes widening in surprise.

‘Before you get the wrong idea, let me tell you something,’ Peter began. ‘You see, we have named our meeting rooms after the genres we publish.’

‘Aah!’ Abhimanyu sighed in relief. The words ‘Romance Room’ had given him a moment’s pause.

‘So, on your right, next to this is Thriller Room. Then there’s Mythology Room, and so on,’ Peter finished with a smile.

‘And it would be blasphemy to take the country’s leading romance writer to any other room,’ Maaya said, pushing the door open for him.

‘Boys and girls, may I present to you, the king of romance in India!’ she announced as she walked in after him.

There was a gentle smile on his lips and a twinkle in his eyes as he looked at everyone across the table. Any other author, perhaps, would have felt a bit embarrassed at such an extensive welcome or, at the very least, would have faked embarrassment in return. But Abhimanyu was a different breed. He owned and savoured the adulation; looked right into the eyes of the person praising him. It was as if it gave him a kind of high.

He was seasoned at this, anyway. Years of interacting with his fandom, which primarily comprised young women, had instilled confidence in him. These women, while reading his books, would imagine themselves as the leading lady of his stories. Their imagination wouldn’t just stop there but go even further, visualizing Abhimanyu himself as the male protagonist they were falling for. Such was his spell on them. No wonder he was called the king of romance in the world of Indian writing.

Abhimanyu waited for everyone to settle down and then, in his signature style, briefly closed his eyes and spread his hands, as if embracing the room.

Meanwhile, Maaya noticed the empty chair. A fresh notebook and a pen were kept on the table in front of it.

‘Thank you, everyone,’ Abhimanyu said softly and simply, a touch of humility in his voice as he accepted their compliments. Then, nodding once more with a smile, he took his chair, which was right across from the screen on which the now-functioning overhead projector flashed the words ‘PaperInk welcomes Abhimanyu Razdan!’ in big, colourful letters.

While Abhimanyu’s attention was on the screen, Maaya whispered to Nakul, the design head who was sitting next to her, ‘Where the hell is she?’ She looked pointedly at the empty chair across the table.

Nakul pursed his lips, raised his eyebrows and shrugged to show that he had no clue.

Maaya was pissed, but she didn’t let her face reveal that. She had more important tasks at hand.

Excerpted with permission from Write Me A Love Story, Ravinder Singh, HarperCollins India. Read more about the book here and buy it here.

Join The Dispatch Whatsapp Group to stay updated
The Dispatch is present across a number of social media platforms. Subscribe to our YouTube channel for exciting videos; join us on Facebook, Intagram and Twitter for quick updates and discussions. We are also available on the Telegram. Follow us on Pinterest for thousands of pictures and graphics. We care to respond to text messages on WhatsApp at 8082480136 [No calls accepted]. To contribute an article or pitch a story idea, write to us at [email protected] |Click to know more about The Dispatch, our standards and policies
TagsContemporary Romance HarperCollins India Ravinder Singh Write Me A Love Story

On eve of his govt’s anniversary, PM Modi announces benefits for children orphaned by Covid
MHA seeks applications for citizenship from non-Muslim refugees from Afghan, Pak, B’desh in 13 districts
Comment