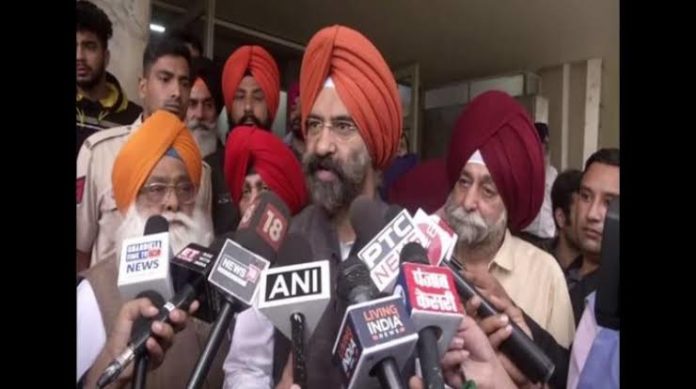 Shiromani Akali Dal (SAD) leader Manjinder Singh Sira on Thursday slammed Congress leader Sidhu Navjot Singh Sidhu after the latter sought permission to attend the inaugural ceremony of Kartarpur Corridor on the invitation of Pakistan.
“Navjot Singh Sidhu has his own thinking. Dr Manmohan who is a Sikh said that he will go there from India’s side. Had Pakistan invited us, we would definitely go there but from India’s side. We would not go from Pakistan’s side because we have to care of our religion and the country’s dignity,” Sirsa told reporters when asked about Pakistan giving visa to Sidhu. The SAD leader also hit out at Pakistan after the country made passport mandatory to use the Kartarpur Corridor, which will be inaugurated this week
“Pakistan is not clearing its stand. Earlier it had said that there would be no need of a passport. In Pakistan, there is no clarity whose order will be followed whether it is Imran Khan or Pakistan Army chief, the latter has a different aim. We regret that a peaceful environment is being dragged into the controversy. We request that Pakistan should offer us the convenience to help devotee visiting the Gurudwara on the 550th birth anniversary of Guru Nanak Dev ji,” he said.
Pakistan Prime Minister Imran Khan had earlier sent a formal invitation to Sidhu to attend the inaugural ceremony of the Kartarpur Corridor in Pakistan.
It may be noted that Pakistan Foreign Ministry spokesperson Dr Mohammad Faisal has said that the country will issue a visa to Sidhu. While Sidhu can cross over to the Pakistani side, he would still have to seek political clearance to attend the Kartarpur ceremony, Dawn reported.
Earlier in the day, Sidhu wrote a letter to External Affairs Minister S Jaishankar requesting to at least reply to his letters seeking permission to visit Gurdwara Kartarpur Sahib in Pakistan. He had written a letter to Punjab Chief Minister Captain Amarinder Singh as well.
The Kartarpur Corridor will connect Dera Baba Nanak shrine in Punjab’s Gurdaspur district with Kartarpur Sahib Gurdwara in Pakistan.
Sidhu, who had earlier attended the ground-breaking ceremony of the Kartarpur corridor, has not been included in a Congress delegation, which will be visiting the gurdwara on November 9.
Navjot Singh Sidhu’s visit to Pakistan in 2018 had drawn criticism from various quarters in India after he hugged the Pakistani Army Chief General Qamar Javed Bajwa at the swearing-in ceremony of Imran Khan.
Prime Minister Narendra Modi will inaugurate the corridor from the Indian side while Imran Khan will open the route on the other side.
India and Pakistan had on October 24 signed an agreement on the modalities for operationalising Kartarpur Sahib Corridor, paving the way for its inauguration ahead of the 550th birth anniversary of the Sikh faith founder Guru Nanak Dev.