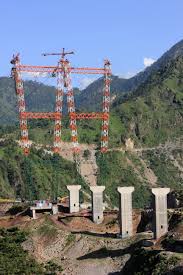 Udhampur-Baramulla rail project to be completed by Dec 2022: Railway Ministry

Srinagar, Mar 05: The world’s highest railway bridge on Chenab river in the Jammu division is all set to be ready this year.

Officials said that the Chenab bridge is being built in the deep gorge and the main arch of the bridge has a length of 476 metres which is the largest arch in India.

They said that once this arch will be complete, work will be started on track laying beside the viaduct.

The bridge is built at a height of 359 metres above the river bed and is said to be around 30 metres taller than the Eiffel Tower. The length of the bridge is one kilometre and 315 metres.

Sources said that due to inclement weather and challenging terrains bridge has missed several deadlines so far.

They said that the bridge will have stations at both ends and it has been built in seismic zone IV besides that it has been designed to be a blast proof.

They added that this bridge will have a design speed of around 100 kilometres per hours with a lifespan of 120 years.

The bridge will include a 14m-wide dual carriageway and a 1.2m wide central verge.

The bridge will include 17 spans with a 469 m main arch across the Chenab river and viaducts on either side and according to officials Steel was chosen to construct the bridge as it will be more economical and able to resist temperatures of – 20°C and wind speeds of above 200 Km/h.

Officials said that in view of site conditions, the bridge has been divided into three parts which include a 120 m long approach viaduct on Reasi side, the main bridge of 473 m cable-stayed portion and a central embankment of 94 m.

They said that this bridge stands at a height of 331 m above the river bed.

Officials said that the Chenab bridge will be completed in ongoing year while as cable-stayed rail bridge is expected to get complete next year.

People from Jammu and Kashmir are eagerly waiting for the completion of this project so that it can provide all weather connectivity to Kashmir and parts of Jammu division to rest of the World.

The Jammu-Udhampur-Srinagar-Baramulla rail line project was undertaken by the government of India in the year 2003. Jammu to Udhampur section was completed and opened in 2005.

“The Udhampur-Baramulla rail project will be completed by December 2022 besides that all northern state capitals except Shillong to be connected by March 2023,” Union Railway Ministry had said recently.