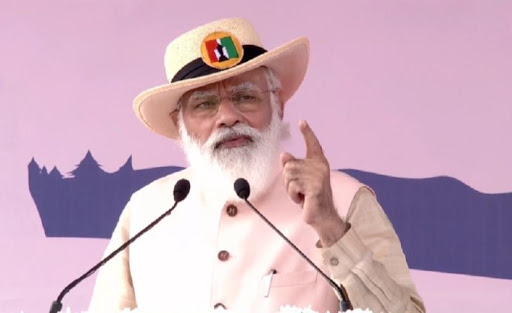 The Prime Minister further stated that 130 crore Indians together honoured the COVID19 warriors in their fight against this pandemic.
“The way the country has proved its collective potential during this time is unprecedented,” he added.
Speaking about boosting tourism here, PM Modi said, “A seaplane service from Sardar Sarovar to Sabarmati riverfront will be started today. This will help boost tourism in this area. All these efforts are going to increase tourism in this area too. Tribal people are getting equal chances of employment. I congratulate the Government of Gujarat and the people of the state for these achievements.”
“Many new sites like Jungle Safari Park, Ekta Mall, Children’s Nutrition Park, Arogya Van have been launched here in Kevadia. In the coming time, on the banks of ‘Maa Narmada’, not only India but this place is going to make its place on the tourism map of the whole world,” he added.

The Prime Minister further said only a self-sufficient country can be confident of its progress as well as its security.
“Therefore, today the country is moving towards becoming self-sufficient in the field of defense as well. Not only this, India’s views and attitudes have also changed on the borders,” said PM Modi.
“Today those eyeing the land of India are getting a befitting reply. Today’s India is building hundreds of kilometers of roads, dozens of bridges, many tunnels on the borders. Today’s India is fully prepared to protect its sovereignty and honor,” he added.
Amidst these efforts, there are many challenges which India, and the whole world, are facing today, PM Modi stated.
Prime Minister Narendra witnessed the ‘Rashtriya Ekta Diwas’ parade on the birth anniversary of Sardar Vallabhbhai Patel in Kevadia, Gujarat.

Earlier today, the Prime Minister paid tribute to Sardar Patel at the Statue of Unity in Kevadia, Gujarat.
PM Modi is on a two-day visit to Gujarat, the first time since the COVID-19 outbreak and the subsequent lockdown in March, to mark Rashtriya Ekta Diwas, celebrating the birth anniversary of Sardar Patel.
Sardar Patel, who is credited with uniting all 562 princely states of the pre-independent country to build the Republic of India, passed away on December 15, 1950.