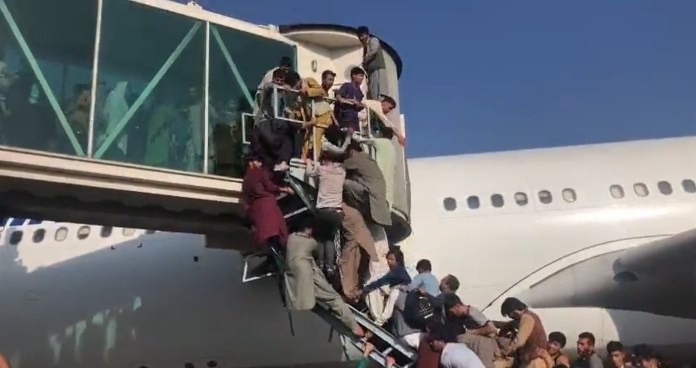 The World leaders have expressed dismay and concern over the chaotic scenes in the Afghan capital Kabul, with the Taliban now effectively taking control of the country.

German Chancellor Angela Merkel warned that Afghans fleeing from the Taliban to neighbouring countries could make their way to Europe, in a repeat of the 2015 migrant crisis, if they don’t get sufficient humanitarian assistance. She said, Germany may need to evacuate as many as 10,000 people from Afghanistan.

Canadian Prime Minister Justin Trudeau has said, the country is prepared to continue sending military transports back to Kabul to carry on evacuating desperate Afghans in the coming weeks but called the situation extremely fluid and exceedingly dangerous.

French President Emmanuel Macron has said that Afghanistan must not become a safe haven for terrorists again. He said, it’s France’s duty to protect those who helped them including interpreters, drivers, cooks and many others. He also expressed his concern and said, they will set up an initiative, with Germany and other European countries, to build a robust, coordinated and united response without delay, which will involve the fight against irregular flows.

British Prime Minister Boris Johnson called the situation extremely difficult and said it is very important the West collectively should work together as no one wants Afghanistan to become a breeding ground for terror.

Prime Minister of Italy Mario Draghi vowed all Afghan citizens who assisted Italy’s mission in the country would be protected, as the first plane carrying Italian diplomats and their Afghan assistants arrived in Rome from Kabul yesterday.

On the other hand, Russia has decided to keep its embassy in Kabul open. About 100 employees will be moved, to avoid having too much of a presence. According to the Russian Foreign Ministry, Russian Ambassador Dmitriy Zhirnov is due to meet with the Taliban in Kabul today.