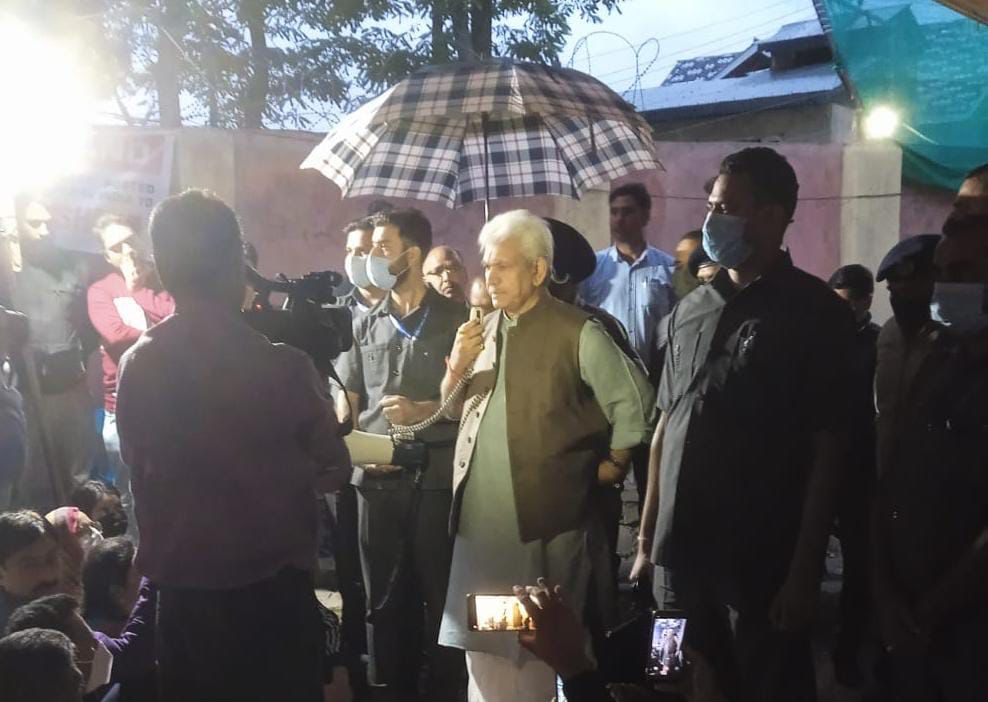 BUDGAM: Lieutenant Governor, Manoj Sinha on Monday night reached out to protesting Kashmiri Pandits (KPs) at Sheikhpora, Budgam and stated that in the past few years security forces were having upper hand ‘but’ even shadows are suspects in Kashmir.

He, however, was quick that the roots of militancy have been strong in the Valley and besides that the eco-system that provided oxygen to it remained ticking but his government is committed to root-out militancy from Kashmir soil.

Addressing agitating Kashmiri Pandits at Sheikhpora area of Central Kashmir’s Budgam district, Sinha said security forces in Kashmir have been having an upper hand in the Valley. “But we can’t even trust shadows as for us, even shadows are suspects…,” he said. “Who knows someone among you may be informing others about what I am telling you…”

He said the administration was fully aware of the sufferings of Kashmiri Pandits (KPs) and is committed to resolve all issues on fast-track basis. “Enough blood has flown in Kashmir. Roots of militancy have remained stronger here in Jammu and Kashmir and there was a time when even the case was not being registered,” he said, adding that “his government is committed to end militancy from Kashmir for everlasting peace.”

The LG said that it was a fact that no one can compensate for the death of any person. However, the government is taking measures to provide job compensation to the NoK’s of Rahul Bhat,” said LG, who was accompanied by Divisional Commissioner Kashmir P K Pole and Inspector General of Police (IGP) Kashmir Vijay Kumar.

He further added that from the last over a year, the security forces have had the upper hand. “Despite that, some incidents have taken place. There are informers everywhere. Nobody can even identify them. However, I can’t assure that no such incident will take place, those who kill people with guns are not our only targets, but all those who are running this ecosystem. We will not stay calm until this ecosystem is put to an end. Everybody knows what has happened, but can’t tolerate it anymore,” he said.

Sinha further said that the attempts by some elements have been made since long and you (Kashmiri Pandits) are knowledgeable about it. “I belong to an outside State and you are well aware about the situation,” he told the agitating KPs and urged them not to fall prey to some hands who are playing politics over the killing of Rahul Bhat. He assured KPs that all their issues will be resolved including providing safe and secure accommodation.

“One officer at my office has been assigned the job of monitoring the fulfillment of your all demands. Besides that Divisional Commissioner is also working on all your demands,” he said and urged the KPs to have faith in the system.

“The homes are being constructed while at some places lands are being made available and DPR in some cases are in final stage,” he assured the KPs while paying tributes to Rahul Bhat, a Revenue official, who was killed at Tehsil Office Chadoora almost ten days back—(KNO)

Except today, no forecast for ‘significant’ weather in next 4 days in J&K: MeT
Sourabh chairs Kundal’s session on foreign policy at J&K IMPARD
Comment