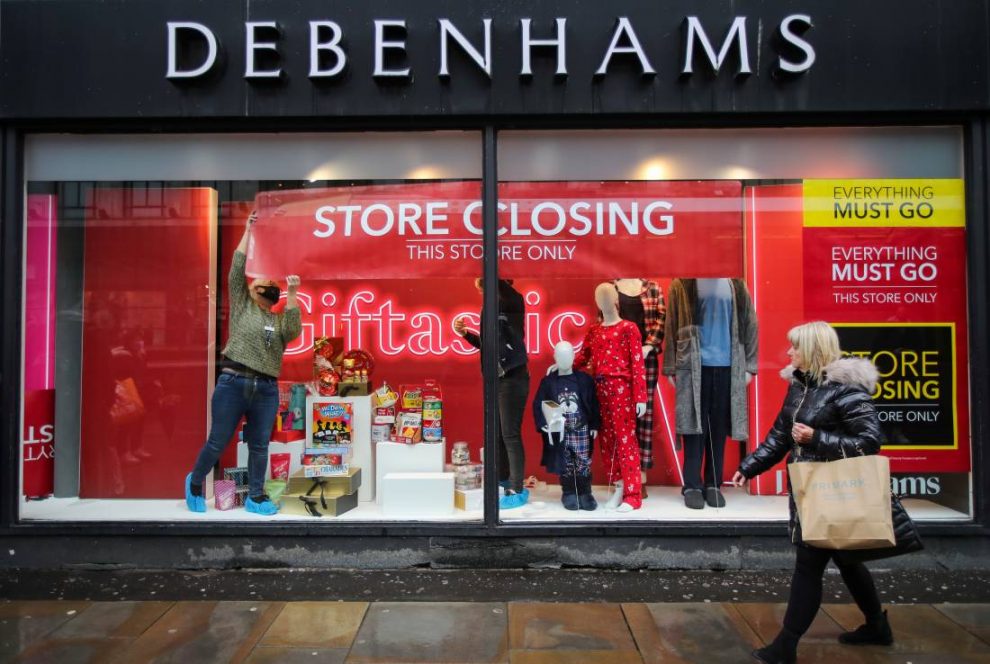 LONDON: As Britain’s Arcadia and Debenhams become the latest retail empires to collapse under COVID-19, unions and charities say women will bear the brunt of mass job losses on the high street.

Debenhams said this week it would shut shop after 242 years of trading, putting 12,000 jobs at risk in the country’s second major corporate failure in as many days.

It came after Philip Green’s Arcadia fashion group, with Topshop, Topman and Dorothy Perkins among its brands, collapsed into administration on Monday, threatening 13,000 jobs.

Women are most likely to lose their jobs since they make up nearly 60% of the British retail sector, which employs about 2.8 million people, according to the Work Foundation think tank.

“Women workers are being hit hard by high street job losses. We need urgent and targeted action to save livelihoods in badly-hit industries – like retail – before it’s too late,” said Frances O’Grady, General Secretary at the Trades Union Congress.

About 80% of people working for Arcadia and Debenhams are women, said the Union of Shop Distributive & Allied Workers, which represents retail workers.

Most Arcadia staff – be it back office or shopfloor – were female and under 35, according to the company’s website.

An estimated 1.5 million young women have lost their income in the pandemic, according to the charity Young Women’s Trust.

Add to that the pressure of caring for the house bound, be it children out of school or vulnerable relatives, and experts say many women face an added strain in the global health crisis.

“It’s just devastating. There needs to be some kind of hope for these women. Some kind of opportunity to re-train and to get back into new jobs,” said Siobhan Endean, women’s officer at Unite the Union, the largest trade union in the UK and Ireland.

COVID-19 has disproportionately hit women’s careers, with studies showing they are more likely to earn less and be in jobs that are harder hit by lockdown, all while picking up the lion’s share of unpaid jobs at home.

Monthly wages fell or stagnated in many countries in the first six months of 2020, with the pandemic hitting lower-paid workers and women hardest, the International Labour Organization (ILO) said on Wednesday.

For women like Suzanne Sherry, who spent 24 years working at Debenhams in Ireland, she was informed via an automated email in April that she and her colleagues no longer had a job.

To make matters worse, Sherry was told she would not receive a redundancy payout despite being an employee since 1996 when the retailer opened its flagship store in the capital Dublin.

“I was extremely upset and shocked. Angry too, as I was a conscientious employee with five sick days in 24 years. Never late,” she told the Thomson Reuters Foundation.

“Devastated is an understatement, we should have been receiving this information on a Zoom call or the very least a phone call. The lack of care and empathy for their loyal workers was incredible,” the 48-year-old said.

RetailTRUST, a charity that supports retail workers through training, financial aid and free counselling, said it saw a 400% increase in requests for help this year, most from women.

“The huge amount of job losses is devastating for so many people, but it is weighed heavily against women,” said chief executive Chris Brook-Carter.

Sherry said she and her former Debenhams colleagues have protested day and night in pursuit of a redundancy payment.

“Doing right by us predominately female workers is about more than respect. We were discarded by Debenhams without a backward glance,” she said.

“There are more women in the retail and service sector than any other so this is a significant blow for us at this time.”