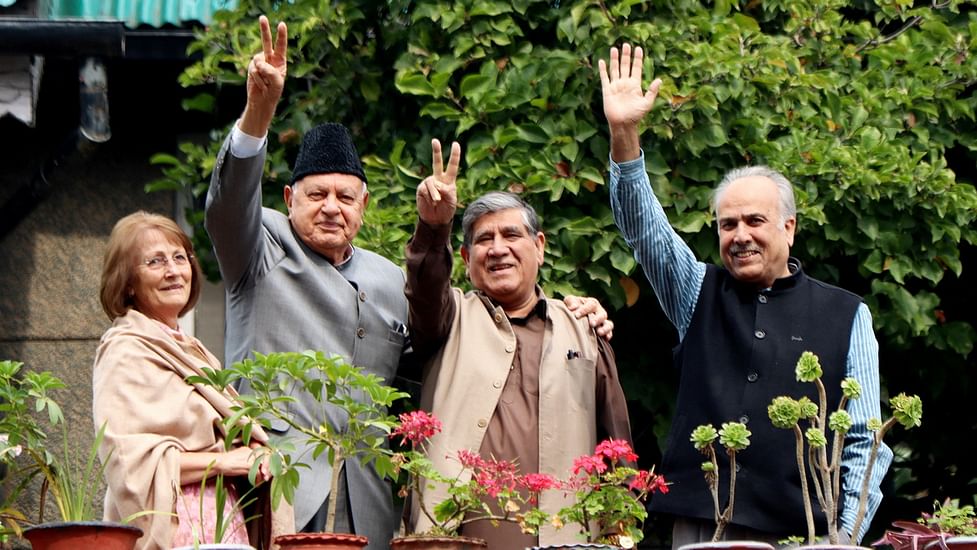 The Dispatch Staff
Add Comment
The three Lok Sabha members, who are associate members of the Commission, in their written objections filed on Monday said, the draft proposal made in working paper 2-6 proposing demarcation of the assembly and parliamentary constituencies be withdrawn without acting upon the proposals in any manner or proceeding ahead in the matter.

Srinagar: National Conference has asked the Jammu and Kashmir Delimitation Commission to withdraw the draft proposal for demarcation of assembly constituencies and also stop further proceedings of the Commission till the final adjudication of pleas challenging validity of revocation of Article 370 and reorganisation of the erstwhile state into two union territories.
The three Lok Sabha members, who are associate members of the Commission, in their written objections filed on Monday said, the draft proposal made in working paper 2-6 proposing demarcation of the assembly and parliamentary constituencies be withdrawn without acting upon the proposals in any manner or proceeding ahead in the matter.
The Commission must stop the exercise forthwith pending final adjudication and disposal of the batch of writ petition questioning Vires and constitutional validity of Jammu and Kashmir Reorganisation Act 2019, NC leaders Farooq Abdullah, Hasnain Masoodi and Mohammad Akbar Lone said.
Making public their response to the proposals, they said a bare look at the working papers would reveal that the population as the first and foremost criteria of delimiting the constituencies has not been given the prominence it deserves.
“The deviation in population ranges from 56,077 more than average of 1,36,304 in case of 41-Dooru to 85,025 less than average in case of 50-Padder. There are seven Assembly segments with less than 100,000 population (Paddar, Shri Mata Vaishno Devi, Bani Mughal Madaan, Basohli, Ramgarh and Kishtwar) in Jammu Province while number of such constituencies is only three (Gurez, Karnah and Kunzer),” they said.
The NC leaders pointed out that there were 18 Assembly segments with population of more 1,50,000 in Kashmir province while number of such Assembly segments was seven in case of Jammu province.
“Twenty-four constituencies in Kashmir province have more than an average population of 1,36,304 while population of only eight constituencies in Jammu province exceeds the average population of a constituency worked out by the Commission. The population of Dooru almost equals population of three constituencies Paddar, Shri Mata Vaishno Devi (SMVD) and Bani constituencies of Jammu,” they added.
The leaders said as per the draft proposal, people of Dooru will have one member in Assembly while an almost equal population from Paddar, Bani and SMVD constituencies shall have three members in the Assembly.
“The Working Papers 2-6 script a storey of disempowerment and disenfranchisement of Kashmir and far flung unattended areas of Jammu,” they said.
The NC leaders said even when a district is taken as a unit for delimitation, Anantnag, Budgam, Kupwara and Srinagar districts — having regard to the population, and criteria of 10 percent deviation from average, fixed by the Commission in Paper -1 — deserve to be allotted an extra Assembly segment each out of the seven increased seat while Rajouri, Poonch and Doda in Jammu province are to get one each.
Referring to section 60 of the Jammu and Kashmir Reorganisation Act 2019, the leaders pointed out that it says all constituencies shall, as far as practicable, geographically compact areas, and in delimiting them, regard shall be had to physical features, existing boundaries of administrative unit, facilities of communication and convenience to the public.
“In most of cases geographical compactness, facilities of communication and convenience to the public spelt out in Section 60 have not attracted any consideration. The constituencies have been demarcated, areas joined and areas annexed without least regard for these factors and for reasons other than permissible under settled norms,” they said.
They cited the example of Rajouri assembly segment, Sohna PC, Doongi PC and Bagla PC situated at the tail-end of 85-Rajouri have been annexed with Thana Mandi segment.
“The inhabitants of these areas have to cross Rajouri to reach Thana Mandhi. All the fundamental legal parameters have been grossly violated with least consideration of the hardship the people may have to suffer,” they said.
They cited several other similar instances.
“What can be more shocking example of unrealistic, illogical and irrational demarcation of a Parliamentary Constituency than that of 3-Anantnag Constituency.
“The Commission has joined Anantnag, Kulgam and Zainapora from Shopian District with Poonch and Rajouri without any regard for the terrain, geography, connectivity, accessibility, and overall convenience,” the leaders said.
They said the Commission has not taken into account that Poonch-Rajouri area and Anantnag-Kulgam-Zainpora are separated by Pir Panchal Range and the area are inaccessible for half of the year due to heavy snowfall.
“The draft proposal makes no sense…The only result would be huge hardship to the people of Poonch, Rajouri and also far flung areas of south Kashmir. Redrawing of boundaries of Srinagar and Baramulla depicts similar indifference to the guiding principles of compactness, contiguity and connectivity,” they said.
The leaders said the proposal has “shockingly” obliterated a number of constituencies of historical importance.
“To name a few Habakadal, Amirakadal, Zadibal, Shangus, Kokernag, Sangrama, Gulmarg, Hom Shali Bugh, Inderwal, Gandhi Nagar are made to disappear and completely obliterated unmindful of their emotional, psychological value and importance,” they said.
The leaders said it appears that the “Working Paper 2-6” is being used as a device to deface and obliterate history and make an assault on culture.
“Non application of mind is writ large on the Working Paper 2-6 as must be clear from the submissions made above and the proposals there deserve to be withdrawn and whenever permissible under the Constitution a fresh look given to it after wider consultation,” it said.