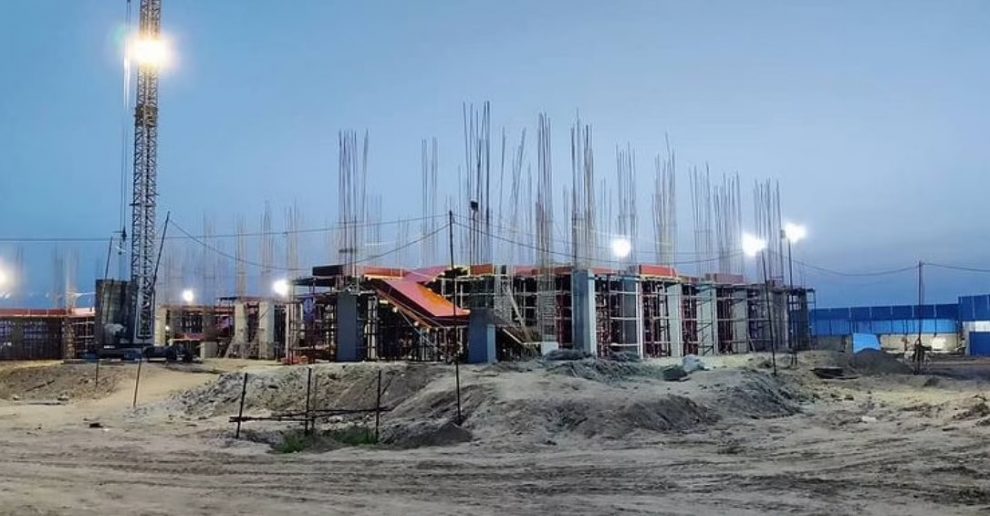 The Dispatch Staff
Add Comment
The construction work of AIIMS, Jammu has gathered pace after the removal of most bottlenecks hindering its progress. According to the statistics, 42 per cent of work regarding the construction of the prestigious project at Vijaypur in the Samba district of the Jammu region has finished.

Jammu: After union capital-New Delhi, Jammu will be getting second-largest All India Institute of Medical Sciences (AIIMS) in the country with a 2200 bed capacity.

The AIIMS campus is being established on an area of 226.84 acres of land in Vijaypur area comprising all advance medical facilities which will shape up the public health medical infrastructure.

The construction work of AIIMS, Jammu has gathered pace after the removal of most bottlenecks hindering its progress. According to the statistics, 42 per cent of work regarding the construction of the prestigious project at Vijaypur in the Samba district of the Jammu region has finished.

AIIMS Jammu will help in generating employment and boost the economy of the region. At one side AIIMS is connected with the Jammu-Pathankot national highway, while on the other side it is connected with Jammu city.

The construction of AIIMS is being carried out keeping in mind that area falls in seismic 5 zone, which will protect the institute from even severe intensity earthquake.

The work on the prestigious project in going at fast pace and about 40 per cent structure of the first has been completed so far, which is likely to be completed in the current year.

The AIIMS will be having 41 department of various disciplines including 18 super specialty departments. About 3500 posts will be filled under group B and C categories in AIIMS Jammu.

It is expected that about 500 patients will be availing OPD services on daily basis at AIIMS.  For indoor patients, beds are being established in AIIMS. The AIIMS Vijaypur will also be having a 30 bedded Ayush block.

The Out-Patient Department (OPD) services will start immediately at the All India Institute of Medical Sciences (AIIMS), Jammu, and the first batch will move and operate from the premises from June 1 this year.

Presently, the first batch of 50 students of AIIMS Jammu is pursuing its MBBS at AIIMS Rishikesh.

For facilitating staff members and patient attendants, three shopping complexes are also coming up at the AIIMS, Jammu.

The AIIMS Jammu is being built as Satellite Township, keeping in mind the influx of patients coming to the health institution from Jammu, Kashmir, Ladakh and neighbouring Punjab and Himachal Pradesh. Also night shelters are coming up from patients and their attendants.

Under corporate social responsibility (CSR), the Power Grid of India Ltd has given nod for financing a shelter which would cost around 30 odd Crores, which is expected to be completed by June.

The shelter will have a holding capacity of 216 patients and attendants.  Besides night shelters, three shopping complexes are also coming up, which would have cafes, eateries, grocery stores and shops selling fruits and vegetables.

Good Places to Meet Asian Women
How Does Online Dating Do the job? The Best Place to Get a Wife
Comment