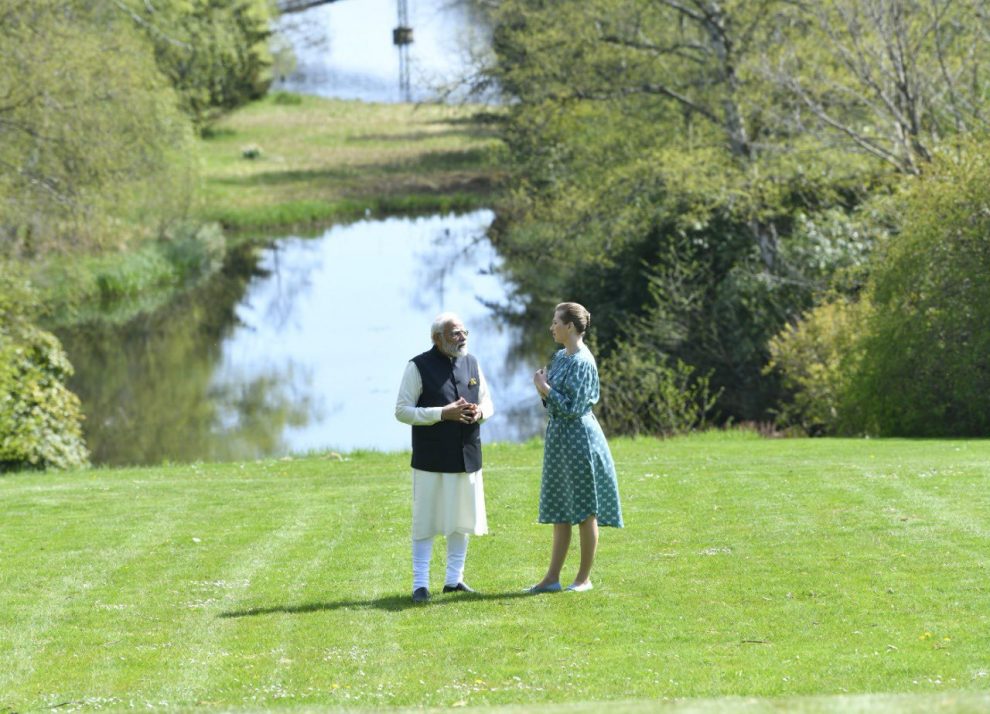 Prime Minister Narendra Modi dashed off to three countries in Europe from 2-4 May 2022. He went to Germany, Denmark and for a stopover in Paris on the way back home. This is his first visit to Europe since the war in Ukraine last month which has engaged almost the entire international leadership on its repercussions on world politics. The point to note is the divergence of reactions to the war: Europe calling Russia out as the aggressor and India remaining neutral. Modi has had to wade through this heavy diplomatic division with Europe.

To recall a slice of history, India has taken a critical posture towards Europe, mainly the construction of European Union. Prime Minister Nehru in 1960s, as the European Union was being shaped up, derided its prospect by calling it a ‘capitalist club’. He may have detected a colonial bent in building of European Economic Community in 1957 under the Treaty of Rome as, at the same time, Nehru along with Tito Nasser was crafting the Non-Aligned Movement (NAM). What happened to NAM and the EEC could be evaluated by contemporary political historians. Suffice to say that NAM disappeared in the sands of history, whereas EEC emerged as a big economic block, transforming into a political entity called European Union.

The misreading of growth of EU in its formative stage by Nehru reflected a serious mismatch between India’s economy and foreign policy. Since the foreign policy was security driven, the focus of our bilateral relations was on Pakistan and Russia. Pakistan has been the adversary and Russia an ally for defence supplies. Europe was overlooked although about 60 per cent of our trade deficit was accounted for by EU. India’s economy suffered from lack of investment, technology and market. Curiously, the same trend continues even today as is seen in India’s stand on Ukrainian war. New Delhi is not able to name Russia.

Although Modi has been critical of fault lines in India’s foreign policy created by Nehru, he has not been able to correct these. This has been experienced in New Delhi’s relations with Beijing, with Moscow and in unresolved tensions with Islamabad. Even under globalisation when growth in economy became a measure of country’s strength, India lagged behind despite its demographic dividend and the size of the market. Will it change now, in regard to Europe, as Modi has acknowledged the European countries as “India’s important partners in her quest for peace and prosperity?”

On the first leg of the tour, Modi landed in Germany to co-chair the 6th India-Germany Inter-Governmental Consultation (IGC), along with German Chancellor Olaf Scholz, from the Progressive Social Democratic Party. Notably, IGC is a unique biennial format which India conducts only with Germany. India and Germany have had a long historic relation. India was one among a few countries to extend diplomatic recognition to Federal Republic of Germany after the Second World War. Berlin and New Delhi have been strategic partners since 2000. Germany became economical strong and the leader of the EU attracting several economic and trade partners, including India. Currently, Germany holds the G-7 presidency. Modi’s diplomacy will show if he gets India invited to the G-7 outreach summit in June.

Modi and Scholz would have jointly thought about dealing with Russia. Germany is trying to reduce its energy dependence on Moscow. Likewise, New Delhi should strive innovatively to reduce its dependence on Moscow for its defence supplies. Both countries in their respective ways should try to extricate from Russian bear-hug. Russian gas pipelines were coming through Ukraine to Germany carrying major energy supply. If Berlin could forgo that supply due to its solidarity with NATO allies, New Delhi could do so in the defence procurement.

The next stop for Modi was Copenhagen. He had twin purposes in visiting Denmark – to consolidate bilateral relations with the country and to attend the second India-Nordic summit in Copenhagen. On bilateralism, Copenhagen and New Delhi have become green strategic partners since September 2020. New Delhi could explore new elements of partnership with resourceful Copenhagen in the field of skill development, shipping, agro-technology, and mobility. These are the prospective areas indicated by Indian Foreign Secretary Kwatra.

Modi will look up for four Nordic leaders – Prime Ministers of Sweden, Norway, Finland and Iceland in addition to the host, Prime Minister of Denmark Mette Frederiksen. In particular, Modi will nudge these leaders for India-Nordic cooperation in Arctic. Significantly, Sweden and Finland possible membership of NATO and a threat of strong retaliation with nuclear bombs may figure in the deliberations with Modi.

There is also a brief stopover in Paris for Modi to congratulate President Emmanuel Macron, who won a hard and bitterly fought presidential elections on 25th of April. Modi and Macron have been active around the Russia-Ukraine war, Paris and New Delhi have a strategic partnership. Both the leaders might explore the next phase of this important partnership. France is holding the EU presidency this year, hence Macron’s role in European politics, including Ukraine will be closely watched.

France is being regarded by observers as new Russia for India for its continued and solid support in international arena. On trade and economy, both the countries share a close relationship – in defence and security cooperation, robust economic partnership, space cooperation and civil and nuclear cooperation. The new areas for cooperation are being explored. What is important to watch is their exchange of notes on the war and if they could reach a point of convergence.

Prime Minister Modi’s three-day visit to Europe, to three countries mentioned above was hectic and packed. He had 25 engagements with eight world leaders, 50 business honchos and 1600 strong Indian Diaspora in Germany which included students, research scholars, professionals and businessmen. Modi, as usual, used the opportunity to have a dig at his opponents back home and exulted in India’s economic achievements. He said, “there were 200-400 start-ups in 2014, now India hosts 68000 start-ups and dozens of unicorns…. Some of whom have already become deca-corns with 10-billion dollars valuation”.

Prime Minister’s emphatic presentation of India as a secure and grown-up economy was perhaps aimed at enticing the Indian Diaspora to globalise ‘Indian story’. He was also wanting to attract European business into Indian market. He even mentioned Article 370 to boost up the morale of Indian Diaspora on India’s unity, strength and integrity. This is alright for psychological and cultural diplomacy with the Diaspora, which feels usually nostalgic.

In sum, Modi’s visit in these tumultuous times in Europe will bring rich political and economic dividends for India if he managed to correct the perception that India is beholden to Russia and therefore could not take a bold stand even when international political norms are violated. Many observers and supporters of South Block and Prime Minister Modi will endorse India’s position on Ukraine as pragmatic and prudent. Will Europe, which professes openly democracy, human rights and freedom in relation to individuals or countries will be convinced by such logic. Prime Minister Modi’s visit should a prelude to a radical shift in India’s foreign policy. Will it?

Towards fulfilling aspiration of youth in Ladakh