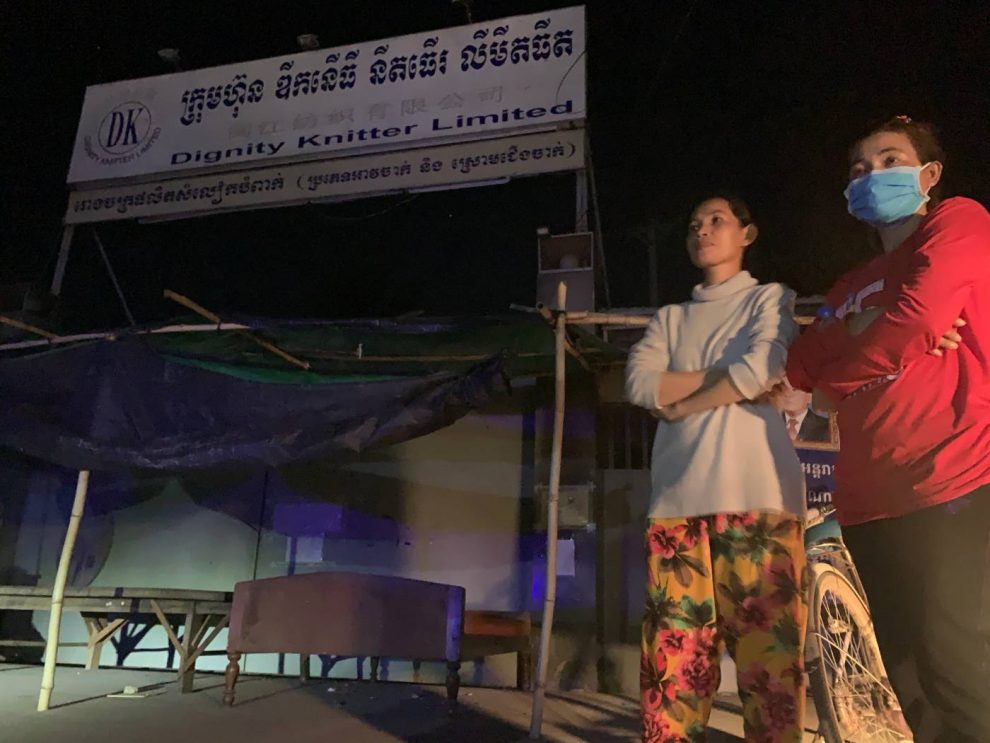 KANDAL PROVINCE, Cambodia: Lon Vanna has been working around the clock for months but she doesn’t sew clothes anymore – she guards the machines in the abandoned garment factory in Cambodia where she once worked.

Vanna believes the sewing machines are her only hope for saving her home and land, which she put up as collateral for a loan to feed herself and her ailing parents after the new coronavirus pandemic shuttered the factory in March.

“Those machines are my money; they are my life,” Vanna said, pledging to hold them hostage until she receives about $2,000 in wages and bonuses owed since bosses shut the factory, some 50km south of the capital, Phnom Penh, unannounced.

“We only know how to sew clothes,” she said, sat among half a dozen former workers who guard the factory around the clock, and in August chased away men sent by the factory owners to retrieve the machines.

“But we see no hope in the industry, only shut downs and sackings, so we can’t give up.”

Some Cambodian exports lost duty-free access to the EU in August as the bloc signalled its discontent over the Southeast Asian country’s crackdown on opposition, civil society and the media.

Hard-won labour rights have also been rolled back this year in the garment industry, workers’ advocates say, as the virus has fuelled ‘union-busting’ at factories and poorer wages and conditions for those still in a job.

Cambodia has rolled out some assistance for laid off garment workers, but workers and advocates say it has been insufficient and difficult to access.

Labour ministry spokesman Heng Suor told the Thomson Reuters Foundation that the process of applying for financial support was “not hard at all … as long as the factory files for suspension properly”.

Across the developing world, millions of workers in garment supply chains were laid off and left unpaid in 2020 as the pandemic pummeled the international fashion industry.

Cambodian workers are owed more than $120 million in unpaid wages for the first three months of the pandemic alone, according to advocacy group Labour Behind the Label, describing it as a “mounting humanitarian crisis.”

Exports to the EU – usually worth around $5.5 billion a year – dipped by almost $1 billion in the first nine months of 2020.

Global brands, including Adidas and Levi Strauss, had urged Cambodia to reform and drop criminal charges against union leaders but Prime Minister Hun Sen, in power for 35 years, said the country would not “bow down” to foreign demands.

“The country’s performance on labour rights has deteriorated so severely that it has become a marketing liability for the country as a producer and increased brands’ reputational risk,” he said.

Opinions are mixed over the industry’s future.

At least 110 factories have shut permanently due to the loss of orders and the fate of scores more remains unknown, said Ken Loo, a representative for factory owners, adding that the situation will become clearer when 2021 membership fees are due.

Loo said Cambodia’s garment industry is well-placed to rebound as exports to the United States have surged in 2020, more than 60 new factories have registered, and Cambodia has far fewer coronavirus cases than other Asian production hubs.

While India has recorded almost 10 million infections, the second highest globally after the United States, and Myanmar more than 100,000 cases, Cambodia has had less than 400 cases and no deaths, a tally by Johns Hopkins University shows.

“Look at the alternatives – Myanmar, for example, where COVID is out of control,” said the Loo, secretary-general at the Garment Manufacturers Association in Cambodia.

“This will be a factor for investors in the future.”

Loo said he was also optimistic about trade with Britain after the completion of its transition out of the EU on Dec. 31, which will bring an end to EU tariffs and allow Cambodia to export to Britain duty-free.

“I don’t say it will make up the entire difference … but I don’t think we are in a worse position,” he said.

But fashion giant H&M, which has about 50 factories in Cambodia, said sourcing in Cambodia had become “problematic” because of increased tariffs, labour rights and environmental concerns, particularly its recent heavy investment in coal.

Meanwhile, for Cambodians who do have work, competition has driven down conditions and unionists continue to be targeted, said Yang Sophorn, president of the Cambodian Alliance of Trade Unions.

“Last month alone, we organised two new local unions in factories and our leaders at both have already been subject to either threats of, or actual, dismissal,” she said.

Cambodia’s garment workers are due to receive a $2 rise in the minimum wage to $192 per month in January – still below the living wage of $588 calculated by the Asia Floor Wage Alliance, a supply chain lobby group.

The women guarding the sewing machines at Vanna’s former factory, each owed a few hundred to a few thousand dollars, said they had little else to do and would not be leaving.

“I’ve sold my motorbike now, so I can’t go anywhere,” Hoeun Toeuth, 38, said from behind a face mask.

“But we still have rice, and we will struggle until the end – this is the life of the worker.”