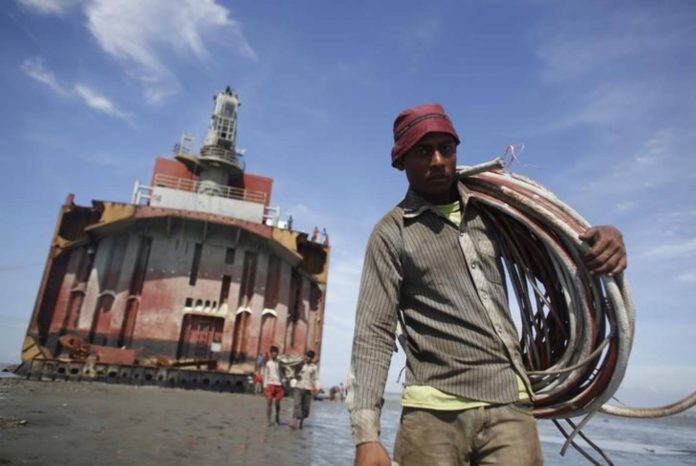 DHAKA: A Bangladeshi woman whose husband died while dismantling an oil tanker at a ship-breaking yard in 2018 can file a negligence claim against a British company involved in the vessel’s sale, London’s High Court ruled this week.

Khalil Mollah, 32, fell to his death while working on a tanker called the EKTA in the port city of Chattogram in southeastern Bangladesh, where scores of end-of-life ships are sent to be scrapped each year.

British lawyers representing his widow, Hamida Begum, took her case to court in April 2019, arguing that Maran (UK) Ltd was responsible for the ship ending up in Bangladesh, where working conditions in ship-breaking yards were known to be dangerous.

Maran was not immediately available to comment on Monday’s High Court judgement, which said Begum had “a real prospect of succeeding in relation to her claim in negligence”.

“The proximate cause of the accident was the deceased’s fall from a height, but on a broader, purposive approach the accident resulted from a chain of events which led to the vessel being grounded at Chattogram,” the court’s judgement read.

The ruling denied an application filed by Maran earlier this year to have Begum’s claim struck out.

The EKTA, which was formerly called the Maran Centaurus, had been owned and managed by companies belonging to the Angelicoussis Shipping Group, which included Maran (UK) Limited, according to details from the judgement.

Rather than deal directly with ship-breakers it has been standard practice for decades for ship-owners to act through brokers or intermediaries, the ruling said.

The Maran Centaurus was sold for demolition in an August 2017 deal worth more than $16 million.

Bangladesh is one of the most popular destinations for breaking end-of-life ships with at least 230 ships out of about 670 broken on its beaches last year, according to NGO Shipbreaking Platform.

Thousands of Bangladeshis depend on the sector for survival, but rights groups have been sounding the alarm about hazardous working conditions in the industry for years.

At least 24 ship-breaking workers were killed last year and another 34 were seriously injured at the scrap yards, the highest toll in almost a decade, according to Bangladeshi non-profit Young Power in Social Action.

Most companies sell ships to scrap dealers, better known as cash buyers, who pay the highest price for ships and are closely linked to beach yards where unsafe working practices are common, Shipbreaking Platform said in a recent report.

Oliver Holland, a partner at the Leigh Day law firm representing Begum, said that trend could change if Maran (UK) is made to accept that it owed Begum’s husband a duty of care.

“Maybe that will go some way to making UK shipping companies think twice about accepting greater financial reward for their end-of-life vessels at the cost of the environment and the lives of South Asian workers,” he said.