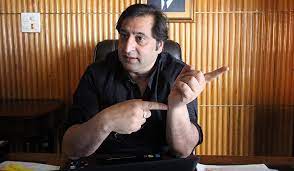 SRINAGAR: A day after NC president Farooq Abdullah, PDP chief Mehbooba Mufti and other leaders of PAGD met Lieutenant Governor Manoj Sinha over the killing of a Kashmiri Pandit, Peoples Conference Chief Sajad Gani Lone on Monday lashed out at them, saying they never met LG to express concern over killings of Kashmiri Muslims in the past three years.

Lone asked PAGD leaders why they did not meet LG to express concern over killing of Kashmiri Muslims in the past three years. “I appreciate PAGD going to meet LG and agitate killing of our KP brother. Didn’t Kashmiri Muslims die in the last 3 years? U never went to meet LG,” Lone tweeted.

Governance reforms must be taken to next level: Dr. Jitendra
3 LeT militants, female associate among 7 arrested in Bandipora: Police
Comment