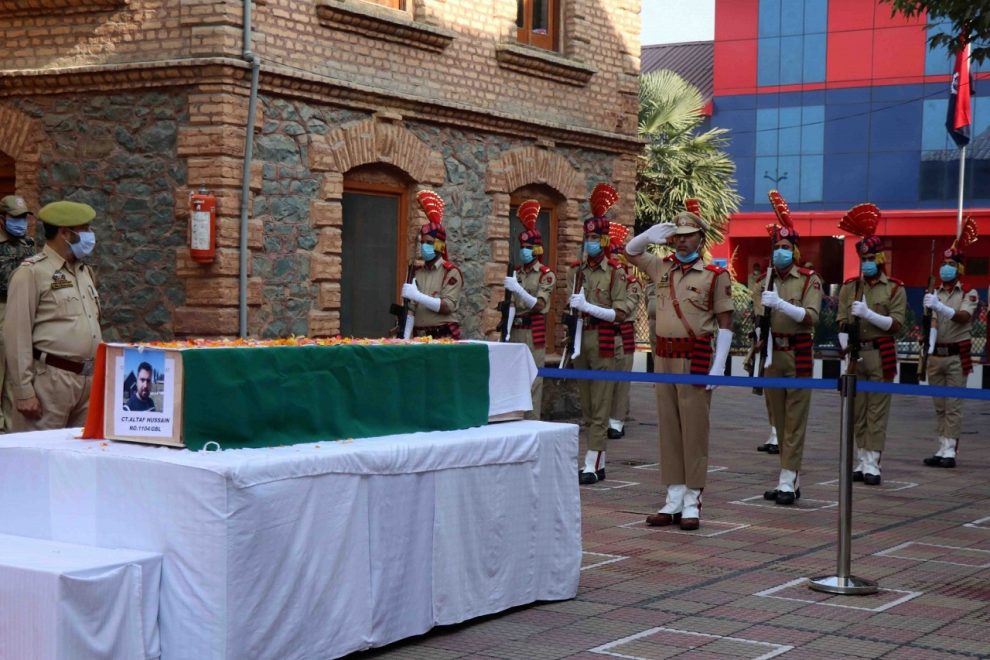 Recently an unusual phenomenon occurred in Kashmir valley, when thousands of Kashmiri Muslims, most of whom were from Sunni Sect turned at the funeral event of a slain Shia Muslim policeman in downtown Srinagar, who died on duty while protecting a Kashmiri Muslim political leader associated with a national party with Hindu ideology. This was a unique event that unconsciously involved Kashmiri Shias, Kashmiri Sunnis and Hindus, where cutting across sectarian, religious and political ideological lines, Kashmiris came together to mourn for a loss of one of their own in a show of humanitarian gesture.

The slain policeman was Altaf Hussain, who was deputed as a PSO to BJP legislator Ghulam Qadir Rather from Ganderbal district. The fleet of BJP legislator came under attack from militants, while he was on his way to a safe quarter in Kangan in Ganderbal district, where many political leaders reside for security reasons. Both Altaf Hussain and another cop tried to shield Ghulam Qadir Rather from bullets and Altaf Hussain died while shielding the BJP leader. A militant Shabir Ahmad Shah also died in the retaliation. Incidentally, all characters in this event happen to be Kashmiri Muslims from different sects, profession and political ideology but united by this event, which to many people within Kashmir may seem to be a routine affair, but the events that unfolded subsequently point to its unusualness. No one expected such a massive gathering of people to come for mourning of a slain policeman, lest of all, the one who has died on duty, while protecting a legislator of a national Hindu party. Even under normal circumstances, whenever a Kashmiri policeman dies on duty, there is usually a collective “celebration” by a vast majority of Kashmiri people, who see the members of Jammu & Kashmir police as “collaborators” and “traitors”. Therefore, such a large turnout at Altaf Hussain’s funeral was indeed surprising to many Kashmir observers.

What does it indicate? Is there a change happening in the Kashmiri public view of Kashmiri policemen?

I think it is too early to come to generalized conclusions but this incident has indeed high lighted the predicament of the police personal of J&K police, especially those working in Kashmir valley from the Kashmiri Muslim community. While the police force in general has a rather poor reputation in all parts of the world including India on account of corruption, extra judicial killings and harassment etc., Kashmir is especially a tough place for a policeman to operate because he is additionally involved in militancy operations on top of his routine job of maintaining civilian law and order. This is a very difficult track to tread upon because essentially Kashmiri policemen comes from the same society and people as civilians and militants do – mostly Kashmiris and mostly Muslims.

The binary of “Kashmiri Muslim” identity makes it extremely difficult for a Kashmiri policeman to work on ground, while maintaining a balance between the requirement of his duty as a security personal and a Kashmiri, who is often in confrontation with a fellow Kashmiri – be it civilians or militants. It goes to the credit of the members of J&K policemen from Kashmir valley that despite these dilemmatic conditions, they have worked in the most professional manner under some of the most stressful, dangerous and tough conditions.

It is not deniable that a section of Kashmir police force has indeed indulged in corrupt and rogue behavior but most members of Kashmir police force continue to work extremely hard under extremely difficult and dangerous conditions and continue to die in violent encounters in what they feel has become a thankless job. This feeling of thanklessness has largely emanated from Kashmiri society’s rather hypocritical response and attitude towards their fellow Kashmiri policemen, who are both Kashmiri and Muslims like rest of them.

Given the scale of unemployment in our UT (and formerly a state), a policeman or policewoman’s job has been one of the most coveted and sought after by a large number of semi-educated Kashmiri young men and women and a symbol of financial security. One does not rule out the ills of corruption in police force but given the unusual security circumstances in which a jawan of Kashmir police force has to work and operate actually makes his or her job even much more dangerous.

So why is it that the same Kashmiri society that would secretly desire their son or daughter to be in police force (and thereby a financially secured government job) would at the same time also label them as “collaborators” and “traitors” and collectively erupt into celebration, whenever the news of a death of a Kashmir cop in some security operation breaks out? A large percentage of Kashmiri Muslim population is directly or indirectly linked with someone or the other, who is in police force, so by hating Kashmir police, we actually end up hating ourselves. Therefore, a large turnout at slain cop Altaf Hussain’s funeral was indeed pleasantly surprising and extremely unexpected. This perhaps shows that Kashmiri people at the end of the day cherish humanity and kindness driven behavior for which he or she has always been known for. And that is where the optimism lies that even after so much of suffering Kashmiris still haven’t abandoned their trait of kindness, empathy and humanity.

The author is an Aspiring Politician. He is a distinguished Political Analyst and renowned Columnist. He also served as PRO to Ex. CM of Erstwhile state of J&K.His Views are personal. He can be reached at [email protected]