Note: In this book excerpt from the travel memoir “Return to Sri Lanka: Travels in a Paradoxical Land”, the author has chronicled the origins and history of the Sri Lankan Muslim community. Razeen Sally was born to a Sri Lankan Muslim father and a Welsh mother.
At the time, Mummy had only the faintest notion that marrying into a Ceylonese Muslim family meant she was also marrying into a distinctive religious and cultural community. Everything was so new to her. But she was open, adaptable and eager to blend in.

There are about two million Muslims on the island – just under 10 per cent of the population. Well over 90 per cent are Sunni ‘Moors’; they trace their descent to Arab and Persian traders from the Gulf and Yemen, who rode the monsoon winds to dominate Indian Ocean trade.

In the southern coastal town of Beruwela there is the small Kechimalai mosque, believed to be one of the oldest on the island. Beruwela was the first major Arab Muslim settlement in Sri Lanka, going back to the ninth century CE. Its location is perfect, roughly halfway on the ancient trade route between the Middle East and the Southeast Asian archipelagos. The mosque stands bleach-white on a promontory. From afar, approaching Beruwela on the coast road from Colombo, it gleams with purity, and seems to float ethereally, suspended between land and sea. Round the back, once through its simple fanlighted doors and unadorned interior, is a dargah, the shrine, it is said, of a Yemeni trader who died in 1024 CE. Sri Lanka’s oldest recorded stele with a Koranic inscription, a tombstone found on a little island off the north-east coast, dates back much earlier, to the eighth century CE.


Muslims knitted the island together through trade, both before and after Portuguese conquistadors muscled in in the early 1500s. Sri Lanka’s Arab trading heritage, however, predates Islam itself. The Chinese pilgrim-monk Faxian, who sojourned in the Sinhala Buddhist kingdom of Anuradhapura in the fifth century CE, noted that the king conceded a section of his capital to Arab traders. They exported local produce from big warehouses in Mantota and Mannar on the north-east coast, and were favoured at court. The Alexandrite Claudius Ptolemy created his second-century CE map of the island from information he gleaned from Arab traders.
Join 'The Dispatch' on WhatsApp.

The Greek merchant Cosmas Indicopleustes described the island as the hub of Indian Ocean trade in the sixth century CE. By the eighth century, the Arab Muslims who now dominated this trade probably converted locals of pre-Muslim Arab descent to the new faith. Sri Lanka became famous in the Arab world for its cinnamon and rubies. Hindu rulers in Kerala and Buddhist rulers in Sri Lanka, eager for revenue, continued to welcome Arab traders. These men took local wives; Muslim settlements fanned out on the Malabar and Coromandel coasts, and in coastal south-west Sri Lanka. Muslims became commercially dominant in ports such as Calicut and Colombo. In Sri Lanka, by the twelfth and thirteenth centuries, they had established island-wide networks of agents and sub-agents to procure and sell goods for trade. Strong commercial, cultural and migrational ties developed between Muslims in Sri Lanka and South India. Tamil became their common mother tongue.

Their fortunes reversed with the Portuguese encounter. When Lourenço de Almeida’s expedition sailed from Goa into Colombo harbour in 1505, the Portuguese found a small Muslim trading town with two mosques, surrounded by white parapet walls. Almeida concluded a treaty with the local Sinhala Buddhist king, which gave the Portuguese trading rights, but local Muslim traders resisted. Only after the Portuguese built a fort in Colombo, in 1519, did the tide really turn. Under Portuguese pressure, the king expelled Muslim traders from his territory in 1526.
By the end of the century, the Portuguese had expelled Muslims from coastal territory they controlled. Oppression, though less brutal, continued under Dutch occupation in the following two centuries. Still, Muslims found refuge, and prospered, in the interior Sinhala Buddhist Kandyan kingdom, which rebuffed European colonists before finally succumbing to the British in 1815.

Muslims did well during the century and a half of British rule. They were free to practise their faith. As small shopkeepers and big businessmen, they took full advantage of expanding commercial opportunities. However, unlike Tamils, Christians and elite Sinhalese, they did not take advantage of English-language education, preferring to stick to trade rather than go into government service or the professions. ‘Ceylon Moors’ – Sunnis claiming Arab Muslim descent – remained the majority. But now there were also ‘Coast Moors’, Tamil Muslim traders from coastal South India who came over during British rule. Sri Lanka also became home to a small community of Malays, the descendants of Javanese soldiers and exiled nobles brought over by the Dutch, and even smaller communities of Indian Muslim trading castes of Bohras and Khojas, off shoots of Shia Islam, and Memons, a Sunni offshoot. Sufism, the mystical devotional branch of Islam, also flourished.

In July 1961, Mummy encountered not just a new Muslim family, consisting of Daddy’s parents, siblings, young nephews and nieces, and a vast extended family of uncles, aunts and first, second and third cousins. She also began her encounter with Muslim communities dotted all over the island, along the coast and in the interior, in towns large and small. The mosque, the shops; the men in prayer caps, long, flapping white shirts and sarongs, sporting goatees or wispy beards; the women wrapped in saris, which cover their heads as well as their bodies – these are tell-tale signs of a Muslim trading neighbourhood. Mummy saw these scenes first in Colombo, then in Daddy’s home town of Badulla, and afterwards, over the next decade and a half, on countless trips around the country.


Trading, as Mummy soon discovered, is in the family blood. Now, when I take her back for her annual December–January visit, we meet innumerable male in-laws, cousins, nephews and distant relatives who trade in one form or another. A plurality are in ‘gems’: Muslims still dominate the gems and jewellery trade.
Some of my forefathers probably came as traders from the Gulf and Yemen, Lord knows how many centuries ago. My grandmother harboured the conceit that we descend from Moroccan princes. But, cleaving to an Arab race myth, Sri Lankan Muslims conveniently forget they have South Indian blood coursing through their veins – the product of Arab settlement and miscegenation on the Malabar and Coromandel coasts, and subsequent intercourse with Muslim trading communities in Sri Lanka.
Tamil became the lingua franca of South Indian and Sri Lankan Muslims, not only because it prevailed in South India, but also because it was, for more than a millennium, the region’s main language of commerce. Then, from the late nineteenth century, English insinuated itself into the lives and homes of a select minority of educated and prosperous Muslims. Daddy’s mother and her siblings went to English-medium schools run by European nuns and priests, and sent their children to such schools, too. Daddy and his siblings were probably the first generation to speak English as their preferred language. But the sounds of Tamil still rang constantly at home.

Nevertheless, Sri Lankan Muslims, insisting they are ‘Moors’ or ‘Malays’, never call themselves ‘Tamils’, unlike Muslims in Tamil Nadu, who have no problem calling themselves ‘Tamilian Muslims’. Nowadays, when I visit Aunty Iyna, Daddy’s youngest sister, in her Colombo home, I tell her that we – our family, and the Muslims of Sri Lanka – are more Tamil than anything else, knowing exactly the reaction I will provoke. ‘No,’ she expostulates. ‘We are Moors, descended from Arabs. We are not Tamils.’ She will turn, the next moment, to chatter away in Tamil to a relative or servant.

The tiny Malay Muslim minority numbers no more than 40,000, or 0.2 per cent of the Sri Lankan population. Family lore has it that my grandfather’s ancestors were aristocrats at the court of the sultan of Mataram in Java. They were Javanese, but also of Arab descent. My grandfather’s great-grandfather married another aristocrat, but against the wishes of the court. He had to flee Java and fetched up in Ceylon, when both Ceylon and the East Indies were Dutch colonies. 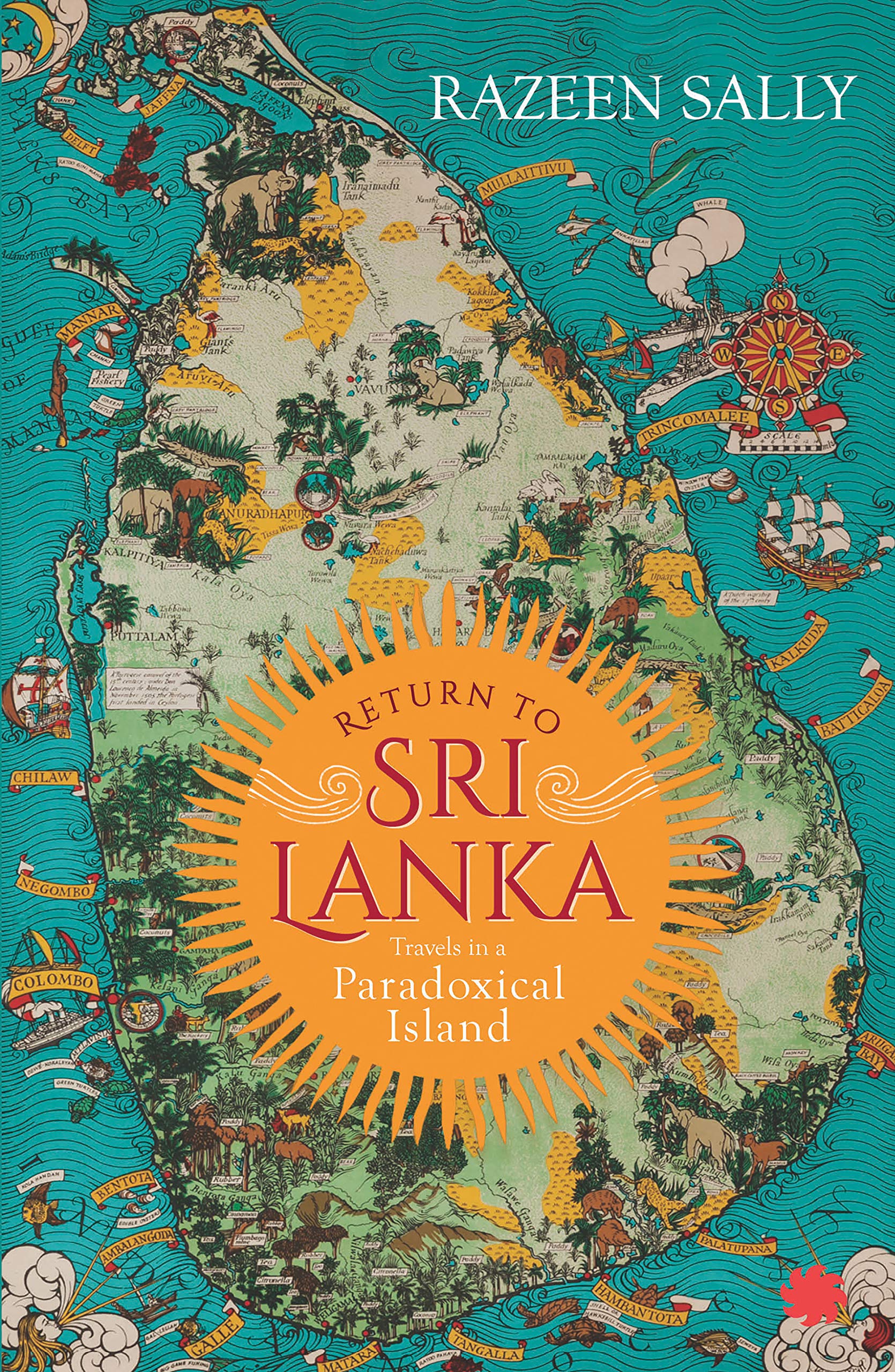 Excerpted with permission from Return to Sri Lanka: Travels in a Paradoxical Island, Razeen Sally, Juggernaut Books. Read more about the book here and buy it here.

Books authored by Mirza Waheed and Santanu Das win The Hindu Prize 2019
In this mystery-thriller, the protagonist dodges smugglers to return a precious relic to the historical Indian monument where it belongs