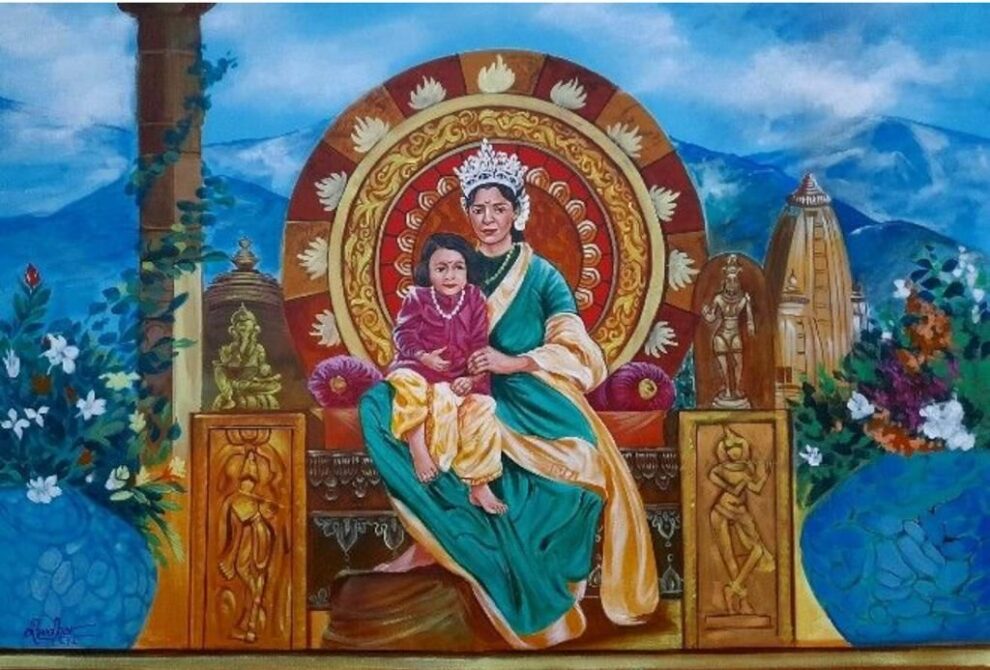 According to Nilamata Purana , Kashmir did not participate in the war of Mahabharata along with other Kingdoms of India though it was very important Kingdom. It is explained in the dialogue between Janamejaya and Vaisampayana the pupil of Ved Vyasa as follows:-

The King of Kashmir Gonanda was invited by his relative Jarasandha to join him in the war against the Yadavas. Gonanda joined the war and was killed by Krishana’s brother Balrama during the battle. Gonanda’s son Damodara wanted to avenge his father’s death. When lord Krishna was in Gandhara attending a Svayamvara ceremony, he decided to go to Kill Krishna but instead, Krishana killed him. Keeping in view the sacred special status of Kashmir and womenfolk of the region, Krishana coronated Damodara’s pregnant widow Yashomati as the ruler of Kashmir. Thus Yashomati became the first woman ruler of Kashmir.

After some years, When the Mahabharata war took place, her son was still a minor. Yashomati chose not to participate in the Mahabharata from either side and remained neutral and saved her region from ruin caused by war in the rest of India.

After the death of her husband, King Damodar, at the hands of Krishna in the battle field, the ruling elites were shocked to hear Krishna’s command that Yashomati will occupy the throne who is pregnant having the infant of the deceased king in her womb. The queen ruled the kingdom with a stern hand, identifying the corrupt and anti-people officers. She punishes them severely and is prompt to deliver justice to the aggrieved. She wins the hearts of her people. Exposed, the members of the council are working day and night to over-throw the queen. In due course, Yashomati gives birth to a male heir to the kingdom. The council of ministers in league with the royal priest, decides to enthrone the infant, forcing the queen to abdicate the throne. Brave, wise and master strategist as she is, she inflicts crushing defeat on the conspirators, determined to impart the right education to her son befitting of a brave, just and kind ruler.

In due course, Yashovati gave birth to a male heir to the kingdom.

History informs us that Sri Krishna also named the child Gonanda . However  the council of ministers in league with the royal priest, decided to enthrone the infant, forcing the queen to abdicate the throne. Brave, wise and master strategist, Yashovati understood the gameplan and  inflicted crushing defeat on the conspirators,. She also gave proper  education to her son befitting of a brave, just and kind ruler. She was the first woman ruler of Kashmir. Her rule gave Kashmir peace , stability and corruption free administration . History has been unkind to her as she has not been given much deserved space and remains unknown.

A noted figure in the Indian legal fraternity, Ashok Bhan is a lawyer at the Supreme Court and an expert on Kashmir affairs

Join The Dispatch Whatsapp Group to stay updated
The Dispatch is present across a number of social media platforms. Subscribe to our YouTube channel for exciting videos; join us on Facebook, Intagram and Twitter for quick updates and discussions. We are also available on the Telegram. Follow us on Pinterest for thousands of pictures and graphics. We care to respond to text messages on WhatsApp at 8082480136 [No calls accepted]. To contribute an article or pitch a story idea, write to us at [email protected] |Click to know more about The Dispatch, our standards and policies
TagsKashmir Mahabharata