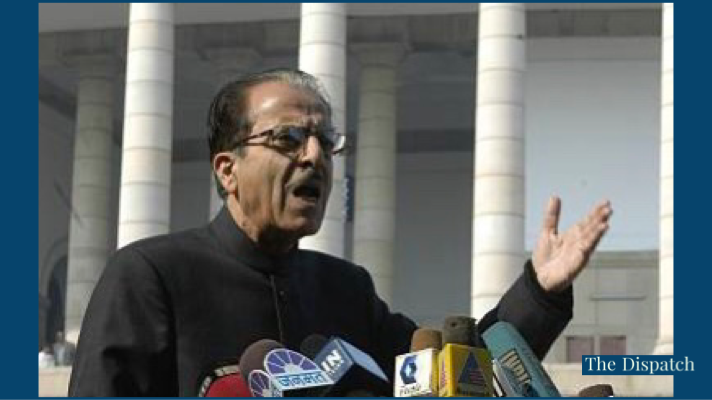 Jammu: The man this country has held singularly responsible for fall of 13-month-old Atal Behari Vajpayee government in 1999, surprised everyone again when he said that he was never against the BJP stalwart.

A day after former Prime Minister Atal Behari Vajpayee passed away, veteran parliamentarian and senior Congress leader Prof Saifuddin Soz had said in 2018 that he was never against the BJP leader as such. Then why did Soz vote against Vajpayee?

In 1999, the J. Jayalalitha led AIADMK withdrew support from the Vajpayee government necessitating a floor test in the Lok Sabha. Counting on the allies, including National Conference of Jammu and Kashmir, Vajpayee’s floor managers were confident of obtaining the minimum required number to keep the government safe. As the voting took place on April 17, 1999, there was a surprise shock. Even as the Odissa Chief Minister who had yet to resign from Lok Sabha was a surprise voter on the day no-confidence motion, the fall of Vajpayee government has always been attributed to Prof Saifuddin Soz who was a National Conference MP then.

Soz was also the one who claimed the credit for the fall of Vajpayee government as he said outside the Parliament that he listened to call of his inner conscience asking him to bring down ‘communal forces’. The National Conference which was in support of BJP led alliance was left red faced.

Was Soz’s decision of voting against Vajpayee government ideological?

A book, titled ‘Vajpayee: The Years That Changed India’ written by Shakti Sinha who served as former prime minister Atal Bihari Vajpayee’s private secretary for many years including in the PMO suggests that better treatment of Soz, whose party at that time, the National Conference, had two MPs, might have elicited a more positive response from him.

The then Jammu and Kashmir chief minister Farooq Abdullah, also the head of the NC, pushed his son Omar Abdullah, another MP of his party, hard and “sidelined Soz in an extremely petty manner”.

According to the book, Soz had suggested the name of a certain person for India’s official delegation for Haj but Farooq Abdullah had it removed.

When Vajpayee visited Srinagar on December 6, 1998, he was supposed to meet ministers of the local government, Sinha notes, adding that since they were running slightly late, Abdullah dismissed the meeting in an “extremely cavalier” manner.

“Vajpayee paid the price. While Omar Abdullah voted for the confidence motion, Soz voted against,” he says.

Shakti Sinha’s book offers a detailed account of the first BJP-led government’s functioning and how it fell in only 13 months at the helm after mercurial AIADMK supremo J Jayalalithaa withdrew her party’s support.

Join The Dispatch Whatsapp Group to stay updated
The Dispatch is present across a number of social media platforms. Subscribe to our YouTube channel for exciting videos; join us on Facebook, Intagram and Twitter for quick updates and discussions. We are also available on the Telegram. Follow us on Pinterest for thousands of pictures and graphics. We care to respond to text messages on WhatsApp at 8082480136 [No calls accepted]. To contribute an article or pitch a story idea, write to us at [email protected] |Click to know more about The Dispatch, our standards and policies
TagsAtal Behari Vajpayee Fall of Vajpayee Government Prof Saifuddin Soz Vajpayee Farooq Vajpayee Government Vajpayee-Kashmir