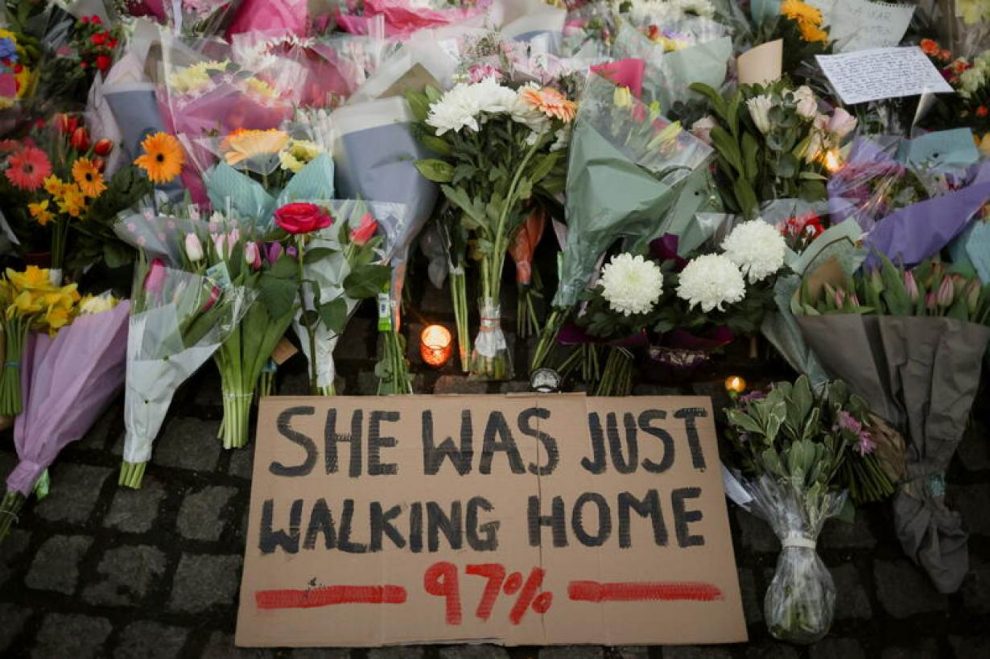 LONDON, March 14 (Thomson Reuters Foundation) – Women around Britain joined vigils this weekend to mourn the death of Londoner Sarah Everard and called for tougher action on violence against women after her murder ignited a widespread debate about the safety of women.

Police are facing calls for investigations after clashing with crowds at a vigil on Clapham Common in south London near where Everard disappeared, a well-lit and highly populated area of the capital.

Outrage over her killing has drawn wider scrutiny over policing, the law and society.

Women’s rights groups are demanding to know why only 1.5% of recorded rapes and 3.6% of all sexual offences face prosecution in England and Wales – and what is being done to stop a spike in domestic violence cases during the coronavirus pandemic.

Who is Sarah Everard and how did she die?

Marketing executive Everard, 33, disappeared while walking home from a friend’s house in south London at about 9.30pm on March 3. She was spotted smiling on CCTV as she walked home in her trainers, a green rain jacket and headphones.

Several days after her disappearance, a body was found in woods about 50 miles (80 km) away in southeast England and forensics teams took several days to confirm it was Everard.

What do campaigners want?

Vigil organisers and women’s rights group Reclaim These Streets said they hoped the events would mark “the start of a movement that will light a fire for change”.    Women and campaigners say they want action so everyone can walk the streets without fear, while debates on preventing abuse must focus less on women protecting themselves and more on preventing men’s abuse and violence.

Some said police forces are “systematically” failing women and have called for radical rehauls of criminal justice systems or to defund police.

The National Police Chiefs’ Council recognised concerns over the policing of the London vigil, said chair Martin Hewitt, as he announced an emergency meeting of chief constables on Monday to discuss how to better protect women from male violence.

“We remain absolutely committed to helping to keep women safe, and feeling safe,” he said in a statement.

The Crown Prosecution Service has also vowed in recent days to increase prosecutions for violence against women.

Criticism over the Metropolitan police’s handling of the vigil also brought fresh scrutiny over a draft government bill that would increase police powers over protest, with the opposition Labour party announcing it will be voting against it.

What are the current conviction rates for cases involving violence against women and girls in the UK?

There are a huge range of offences, making it hard to snapshot gender disparities – not the mention the many incidents that are not reported or do not reach court.

Only 3.6% of sexual offences cases recorded by police resulted in a charge or a summons to court, showed latest annual official data, of which rape cases had a rate of 1.5%.

Those figures compare to a 7% rate for the violence against the person, 5% for theft and 23% for drug offences.

A report analysing the killings of 1,425 women by men between 2009-2018 found 62% of perpetrators were convicted of murder, but noted sentences for manslaughter in intimate violence cases were often relatively light.

In Britain’s parliament last week, that coincided with International Women’s Day, MP Jess Phillips read out a list of the 118 women who had been killed in the past year.