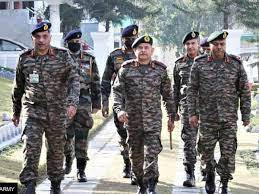 UDHAMPUR: General Officer Commanding-in-Chief (GOC-in-C), Northern Command Lieutenant General Upendra Dwivedi on Tuesday said That the ‘Whole of nation’ approach has led to the progressive improvement in the security situation in Jammu and Kashmir and Ladakh.

Speaking at the Investiture Ceremony 2022 of the Northern Command at Udhampur, the GOC-in-C said that the Command is in a ‘high state of readiness to face constantly evolving threats and challenges on Northern and Western Fronts in addition to the internal security.

He presented gallantry awards as well as distinguished service awards to the gallant Officers, Junior Commissioned Officers and Other Ranks during the ceremony.

“Northern Command is in a high state of readiness to face the constantly evolving threats and challenges. The security situation in Northern Command continues to remain volatile, as we are the only command in active operations facing adversaries from both the Northern and Western front, in addition to the internal security threats,” the General officer said while addressing the officers and distinguished guests, adding that Indian army was a peace-loving force, but “in case of any misadventure, our reply will be a befitting one.”

The GoC-in-C said that “The ‘Whole of nation’ approach has led to the progressive improvement in the security situation in Jammu and Kashmir and Ladakh. The extraordinary zeal and motivation among all ranks re-assures me that security of our borders is in safe hands.”

The Army Commander said that 2021 was an exigent year for the Indian Armed Forces.

“Our troops have displayed exceptional bravery through a well-coordinated and an aggressive response strategy on the Northern borders. Our forces have shown exemplary courage and remarkable fortitude in these testing times. I, convey my heartfelt gratitude to the brave soldiers of the Indian Army for their supreme sacrifice in the line of duty defying all odds in Op Rakshak, Op Meghdoot And Op Snow Leopard,” he said.

“We are committed to defending India’s sovereignty and territorial integrity and believe in a constructive dialogue through both military and diplomatic means to resolve the border issues,” the officer said. “Restoration of peace and tranquillity to enable progress in bilateral relations has been and will remain our constant endeavour. We are keeping a constant watch on all developments and will take all necessary steps to protect our National Interests.”

Lt General Dwivedi said that besides operational challenges on the LAC and LC, we remain committed to providing succour in times of natural disasters which includes COVID-19.

He also exhorts all ranks of Northern Command to be prepared for varied challenges on the internal and external security front.-

The GoC-in-C expressed gratitude to the people of Jammu and Kashmir and Ladakh, the civil administration and all others concerned for their unstinted support and wished for peace and contentment for the people of the regions.

“The nation looks upon us in times of crises and we have to live up to the hopes and trust reposed on us by our countrymen,’ the army commander said.

Out of the gallantry awards, nineteen of them were awarded posthumously to the next of kin of the soldiers who laid down their lives in the service of the nation.

The Army Commander Commended all ranks of Northern Command for their dedication and devotion to duty in the highest traditions of the Indian Army. Sunita Dwivedi, Regional President Army Wives Welfare Association (AWWA), Northern Command interacted with the next of kin and presented them with a token of appreciation for the sacrifices—(KNO)

Govt to start vaccination drive for children between 12-14 age group from tomorrow
Till 2020, over 750 people were arrested under UAPA in J&K: MHA
Comment