New Delhi wasn’t always the capital of India. While it had long served as a center of finances and politics, it wasn’t until Feb. 13, 1931 that the capital officially moved from Calcutta and New Delhi was inaugurated by the Viceroy Lord Irwin.

The foundation stone of the city was laid by Emperor George V during the Delhi Durbar of 1911. It was designed by British architects, Sir Edwin Lutyens and Sir Herbert Baker.

The contract was given to Sardar Bahadur Sobha Singh. He was an Indian civil contractor, prominent builder and real estate developer of Delhi. He is the father of famous Indian writer Khushwant Singh.

Four million British pounds was the cost of shifting the entire administration from Kolkata to Delhi.

New Delhi is structured around two central promenades called the Rajpath and the Janpath.

The Rajpath, or King’s Way, stretches from the Rashtrapati Bhavan to the India Gate, was built similar to the Champs-Élysées in Paris is the ceremonial boulevard for the Republic of India.

The Janpath (Hindi: “Path of the People”), formerly Queen’s Way, begins at Connaught Circus and cuts the Rajpath at right angles.

19 foreign embassies are located on the nearby Shantipath (Hindi: “Path of Peace”), making it the largest diplomatic enclave in India.

At the heart of the city is the magnificent Rashtrapati Bhavan (formerly known as Viceroy’s House) which sits atop Raisina Hill. The Secretariat, which houses ministries of the government of India, flanks out of the Rashtrapati Bhavan. The Parliament House, designed by Herbert Baker, is located at the Sansad Marg, which runs parallel to the Rajpath.

Connaught Place is a large, circular commercial area in New Delhi, modelled after the Royal Crescent in England. Twelve separate roads lead out of the outer ring of Connaught Place, one of them being the Janpath.

The construction of New Delhi as a capital of the British empire was part of a British effort to expand its presence in the country. It’s architecture was chosen with one single chief consideration: to be a symbol of British power and supremacy. All other decisions were subordinate to this, and it was this framework that dictated the choice and application of symbology and influences from both Hindu and Islamic architecture. 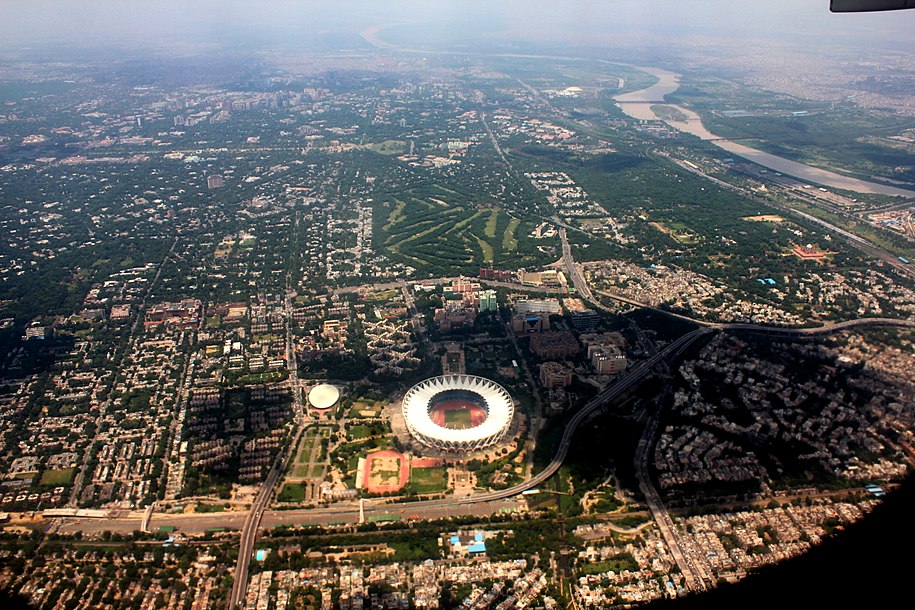 One of the reasons for declaring it the capital was that Delhi was the financial and political centre of many empires including Mughals that had earlier ruled India.

It has been well known that between 3000 BC and the 17th century AD, Delhi was supposed to be the site for a total of seven different cities.

In Sanskrit, Delhi was referred to as Hasthinapur, which means ‘elephant-city’.

There were a total of 14 walled gates that protected the city in the beginning. Five of them. Ajmeri Gate, Lahori Gate, Kashmiri Gate, Delhi Gate, and Turkman Gate are still standing.

Although colloquially Delhi and New Delhi are used interchangeably to refer to the National Capital Territory of Delhi (NCT), these are two distinct entities, with New Delhi forming a small part of Delhi. The National Capital Region is a much larger entity comprising the entire NCT along with adjoining districts in neighbouring states.