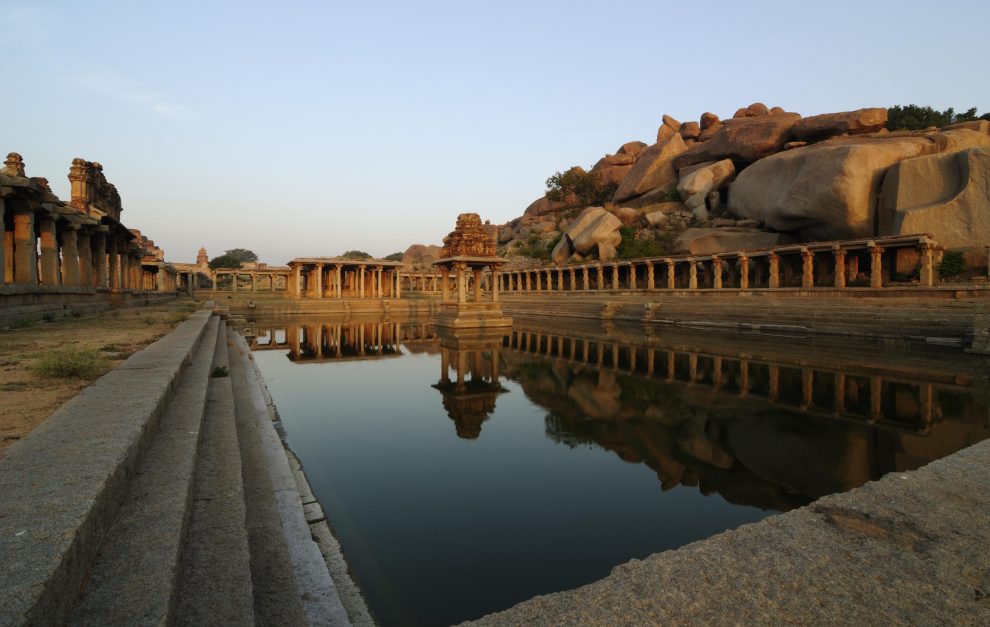 What Foreign Travellers Saw in Vijayanagar

Vijayanagar is ‘the best provided city in the world’, wrote one traveller. It is of ‘enormous magnitude and population’, wrote another. Our historical knowledge of Vijayanagar comes from a range of sources, such as inscriptions on stone and copper plates, archaeology, literary works, temple land grants and trade records. A Persian chronicler in the employ of Deccan sultans, Muhammad Kasim Firishta, has left many details though he wrote a generation after the sacking of Vijayanagar, and his accounts often seem dubious and lurid, especially of war. At times, he seems partial to the perspective of his patrons and exaggerates their side’s military exploits. Finally, a good chunk of what we know about Vijayanagar comes from the eyewitness accounts of foreign travellers.

Among the travellers whose writings on Vijayanagar have survived are Niccolo de Conti, a Venetian merchant (1420); Abdur Razzaq Samarqandi, a Persian scholar-envoy (1443); Duarte Barbosa, a Portuguese officer (c. 1515); and Domingo Paes (c. 1520) and FernaoNuniz (1535–37), Portuguese merchant-adventurers. While much of what they describe is real and useful, some of them lacked adequate language skills or cultural context to know what they were looking at. They moreover wrote for audiences back home, often relied on hearsay rather than personal observation and held various cultural biases towards the ‘heathens’ and ‘idolaters’ of the subcontinent. They were more drawn to things they found strange or shocking and they often exaggerated them. One such was the incidence of sati, writes Thapar. So care must be taken in interpreting their words. From the following selections of the travellers’ observations, we get a sense of Vijayanagar’s rulers, flourishing economy and trade, social customs and festivals and more.

Years after visiting Vijayanagar in 1420, the Italian merchant Niccolo de Conti narrated stories from his Asian voyage to a scholarly scribe. Vijayanagar’s circumference, Conti claims, is sixty miles and ‘in this city there are estimated to be ninety thousand men fit to bear arms’. Conti says about the king of Vijayanagar, Deva Raya I:

Their king is more powerful than all the other kings of India [and has] twelve thousand wives, of whom four thousand follow him on foot wherever he may go, and are employed solely in the service of the kitchen. A like number, more handsomely equipped, ride on horseback. The remainder are carried by men in litters, of whom two thousand or three thousand are selected as his wives on condition that at his death they should voluntarily burn themselves with him, which is considered to be a great honour for them.

Conti describes temple rituals that are still performed today, but also a chariot festival in which ‘young women richly adorned … sing hymns to the god’, while others, ‘carried away by the fervor of their faith, cast themselves on the ground before the wheels, in order that they may be crushed to death—a mode of death which they say is very acceptable to their god’. One practice Conti had observed in central India likely also existed in the Vijayanagar Empire: ‘They have a vast number of slaves,’ he claims, ‘and the debtor who is insolvent is everywhere adjudged to be the property of his creditor’. This seems to describe bonded labour, then common in many parts of the world.

Conti writes that the people of Vijayanagar celebrate their weddings ‘with singing, feasting, and the sound of trumpets and flutes, for, with the exception of organs, all the other instruments in use among them for singing and playing are similar to our own’. He mentions a festival during which ‘they fix up within their temples, and on the outside of the roofs, an innumerable number of lamps of oil’, and another festival when ‘they sprinkle all passers-by, even the king and queen themselves, with saffron water, placed for that purpose by the wayside. This is received by all with much laughter’.

Conti tended to record more of the exotic or outlandish things, less so the charming or praiseworthy ones. His account also contains some odd observations, such as, ‘Pestilence is unknown among the Indians.’ In India, he met and married an Indian woman and had four children with her, all while travelling together. Sadly, two of the children and his wife died in a pestilence in Egypt, and Conti finally returned to Venice with his remaining children.

In 1443, Abdur Razzaq visited from Persia and was very impressed by Vijayanagar’s ‘enormous magnitude and population’ and its seven concentric walled fortifications of stone. The outermost, writes Razzaq, had ‘strong gates, and the guards stand watch with the eye of caution for the slightest thing’. Inside are orchards, gardens, buildings, shops and bazaars. The king is Deva Raya II, ‘of perfect rule and hegemony’ with ‘around three hundred ports’ and an army of, Razzaq guesses, ‘more than a thousand elephants’ and 1.1 million men. ‘In all of Hindustan,’ writes Razzaq, ‘there was no raja more autocratic than he’ and in whose ‘presence the Brahmins have great status’.

Razzaq is hosted in ‘extremely fine quarters’. When he meets the king, Razzaq offers him ‘five fine horses and two toquzes of damask silk and satin’. The youthful king, dressed in ‘a tunic of Zaytuni silk and a necklace of lustrous pearls’, receives him graciously and offers him the customary betel leaf and supari, thought to have amazing benefits for dental health and virility. He grants Razzaq a daily ration of ‘two sheep, four pairs of fowl, five maunds of rice, one maund of oil, one maund of sugar, and two gold varahas [large coins]’.

The king has many wives, ‘seven hundred ladies and concubines’, and he keeps ‘strict control over the affairs of each one’. Male kids, writes Razzaq, could stay with their mothers in the harem only until ten. ‘Throughout his realm wherever there is a beautiful girl, he persuades the girl’s mother and father and has her brought with much celebration to his harem. Thereafter no one sees her, but she is kept in great honor and veneration.’

About the city’s bazaars, he writes:

The bazaars are extremely broad and long. Flower sellers have tall platforms in front of the stalls, and on both sides they sell flowers . . . there are aromatic flowers continually in bloom, and as necessary as they deem food to be, they cannot bear [to be] without flowers. The practitioners of every craft have stalls adjacent to one another. The jewelers sell pearls, diamonds, rubies and emeralds openly in the bazaar . . . All nobles and commoners of the region, even the craftsmen of the bazaar, wear pearls and jewels in their ears, around their necks and on their arms, wrists and fingers.

The ‘elaborateness of their brothels,’ writes Razzaq, ‘or of the beauty, blandishments and attraction of their courtesans is beyond my ability to express’. Prostitutes, adorned ‘with costly pearls and jewels and fine clothing, are quite young and extremely beautiful, and with each stand one or two serving girls’. They ply their trade on attractive streets, waiting for customers on chairs outside rows of chambers ‘as clean as can be’. Taxes on their income, Razzaq claims, pay for the city’s police services. If the policemen can’t find an object reported lost or stolen, they fully compensate the owner for it. Razzaq witnesses this personally. ‘Several slaves that my companions had bought ran away,’ he writes, and the policemen, after a futile search ‘in the quarter where the poor lived’, paid the fair price for each slave to the owners.

Razzaq also attended the Mahanavami festival at Vijayanagar, when a grand annual celebration was held in the royal centre for many days. He describes decorated multi-storeyed pavilions raised at the festival grounds, where mostly young female singers, dancers and reciters perform ‘in an astonishingly enchanting manner’. Elephants perform circus tricks. Generous rewards are given. All the chiefs and governors of the realm are present, with their ‘elephants roaring and raging like mountains and thunderclouds, adorned with weaponry and embellished with howdahs, with acrobats and pyrotechnists, and on the elephants’ heads, trunks and ears amazing pictures and strange designs painted in cinnabar and other [colours]’.

Soon after leaving the city for Calicut, Razzaq heard of a shocking assassination attempt on the king by his own brother. A festival had been organized and amid the sound of drums, the king, along with his other brothers, generals and ministers had been lured into traps and stabbed. But the injured king had somehow survived and regained control. Retribution followed: ‘All those who had in any way aided in the conspiracy were put to death. Men in great numbers were slain, flayed, burnt alive, and their families entirely executed. The man who had brought the letters of invitation [to the festival] was put to the last degree of torture.’

Indeed, the threat of assassination or usurpation and the need to pre-emptively strike were occupational hazards for a king—‘five assassinations and four usurpations’ occurred in Vijayanagar’s Sangama Dynasty alone. Paranoia was commonplace. According to Fernao Nuniz, Virupaksha Raya (1465–85) had summoned one of his regional governors and had him put to death solely because in his dream the governor had entered his room to kill him.

Excerpted with permission from Indians: A Brief History of a Civilisation, Namit Arora, Penguin India. Read more about the book here and buy it here.

Join The Dispatch Whatsapp Group to stay updated
The Dispatch is present across a number of social media platforms. Subscribe to our YouTube channel for exciting videos; join us on Facebook, Intagram and Twitter for quick updates and discussions. We are also available on the Telegram. Follow us on Pinterest for thousands of pictures and graphics. We care to respond to text messages on WhatsApp at 8082480136 [No calls accepted]. To contribute an article or pitch a story idea, write to us at [email protected] |Click to know more about The Dispatch, our standards and policies
TagsIndians: A Brief History of a Civilization Namit Arora Penguin India Vijayanagar Empire