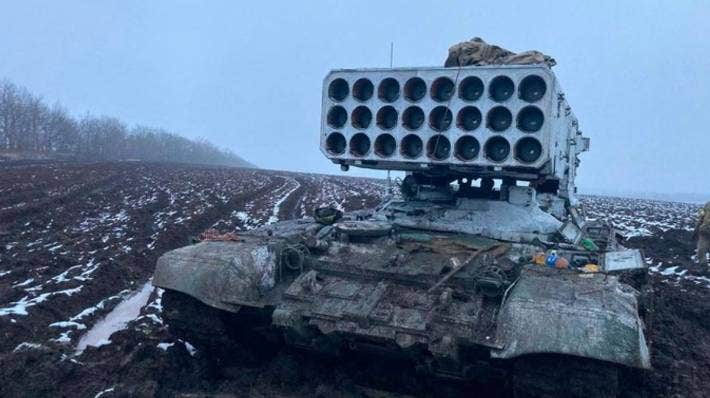 Melbourne, Mar 3: Russian forces in Ukraine may have used thermobaric weapons and cluster bombs, according to reports from the Ukraine government and human rights groups.

If true, this represents an escalation in brutality that should alarm us all.

While cluster munitions are banned by international convention, thermobaric munitions also known as fuel-air explosive devices, or vacuum bombs are not explicitly prohibited for use against military targets.

These devastating devices, which create an oxygen-eating fireball followed by a deadly shockwave, are far more powerful than most other conventional weapons.

Thermobaric weapons are generally deployed as rockets or bombs, and they work by releasing fuel and explosive charges. Different fuels can be used, including toxic powdered metals and organic matter containing oxidant.

The explosive charge disperses a large cloud of fuel which then ignites in contact with the oxygen in the surrounding air. This creates a high-temperature fireball and a massive shockwave that literally sucks the air out of any living being in the vicinity.

Thermobaric bombs are devastating and effective in urban areas or open conditions, and can penetrate bunkers and other underground locations, starving the occupants of oxygen. There is very little that can protect humans and other life forms from their blast and incendiary effects.

A 1990 CIA report, cited by Human Rights Watch, noted the effects of a thermobaric explosion in a confined space:

Those near the ignition point are obliterated. Those at the fringe are likely to suffer many internal, thus invisible injuries, including burst eardrums and crushed inner ear organs, severe concussions, ruptured lungs and internal organs, and possibly blindness.

A history of horror

Crude versions of thermobaric weapons were developed by Germany during World War Two. Western states, as well as the Soviet Union and latterly Russia, have used them since the 1960s.

The Soviet Union is believed to have used a thermobaric weapon against China during the Sino-Soviet conflict of 1969, and in Afghanistan as part of its takeover of that country in 1979. Moscow also used them in Chechnya, and has reportedly provided them to separatist rebels in eastern Ukraine.

The United States has used these weapons in Vietnam and in the mountains of Afghanistan.

Why some weapons are banned, even in war

Although thermobaric weapons are not yet unequivocally banned, there are several points that argue against their development and use.

International humanitarian law stipulates what is and is not permissible during warfare. There has long been an understanding that even wars have their limits: while some weapons are considered legal, others are not, precisely because they violate key principles of humanitarian law.

A new report from Human Rights Watch makes it clear the Russian invasion of Ukraine is illegal. It draws on the Geneva Conventions to define the illegitimacy of Moscow’s actions, including its use or potential use of particular weapons.

The use of weapons in indiscriminate attacks those that cannot distinguish between combatants and civilians – is forbidden by the Geneva Conventions.

A thermobaric weapon might be targeted specifically at military installations and personnel, but its effects cannot be contained to one area. In all likelihood, many civilians would be killed if such bombs were used in any city.

Using explosive weapons in populated areas would result in indiscriminate and disproportionate attacks. Aerial bombs, even if aimed at military objectives, pose a grave threat to civilians because of their wide blast radius.

Efforts to ban these weapons have not yet produced a clear prohibition. The 1980 Convention on Certain Conventional Weapons (commonly called the Inhumane Weapons Convention ) addresses incendiary weapons, but states have managed to avoid an explicit ban on thermobaric bombs.

In addition to the impacts on civilians, thermobaric bombs would cause superfluous injury and unnecessary suffering. Under international humanitarian law, they should not be used.

There is a point at which even if a war is deemed legitimate or just violence must not involve weapons that are excessively cruel or inhumane.

If a weapon is likely to prolong the agony of soldiers (or civilians) or result in superfluous and unacceptable injuries, theoretically its use is not permitted. Thermobaric weapons clearly seem to meet this definition.

Cluster bombs and nuclear weapons It is not only thermobaric weapons that cause us concern in the current war.

Ukraine’s government and human rights groups say Russia has also used cluster munitions. These are bombs or rockets that release a cluster of smaller bomblets over a wide area.

Cluster munitions were banned under an international convention in 2008. Russia has not signed (nor has the US, China or India), but until now it has largely respected the convention’s provisions.

Perhaps of greatest concern, however, is Moscow’s nuclear weapons arsenal. President Vladimir Putin has hinted strongly that he would potentially be willing to use them, putting Russian nuclear forces on high alert and warning that countries which interfere in the invasion will face consequences you have never seen .

Russia has around 6,000 nuclear weapons and an escalation of conflict could result in their use either deliberately or inadvertently during the fog of war.

Putin is not the only one to have made threats like this. The US holds around 5,500 nuclear weapons of its own, and its nuclear policy promises nuclear devastation to opponents.

Even the British and French resort to nuclear pressure, and former US president Donald Trump, when threatening North Korea, used similar language. But Putin’s statement goes beyond even these threats.

It is these very real dangers that led 122 states at the United Nations to vote in favour of developing the Treaty on the Prohibition of Nuclear Weapons in 2017.

The war in Ukraine is the latest reminder that we must act to eliminate thermobaric, cluster, and nuclear weapons, under strict international control. The stakes are simply too high to allow these dangers to remain. (The Conversation)