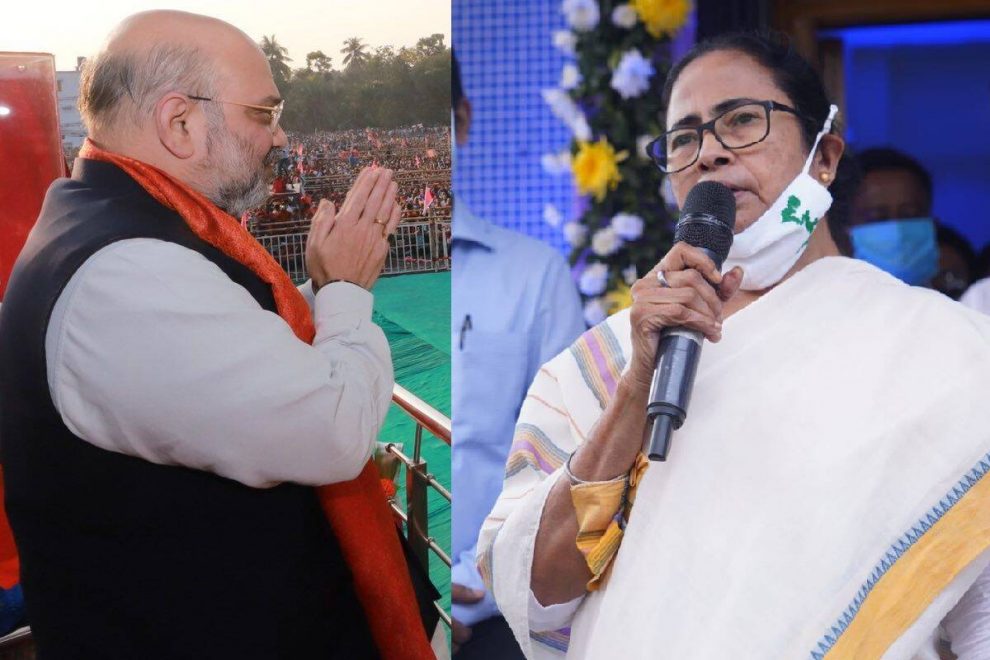 Political battleground is hotting up in West Bengal, Tamil Nadu, Kerala, Assam and Pudducherry as these go to the polls this year in April-May. However, it’s West Bengal that is attracting the maximum attention this election season given that TMC is showing signs of rival BJP giving it a run for its money.

For the past ten years, West Bengal has been ruled by firebrand Chief Minister and supremo of Trinamool Congress, Mamata Banerjee. During this period, she has been successful in turning the erstwhile communist bastion into her fortress. In 2016 Assembly polls, Trinamool led by Mamata was successful to return to power with a big mandate than it had received in 2011 polls when the party created history by dislodging the 34-year-old CPM-led Left Front government — the longest democratically elected Marxist government in the world. The question now is whether BJP will be writing fresh history?

After a decade in power, Mamata, who is now looking for a third term, appears to be  showing signs of being under pressure as she faces an aggressive opposition in the form of the BJP. Actually, before the rise of BJP, which before 2014 Lok Sabha polls was never considered a major player, Didi never faced an aggressive player, as the then main Opposition, the Left Front was yet to come out of the 2011 debacle. Till today, it hasn’t ironed out its internal issues.

Although the Left, which is allying with the Congress again, even after the drastic failure of their 2016 alliance, and isn’t much of a force, its supporters continue to play a major role in State politics. The BJP’s rise can be attributed to mass joining of Left supporters with the saffron party. Not to forget that Left Front, even at the height of the strong anti-incumbency wave in 2011, garnered 41% votes while the TMC+Congress alliance, under Mamta’s leadership got 48%. In the 2011 elections, BJP, although drew blank, managed to receive around 5% votes. So, Left Front+BJP equals 46%, i.e. only 2% less than that of the TMC+Congress alliance in 2011.

In Indian politics, the Left Front+BJP combination is quite rare, as both are ideologically poles apart. They came together only for a few major occasions. In 1977 Lok Sabha elections, to defeat the Congress juggernaut led by then Prime Minister Indira Gandhi, CPM-led Left Front entered into a seat-sharing agreement with the Janata Party formed after merging of many anti-Congress parties that also included the Bharatiya Jana Sangh, the erstwhile avatar of BJP. Then both the Left and BJP supported the National Front coalition led by Prime Minister VP Singh from 1989-90. Another time both came together was in 2008 to bring down the Manmohan Singh-led UPA government.

This time in Bengal once again the Left Front+BJP combination is playing out, but with a difference. It’s not the leaders of both sides, but the lower ranks of both parties that are driving this ideologically apart combination. Earlier, it was their anti-Congress mindset that brought leaders of both sides together and now it’s the anti-Mamata mentality bringing the Left ranks on the same page. This anti-Mamata wave is forcing even the staunch Left voters to support BJP, as they find a strong hope in an aggressive BJP in comparison to a beleaguered Congress-Left Front to oust TMC from power. Remember, the Left lower ranks have always had to battle with their counterparts in TMC, clashing with each other for past decade, often resulting in violence. More so, as following Mamata’s ascension to power, the local Left leaders and supporters were the primary target of TMC cadres.

But since 2013 with national politics starting to shift from Congress to BJP, the statements of CPM and Left leaders started to appear similar to that of Mamata on issues such as secularism. This trend became more similar after Narendra Modi led-BJP’s ascension to power at the Centre in 2014 with Left and TMC coming on board nationally together on issues like “rising intolerance”, Citizenship Amendment Act (CAA) and National Register of Citizens (NRC). At the same time, BJP’s only focus point to dethrone Mamata has undoubtedly appeared more attractive to the Left lower ranks. Importantly, Mamata’s only ideology in her long career in politics till 2014 was to singly oppose CPM, a major reason that hardcore CPM supporters strongly dislike her, more than any political leader.

While there is no denying that Mamata has been able to reach out to the rural section through her welfare schemes, a major reason for her getting elected with a massive mandate in 2016, the rise of corruption plus internal rivalries locally is now forcing the voters to look for an alternative and giving the ruling TMC to look within.

At the same time, though Mamata remains popular among the Muslims, who account for 34% of the State population, given her efforts to economically lift the backward community, the appeasement hasn’t gone down well with the majority Hindu voters, a chunk of them have started to shift towards BJP. The Hindu-Muslim voter divide was noticed in 2019 General elections in the State, where shift of many disgruntled TMC voters towards the saffron party was witnessed and the party losing its stronghold in Junglemahal comprising West Medinipur, Purulia, Bankura and Jhargram. Junglemahal –some 40-odd Assembly seats.

It is this shift of TMC voters in 2019 which is forcing many in the TMC leadership to leave the ‘sinking’ ship. Ministers Suvendu Adhikari (who nurtured East Medinipur district, one of the early bastions of TMC and accounting for 16 Assembly seats), Rajib Banerjee, MLAs, mayor etc have so far quit, joined the BJP and leaving the question open of how many others shall follow suit. The latest hit for Didi has been Rajya Sabha MP Dinesh Trivedi resigning. He is set to join the BJP, perhaps its biggest catch. True that in the 2019 General elections, the TMC was marginally ahead of BJP with just a lead of 3% votes, but it did reveal that the Mamata juggernaut could also be defeated in its own bastion. The writing on the wall as of now is that winds of change are blowing across Bengal. A lot now depends on how the BJP leadership, particularly Union Home Minister and number two in the BJP, Amit Shah, is able to exploit this rising anti-incumbency factor to its favour. West Bengal is definitely top priority as his repeated visits have shown. Will Mamata be able to ride the tide?