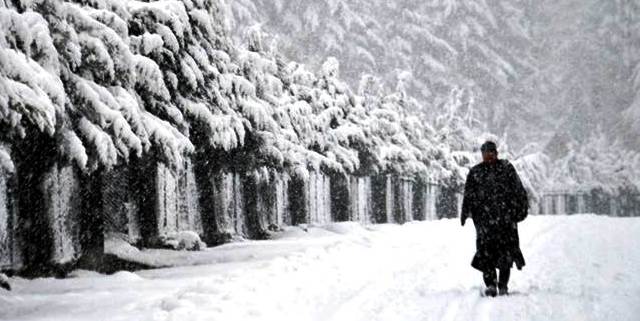 Srinagar, Jan 02: Following further dip in the minimum temperature, the weatherman here has predicted moderate snowfall across Kashmir and heavy snowfall in higher reaches of Jammu from Monday, stating that the night temperature will rise in J&K and Ladakh in coming days.

Director, Meteorological department (MeT), Sonum Lotus told the news agencythat there is possibility of moderate snowfall across Kashmir in between January 04-05.

He added that the higher reaches especially in Pir Panchal and Chenab would experience heavy snowfall during the period, adding that in Jammu, the wet spell would begin from January 03 and would persist till January 05.

Lotus further said that present foggy mornings will also come to an end from tomorrow morning in Jammu region. He also appealed people not to venture out in hilly areas during the period to avoid any untoward incident.

Besides, Lotus said that the Srinagar-Jammu highway may also be closed after fresh snowfall, adding that those scheduled to travel to and from Srinagar should confirm the situation of the road before travelling.

Deputy Director MeT, Mukhtar Ahmad, when contacted informed that after fresh prediction, the weather would remain cloudy on January 06 also.  Ahmad said that after January 05, there is no forecast of major snowfall in J&K and Ladakh till January 10.

Meanwhile, MeT spokesman informed Pahalgam was the coldest place in Kashmir where the mercury settled at minus 8.4 degree Celsius in the intervening night of Friday-Saturday.

He said Srinagar, the summer capital of Jammu and Kashmir recorded a minimum temperature of minus 5.9 degree Celsius. Gulmarg, a world famous ski-resort recorded 7.5 degree Celsius.

Pertinently, Kashmir is under tight grip of Chillai-Kalan, the 40-day harshest winter period. The Chillai-Kalan commenced on December 21 and will end on January 31