Home Newsfeed We will provide alternate govt as soon as possible: Nawab Malik 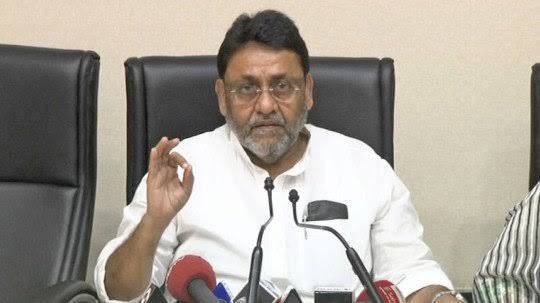 Nationalist Congress Party (NCP) leader Nawab Malik on Wednesday said that NCP and Congress are trying their best to resolve all issues and will provide an alternate government to Maharashtra as soon as possible.
“Congress-NCP have together decided that we must give an alternate government in Maharashtra. It is not possible without NCP-Congress-Shiv Sena coming together. We are trying our best to resolve all issues. We will provide alternate government as soon as possible,” Malik said here after a meeting between NCP and Congress leaders. Congress leader Prithviraj Chavan said that the talks between Congress and NCP were positive today and they will give a stable government to Maharashtra “very soon.”
“Congress-NCP has had long and positive discussions today. Discussions will continue. I am sure we will be able to give a stable government to Maharashtra very soon,” Chavan said.
A meeting of Congress and Nationalist Congress Party (NCP) leaders was held at NCP chief Sharad Pawar’s residence here.
Present in the meeting were Ahmed Patel, KC Venugopal, Mallikarjun Kharge, Jairam Ramesh, Supriya Sule among others.
Earlier in the day, the senior Congress leaders met their party leaders from Maharashtra amid uncertainty over the government formation in Maharashtra.
Maharashtra came under President’s Rule after all the parties failed to form a government in the state.
BJP, which emerged as the single largest party, could not stake claim to form a government as its ally Shiv Sena remained firm on rotating the Chief Minister’s post and equal sharing of Cabinet berths.
The Shiv Sena is now in parleys with the Congress and NCP to form a government in the state.
The BJP won 105 seats in the 288-member assembly followed by Shiv Sena 56, NCP 54 and Congress 44.