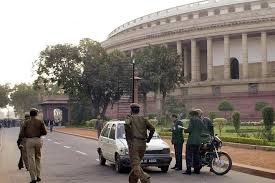 New Delhi: India will never forget the cowardly attack on its Parliament, Prime Minister Narendra Modi said on Sunday as he paid tributes to security personnel who laid down their lives in the terror attack on this day in 2001.
“We will never forget the cowardly attack on our Parliament on this day in 2001. We recall the valour and sacrifice of those who lost their lives protecting our Parliament. India will always be thankful to them,” he tweeted.
Nine persons, including eight security personnel, died in the attack by terrorists belonging to Pakistan-based outfits. All five terrorists were killed by security forces.
The incident led to high level of tension between India and Pakistan and a massive upgrade in the security of the Parliament.
Union Home Minister Amit Shah on Sunday paid tributes to those who laid down their lives in the 2001 Parliament attack and said the nation will remain indebted to the victims forever.

Nineteen years ago on December 13, terrorists of the Lashkar-e-Taiba (LeT) and the Jaish-e-Mohammed (JeM) attacked the Parliament complex and opened fire. Nine persons, including eight security personnel, died in the incident. All five terrorists were killed by security forces.

“I pay my heartfelt tributes to the brave sons of Mother India who made supreme sacrifice by taking on the enemies in the cowardly terrorist attack on the Parliament House, the temple of democracy, in 2001. A grateful nation will forever be indebted for your supreme sacrifice,” Shah tweeted in Hindi.

The home minister also visited the Parliament complex and paid floral tributes to the portraits of those who were killed.

“I bow to their exemplary courage and sacrifice,” he said.

The terror attack led to high level of tension between India and Pakistan and a massive upgrade in the security of the Parliament complex.