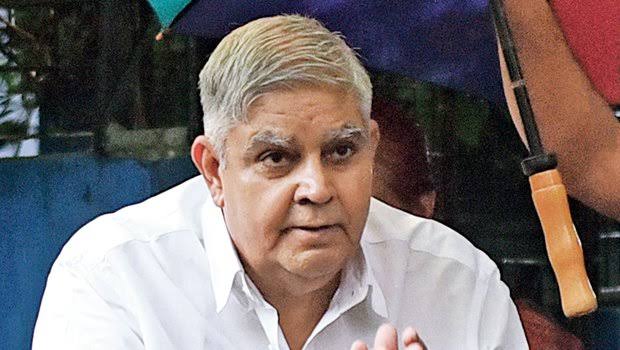 West Bengal Governor Jagdeep Dhankhar has denied allegations made by Trinamool Congress (TMC) MLAs against him for withholding assent to the State Commission on Scheduled Caste and Scheduled Tribe Bill and stated that there was no delay from his side.
“I am pained, shocked and disturbed with the attitude of the government. It is shocking, how can a government in a democratic set up act in this manner? On November 25, the government took a decision on the ST/SC commission. It was published in all the newspapers on November 26. The government has the right to make a decision,” Dhankhar told ANI on Tuesday. “I have nothing to say on that but the file was not sent to me on 25th, 26th or 27th of November. It came to me on 29th in the late afternoon. There was a holiday on November 30 and December 1. The government sat with it for five days. The moment the work was started, I passed an order to process it,” he added.
The winter session of the assembly that began on November 29 and likely to continue till December 13 was adjourned on Tuesday.
The Governor further asserted that he has stated many times that someone from the government should come to brief the Governor. He further claimed that he had asked for some clarifications from the government on December 5 but nobody came to him.
“Look at the attitude of the government as to how they are negligent about it, they are playing politics in the temple of democracy. I will not allow my shoulder to be used for political purposes. They cannot fool all the people all the time,” he added.
Dhankar requested the state government to work for the development of the people and adopt a positive attitude towards the governor.
The Governor on Tuesday sent a message to Speaker Biman Banerjee with respect to the State Commission for the Scheduled Castes and Scheduled Tribes Bill, 2019 for consideration in the Assembly.
Members of TMC party staged a protest at the Legislative Assembly premises on Tuesday against the Governor . During the protest, the TMC members shouted slogans and demanded an explanation from the Governor for withholding assent to bills.
Speaking on the issue. “The SC/ST bill was a long time requirement. After it was unanimously passed by the Assembly, it was sent to the Governor for his signature. Under the constitutional principles, when the Assembly sends a bill to the Governor, it is his duty to sign it for approval.”
He further alleged that the Governor has been sitting on the bill for 7-8 days, and further called him “an agent of BJP”.
“The assembly was closed for 2-3 days because of him. We also walked out of the Rajya Sabha today. We demand the Central government to call him back, or our agitation will continue,” he said.
TMC Rajya Sabha MP Derek O’Brien stated that the Governor had humiliated the West Bengal Assembly and the SCs and STs of the state.
“The assembly is not running because he has withheld the Bill. This is an insult to the Constitution, the people of West Bengal, and the SCs and STs. The Governor should be called back by the Centre, or we have seen Raj Bhawans turned into ‘Shakhaas’.”
The West Bengal assembly was adjourned last week on two days as the Speaker Biman Bannerjee said bills meant to be tabled had not been approved by the Governor.
Since he took office in July, Dhankar has been at loggerheads with Banerjee over several issues such as the demand for the helicopter to attend an event, which was denied by Mamata.
The TMC has also alleged that he was running a “parallel administration” in the state, an allegation refuted by the Governor.