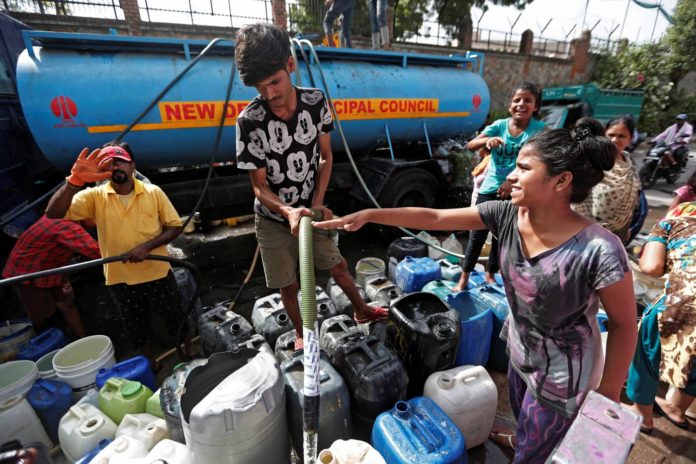 BOGOTA: From Yemen to India, and parts of Central America to the African Sahel, about a quarter of the world’s people face extreme water shortages that are fueling conflict, social unrest and migration, water experts said on Wednesday.

With the world’s population rising and climate change bringing more erratic rainfall, including severe droughts, competition for scarcer water is growing, they said, with serious consequences.

“It’s threats like these that keep me up at night,” the diplomat told a webinar hosted by the World Resources Institute (WRI), a U.S.-based research group.

One in four children worldwide will be living in areas of extremely high water stress by 2040, researchers estimated.

In terms of water availability, “at some point we are going to hit the wall, and that wall might be different in different places”, Heijden said.

Climate change is compounding the challenge, she said, with cities such as India’s Chennai and South Africa’s Cape Town battling severe water shortages in recent years related in part to erratic rainfall.

Disputes over water have for millenia served as a flashpoint, driving political instability and conflict, the water experts said.

And “the risks of water-related disputes are growing .. in part because of growing scarcity over water”, said Peter Gleick, co-founder of the California-based Pacific Institute, which jointly published the report with WRI and The Water, Peace and Security Partnership.

But as water scarcity grows, water systems are also increasingly becoming targets in other types of conflicts, said Gleick, whose institute has compiled a chronology of water conflicts that dates back 5,000 years.

In Yemen, years of fighting has destroyed water infrastructure, leaving millions without safe water to drink or grow crops. Wells and other water facilities also have been targets in Somalia, Iraq, Syria and other countries, he said.

Recurring droughts in parts of Central America and the African Sahel in recent years have triggered migration as subsistence farmers, whose harvests have been decimated by low rainfall, seek refuge and jobs in other countries.

One key to tackling water scarcity is boosting investment in more sparing use of water in agriculture, an industry that absorbs more than two-thirds of the water used by people each year, the experts said.

Farmers in some drought-hit areas are switching to more efficient sprinkler or drip irrigation, and are using remote monitoring tools to make sure they apply just the right amount of moisture at the right time and in the right place, they said.

Conserving forests, wetlands and watersheds, including those around cities, can help absorb rainfall, helping stem crop losses from flooding and drought.

“Where possible such green infrastructure should be used with or instead of traditional physical infrastructure like dams, levies (or) reservoirs,” said Charles Iceland, head of global and national water initiatives at WRI.

That’s both because it can cost less and because it encourages preservation of ecosystems, he said.

As water becomes more precious, communities living in water-scarce hot spots must be included in making decisions about its use and management, the experts said.

“Only in that way can we make real progress,” said Heijden, noting that women and youth need to have a strong voice in those decisions.

She said a range of options were available to deal with worsening water scarcity, but getting them into practice could be a challenge.

“We know the many solutions that are there, but to actually implement them we still face many barriers, be they technical, financial or in terms of political will,” she said.