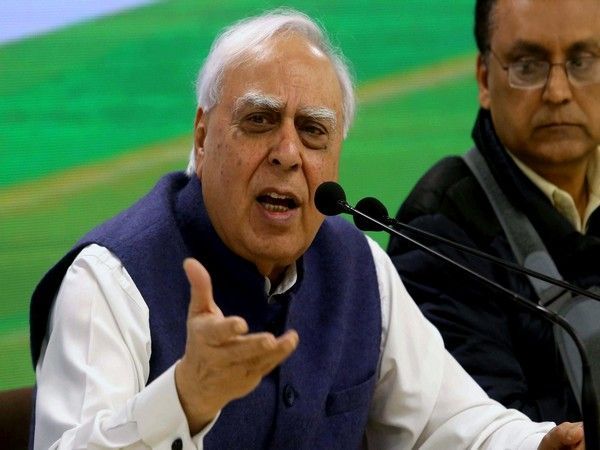 Congress leader Kapil Sibal on Wednesday lashed out at Union Home Minister Amit Shah over his “Gupkar gang” remark and asked him if Bharatiya Janata Party (BJP)-People’s Democratic Alliance (PDP) alliance was done to “bring back terror” in Jammu and Kashmir.
“Amit Shah alleges: Congress wants to take ‘J&K back to the era of terror and turmoil’ when in talk with other parties in the upcoming District Development Council elections. Amitji was BJP -PDP alliance to “bring back terror in J&K ..” ? Which gang were you then part of?” Sibal tweeted.

On Tuesday, Shah had said that the People’s Alliance for Gupkar Declaration wants foreign forces to intervene in Jammu and Kashmir and asserted that Indian people will no longer tolerate an “unholy global gathbandhan” against national interest.
Taking to Twitter, Shah had asked Congress interim President Sonia Gandhi and party leader Rahul Gandhi if they support the People’s Alliance for Gupkar Declaration which, he said, insults India’s tricolour.

The Home Minister said that “Congress and the Gupkar Gang want to take Jammu and Kashmir back to the era of terror and turmoil”.
However, Congress general secretary Randeep Singh Surjewala Surjewala clarified that “Congress party is not a part of Gupkar alliance or People’s Alliance for Gupkar Declaration.”In 2015, BJP entered into an alliance with PDP as no party could get a majority in 2014 Assembly polls in the erstwhile state of Jammu and Kashmir. However, in 2018, BJP pulled out of its coalition government with the PDP.
Parties including the National Conference, PDP, Peoples Conference and CPI(M), formed the People’s Alliance for Gupkar Declaration and are fighting the maiden District Development Council (DDC) elections together.

While Farooq Abdullah was chosen as president of the People’s Alliance for Gupkar Declaration, Mehbooba Mufti was picked to play a role of vice-president.
On October 24, National Conference leader Omar Abdullah had said that the PAGD has been formed to ensure the rights of the people of Jammu and Kashmir and Ladakh are restored. “All of us united that the pre-August 5th, 2019 position must be restored,” he added.

The DDC polls will be conducted in Jammu and Kashmir in eight phases between November 28 and December 19, and the counting of votes will take place on December 2