Veteran Bollywood star Rishi Kapoor, who died Thursday morning, wanted to go to Pakistan with his children once before his death.

The Kapoor clan has a house in Peshawar, Pakistan. It was constructed between 1918 and 1922 by Dewan Basheswarnath Kapoor, father of Prithviraj Kapoor, who was the first from the family to enter the Indian film industry.

The family shifted to India after Partition.

In a November 12, 2017 chat on the Twitter, Rishi Kapoor said he agreed with National Conference president Farooq Abdullah, who claimed that Pakistan-occupied Kashmir (PoK) belongs to Pakistan and “this won’t change” no matter how many wars India and Pakistan fight against each other.

Abdullah had on that day said that talk of an independent Kashmir was “wrong” as the Valley is landlocked and surrounded by three nuclear powers — China, Pakistan and India.

His statement came days after Pakistan Prime Minister Shahid Khaqan Abbasi had rejected the idea of an “independent Kashmir”, saying it was not based on “reality”.

Reacting to the same, Rishi wrote on Twitter, “Farooq Abdullah ji, Salaam! Totally agree with you sir. Jammu and Kashmir is ours, and PoK is theirs. This is the only way we can solve our problem.

“Accept it, I am 65-years-old and I want to see Pakistan before I die. I want my children to see their roots. Bas karva dijiye (Please make it happen). Jai Mata Di!” 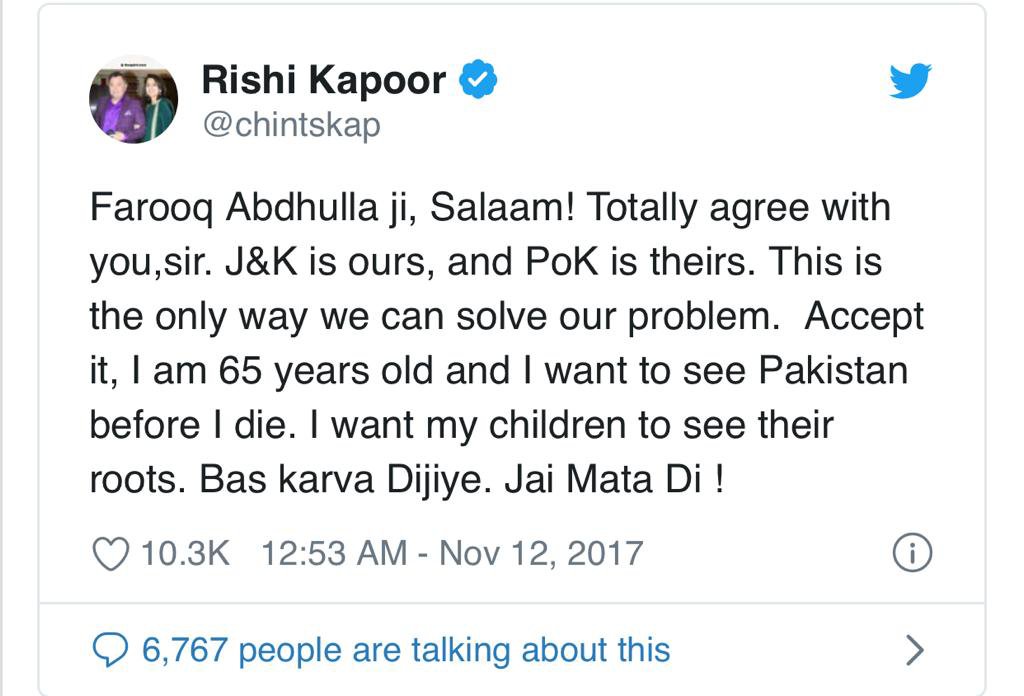 A week later a social activist in Jammu filed a complaint with the district magistrate against former chief minister Farooq Abdullah and actor Rishi Kapoor seeking registration of sedition cases against them for their remarks on Pakistan Occupied Kashmir (PoK).

Sukesh Khajuria, in an application on November 18, 2017, sought action under section 196 of the CrPC against them for “accepting PoK as part of Pakistan”.
In the application, he said they should be booked under section 124-A of the Ranbir Penal Code (Sedition) and other provisions of law.