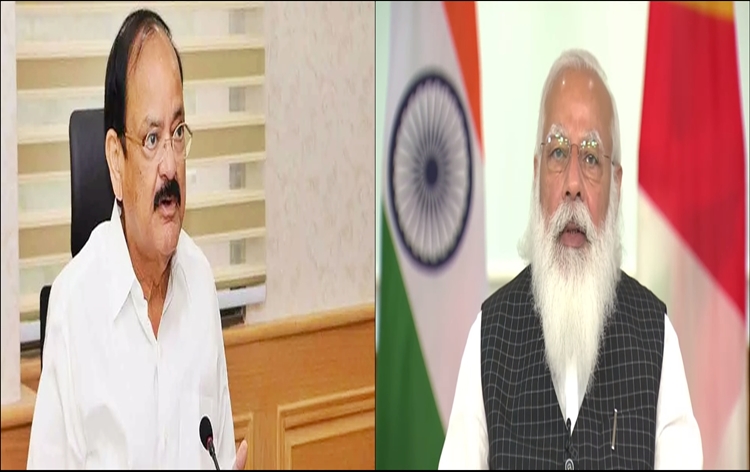 Vice President M Venkaiah Naidu has asked Governors to collaborate actively with Chief Ministers in the fight against COVID-19. He added, they can provide guidance to the state governments on crafting a more effective strategy. Mr Naidu stated this while interacting today with Governors and Lieutenant Governors in the presence of Prime Minister Narendra Modi regarding the pandemic through video conferencing. The Vice President said, the Governors can act as potential agents of change and supplement the efforts of Chief Ministers in encouraging more partners to contribute in the fight against the pandemic.

Mr Naidu asked the Governors to work with the state governments and make it a people’s movement. He said, educational institutions, civil society organizations, philanthropists and corporate houses have become active partners during the last one year in the fight against pandemic and there is need to associate them during this second wave as well. Emphasizing that the importance of adopting COVID-appropriate behaviour needs to be widely communicated, he said, the Governors can greatly expand public outreach and influence public behaviour. Mr Naidu underlined that the spread of the virus can be controlled with the support of the community.

Expressing concern over the rising number of COVID-19 cases in the country, Mr Naidu cautioned that the healthcare infrastructure will inevitably come under tremendous pressure. He called for special focus on ten states that account for 85 per cent of national cases and  89 per cent deaths reported in the last 14 days.

The Vice President also noted that the Central government has decided the COVID-19 strategy in close collaboration with the states and called upon everyone to keep political differences aside and act unitedly as a team. He also endorsed the Prime Minister’s suggestion for an all-party meeting saying it will help in brainstorming new ideas, sharing of knowledge and exchange of best practices and effective understanding of field concerns and various perspectives.

In his address, the Prime Minister asserted that the government is committed to ensuring adequate availability of COVID vaccines in the country. He highlighted that India has become the fastest nation to reach the landmark of ten crore vaccinations. Noting the positive impact of Tika Utsav in the last four days, Mr. Modi said, in this period, the vaccination drive was expanded and new vaccination centres also came up. He said, along with spreading the message about vaccination and treatment, the Governors can also spread awareness about AYUSH-related remedies.

Praising the citizens who participated in this battle last year considering it their duty, the Prime Minister said, the same feeling of Janbhagidari needs to be encouraged now as well. He added that the combined power of all community organizations, political parties, NGOs and social institutions needs to be harnessed. Mr Modi suggested that the Governors can actively engage to ensure that social institutions collaborate seamlessly with the State Governments towards micro containment.

He said, their social network can help ensure an increase in the capacity of ambulances, ventilators and oxygen in hospitals. Discussing the surge in the COVID cases, Mr Modi said, in this stage of the fight against the virus, the country stands to gain from last year’s experience and improved healthcare capacity. He also discussed the increased RT-PCR testing capacity and noted that the country has become Aatmanirbhar with respect to kits and other material related to testing.