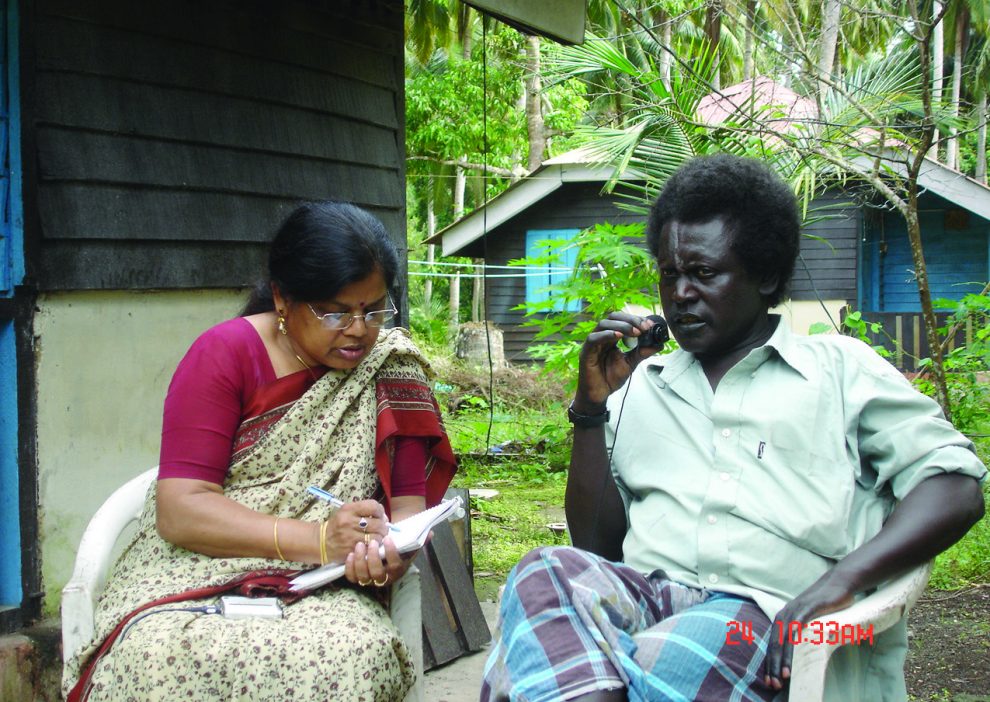 Note: The following excerpt has been taken from the preface of the book.

This is a collection of folk tales and songs of the Great Andamanese, a moribund language of the only surviving pre-Neolithic tribe, the remnants of the first migration out of Africa 70,000 years ago. When I visited the island in 2005, the surviving eight speakers informed us that due to loss of fluency in the language, the narrative power in any of the two languages that they used was already lost. None of the speakers was proficient enough to tell any tales, either in Great Andamanese or in Andamanese Hindi—the former was already on the brink of extinction, while the latter was a pidgin with broken linguistic structures. It was the most daunting and challenging task to extract stories from a tribe that had not heard any stories in the last 40–50 years. Hence, these stories and songs represent the first-ever collection rendered to the compiler by the Great Andamanese people in local settings. The compilation comes with audio and video recordings of the stories and songs to retain the originality and orality of the narratives.

With the extinction of storytellers and singers, as mentioned in the foreword, this is the only collection of 10 rare stories and 46 rare songs obtained in the native language. I was fortunate enough to elicit these stories in their lifetime when I visited them in Port Blair or the jungles of Strait Island. Each story is unique in its own way, as the oral narratives are different from those written or told in the mainstream languages.

The Great Andamanese people were hunters and gatherers till the mid-19th century. Their stories in the current manuscript represent the world of forest-dwellers as well as that of the seafarers. The evolution of the Great Andamanese has been very different from the agrarian and pastoral societies, which is well reflected in the tales.

All but one of the stories were narrated by Nao Junior, a male member of the society. Other members of the Great Andamanese community were neither willing to share folk tales, nor found any utility in remembering them. In such a challenging situation, it was a daunting task to elicit stories, comprehend the meanings and nuances of words and expressions, as well as appreciate a worldview far removed from ours. But without Nao Jr, we would have left the island without any folk tale. He was the only one who remembered the language and the names of various natural objects, including the names of the birds and fishes. He was a soft-spoken and very sensitive person, who eventually realized the importance of language documentation and helped us throughout our stay in the island despite the initial resistance. He could give us two creation tales—rather rare renderings. He eventually became quite enthusiastic in narrating the folk tales, so much so that he took a keen interest in the whole process of documentation so that I could record each of them very carefully and accurately. I have tried my best to capture the journey of elicitation and recording in the first chapter to familiarize the readers with the environment—the context in which the elicitation was made, as well as the frame of mind of the narrator.

Out of the 10 stories, only four were rendered in the bilingual mode viz. the Great Andamanese language and Andamanese Hindi. The rest were narrated to us in Andamanese Hindi only, as the narrator found himself incompetent to tell the whole story in his native language. As the elicitation progressed, the narrator gradually became more confident in his rendering. These stories are given in the book in simple transcription, followed by a line-by-line English translation. Hence, some stories are long, which have been provided with original renderings along with their English translations, while others are short, as only the English translation has been given here and the original Andamanese Hindi version (a kind of pidgin) has been held back. Some words have been retained in original for their resonance or their untranslatability. The songs have also been given in Roman transcription. Free English translation accompanies the original narratives and songs. Thus, the readers can read the stories in the original language or sing the songs in the Great Andamanese language. The book comes with interactive QR codes through which some of the audio-visual recordings can be accessed. These stories and songs will introduce the speakers to one of the oldest languages of the world.

The original renderings were transcribed in IPA (International Phonetic Alphabet) with interlinear translation followed by Devanagari, the script that is used for the written form of the language. However, to ensure user-friendliness, we have used Roman transcription for the Great Andamanese speech. These recordings of the songs and stories were done in the original environment. Because it is perhaps one of the oldest and the very first surviving languages of the people who inhabited Southeast Asia, its oral rendering is invaluable for any literary documentation.

These stories encode the worldview of the Great Andamanese society as they encapsulate history, philosophy, culture, beliefs, values, and power of judgment. Alas, the loss of language and its speakers with the ability to narrate has wiped out all these from the face of this earth permanently. By publishing these stories, we will be able to give life to some of the lost oral heritage of the vanishing world of the Great Andamanese.

This is the first time that Great Andamanese songs have been transcribed in Roman and translated in English, bringing to light a unique heritage. Most of the songs are from Boa Sr, the last speaker of the Bo language, who remembered some songs. There are two songs on turtle-hunting from a male, a Karen speaker, who is currently in his late 80s. He learned the Great Andamanese language in 1940 from one of the Great Andamanese elders and still remembered it when I met him in 2008. Unfortunately, the remaining members of the community neither speak the language, nor remember any tale or song.

The two key persons, Nao Jr and Boa Sr, who contributed to this volume, are no more in this world. I remember it vividly that while I was preparing the dictionary of the Great Andamanese language, I was informed that Nao Jr, who was in his 50s, succumbed to kidney failure and passed away on 22 January 2009. He was a symbol of a priceless Indian heritage and, in death, he carried away with him the knowledge and memories of an entire race. The world lost a precious gem from an ancient civilization. Later, on 26 January 2010, Boa Sr, aged 83, also passed away due to a prolonged illness. It is sad that both these speakers left for the heavenly abode much before their time. The only solace that I have today is that we travelled together in reviving the memories of an ancient civilization.

Excerpted with permission from Voices from the Lost Horizon: Stories and Songs of the Great Andamanese, Anvita Abbi, Niyogi Books. Read more about the book here and buy it here.

“The Grand Anicut”: In this novel set in 1st century CE, a dam is being constructed on the Kaveri by the Cholas
“Harijan”: Gopinath Mohanty’s Odia novel about the lives of manual scavengers is now in an English translation
Comment