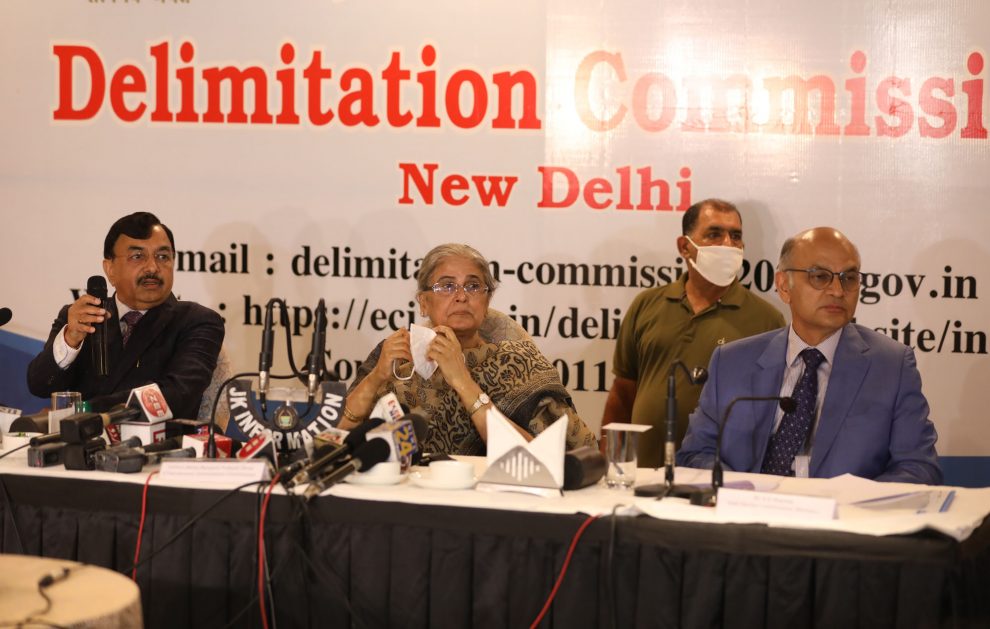 The successful completion of the All – Party Meet held by PM Modi at his residence in New Delhi has rung the bell for the resumption of political process in the JK Union Territory. All of a sudden, all political parties and many social organizations have jumped out of their deep slumber and become active.  The PM during his address to the attendees had said, “Our priority is to strengthen grassroots democracy in J&K. Delimitation has to happen at a quick pace so that polls can happen and J&K gets an elected Government that gives strength to J&K’s development trajectory.” Both he and Home Minister appealed to all the parties to participate in the delimitation process. The delimitation has been necessitated consequent to the reorganization of the State in two union territories in accordance with the J&K Reorganization Act,2019 (referred to as the Act) which also increased the number of assembly seats by seven with a total of 90 seats.  The J&K Delimitation Commission came into existence under provisions of Part V of the Act, passed by both houses of Parliament in August 2019. The delimitation is to be based on Census-2011.

The after effect of the meeting with PM was that it not only activated the political parties in J&K, it also put a sense of urgency to the Commission which also began to speed up the process. It was also clarified in the meeting that the elections would be held only after the delimitation process is completed. To begin with the response of the Kashmir based political parties had been very lukewarm to the extent the three associate members of the Commission belonging to the National Conference (NC) had announced boycott of the Commission. Its contention was that they are against the Act and have appealed in the Supreme Court against it. Thus, any action taken under the provisions of the Act was “unconstitutional” till the Court gives its verdict. The other members of the Gupkar Alliance echoed the same sentiments. But the PM’s appeal to the Kashmiri leaders at the Meet appears to have a magical effect with all parties except the Mehbooba Mufti’s PDP coming on board and agreeing to cooperate with the Commission. There are many voices in the Valley claiming to be legal experts and stating that there is no correlation between delimitation and elections. Their demand is to revert to full statehood followed by elections and delimitation thereafter. The demand does not hold ground because the erstwhile assembly of J&K based on the Constitution of J&K has become redundant after revocation of Article 370, as it existed. The state was further divided into two UTs with J&K having a legislative assembly with increase in its strength. Hence delimitation of fresh territorial constituencies prior to holding of elections is necessary.  The narrative has possibly been built to add confusion and avoid further alienation as the vast majority of the Kashmiris are dis-illusioned with the constituents of Gupkar Alliance for their frequent shifting of goal posts.

After hectic parleys at Delhi, the Commission announced a four-day visit to the UT to interact with political parties, social organizations and the Deputy Commissioners of all 20 districts to get a wider perception of the views of various stakeholders. However, the opportunity provided by the Commission was misused by the political parties as well as most social organizations for their own political jugglery to appeal to their vote bank or targeted constituencies rather than providing inputs that would be beneficial to the Commission to accomplish its mission as per its mandate. The Commission has a fixed mandate and cannot go beyond that, this fact was ignored by all cutting across party lines by raising superficial and irrelevant issues which cannot be addressed or resolved or even recommended by the Commission. The mandate is unambiguous and that is to delineate 90 territorial constituencies for the new assembly of JKUT. It doesn’t have the mandate to even disturb the status quo of the existing five parliamentary seats.

Thus, the demands like not adhering to 2011 census because of alleged fudged figures of population in the two regions or de-freezing of 8 assembly seats reserved for POJK for the POJK refugees are beyond the mandate of the Commission. Those demanding it also know but for them wastage of the valuable time of the Commission does not matter, what matters is the optics of putting across the views of the aggrieved sections so that they remain stuck to their band wagon. Both the proposals need amendment of the Constitution by the Parliament. The concerned parties will do well to spend their energies for ensuring the necessary parliamentary amendments. Similarly demands like reservations for a particular religious community, separate Jammu state, reservation for OBCs and Paharis, 50-50 formula, provision of security to political leaders of a particular party, fixing educational qualification of SC candidates, reservation or nomination of minority population of Kashmir, seats for residents of border belt, DPs of 1947, West Pakistan refugees are beyond the mandate of the Commission. Interestingly, none demanded reservation of seats for women!

It is not difficult to fathom the logic behind the statement of Peoples’ Conference Chairman when he said that land, desert, stones don’t need representation and population be the sole criteria for the delimitation. It’s the pure urge to continue with the Kashmiri hegemony which was drawn by the Kashmiri leadership from gerrymandering of the territorial constituencies in 1951. Sheikh Mohammad Abdullah with full support of Jawahar Lal Nehru threw to the wind the then established principle of one assembly seat per 40,000 population and arbitrarily gave 30 seats to Jammu and 43 seats to Kashmir province. This skewed distribution continued till the abrogation of 370 when the recently dissolved assembly had 46 seats for Kashmir and 37 for Jammu, four more than the half-way mark to form the government. The gross injustice done by the Sheikh led to political subjugation of Jammu which continued to suffer due to his deliberate act of promoting Kashmiri hegemony and supremacy as a revenge against the Dogras.

Sheikh blatantly ignored the purpose of delimitation, “to have equal representation to equal segments of the population in order to ensure a fair division of geographical areas so that all political parties or candidates contesting elections have a level playing field in terms of a number of voters.” Thus, the NC representation to the Commission “to give due share to all parts of the Jammu region so that our commitment for equitable empowerment of all regions and subregions does not get dented” is nothing but laughable and full of deceit. Let alone subregions, was NC ever fare to the Jammu and Ladakh regions? This sudden change of heart is nothing but a political gimmick.  Sau chuhe kha kar billi haj ko chali!!

Similarly, the Congress demand of restoration of full statehood has no relevance. Apart from being beyond the mandate of the Commission, it carries no logic as far as delimitation is concerned. Will return to statehood in any way change the geography and population the main factors to be considered for the delimitation. Also, the demand for fair and transparent “exercise” and to share the draft proposals in public domain raises unnecessary needle of suspicion on the working of the Commission. As per the existing norms, the Commission would have done it anyways as was confirmed during the brief press conference by the Commission before departure from the UT.

It needs to be understood by all that the Commission is an independent body and the executive and political parties cannot interfere in its functioning. Thus, all parties trying to put a question mark on the fairness and transparency of the Commission are guilty of casting aspersions and doubting the functioning of a constitutional body. The award of the Commission cannot be challenged even in a court of law.

The Commission has been very generous in its maiden visit by accommodating all those who wanted to meet it despite many of them only interested in optics. The Commission is urged to take cognizance of the suggestion of the youngest party, Jammu & Kashmir Apni Party, and return to the UT soon again to visit remote areas, difficult areas, tehsil and district headquarters of sparsely populated areas to get first-hand account of geography, topography and population composition in Jammu and Kashmir.

Whatever, it may be the report of the delimitation commission is being awaited eagerly in both the regions of the UT. When the report is submitted to the Government will be the precursor of likely dates of the much-awaited elections? As per my assessment it would be later than sooner.

The author is a Jammu based veteran, political commentator and columnist.