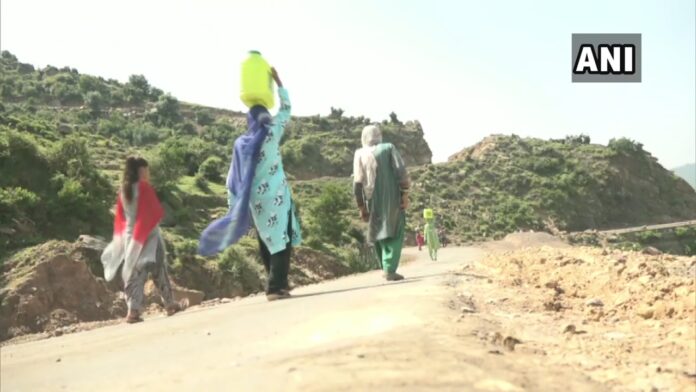 Jammu: Even after 74 years of independence, turning on a tap to get clean water remains a distant dream for the residents of Prey village and some adjoining villages in tehsil Ramnagar of Udhampur district in Jammu and Kashmir.
While talking to ANI, the villagers said that they are facing water crisis in the absence of pipelines attaching the houses in the area to the overhead water tank in the area, which was constructed over a year ago.
“Since the time of independence, we have been struggling for clean water. Women and children have to walk several kilometres to fetch drinking water. An overhead water tank was installed here by the authorities but we are still awaiting for water facility as no pipeline has been laid down,” said Fakeer Chand, a senior citizen in Prey.
He appealed to the central government and Lieutenant governor of Jammu and Kashmir to instruct the department to lay water pipes and lift the water in the said tank so that the village gets water facility.

Over 80 houses in Prey village and adjoining villages have had no access to clean, potable water for decades despite lakhs of rupees being spent on the facility. 1.5 years ago, Jal Shakti Department of Jammu and Kashmir government constructed an over-headed (Big) water tank with an aim to provide clean and safe drinking water facility to the villagers but till date villagers say they struggle to get water supply.
“There is an acute water crisis here. I appeal to the government to resolve our problem. Women and school-going children have to walk several kilometres to fetch water. No pipeline has been attached to the water tank. It has already been 1.5 years,” said Ramesh Chandra another local in Prey.

Vishnu Devi, yet another resident of the village said that she used to walk some 3 kms to fetch water.
“It has been years we have received water. We requested everyone but to no avail. The water tank was constructed here but it is empty. We have to walk 3 kms to fetch water from chashma (natural resource of water),” she said.
Echoing similar sentiments, Jyoti Devi, a resident of Prey village said, “It requires us three hours to fetch water. We have to make several rounds walking two to four kilometres with heavy buckets of water over our heads.”
Jal Shakti Department’s Ramnagar Division official Sanjeev Gupta said that problem of the villagers will be solved soon.
“We just came to know about the problem of water in Prey village and adjoining villages. Very soon we will cover said villages under the Jal Shakti Mission. Their problems to get portable water will be sorted out soon,” Gupta said.
Disclaimer: The views expressed in the article above are those of the authors’ and do not necessarily represent or reflect the views of this publishing house. Unless otherwise noted, the author is writing in his/her personal capacity. They are not intended and should not be thought to represent official ideas, attitudes, or policies of any agency or institution. (ANI)