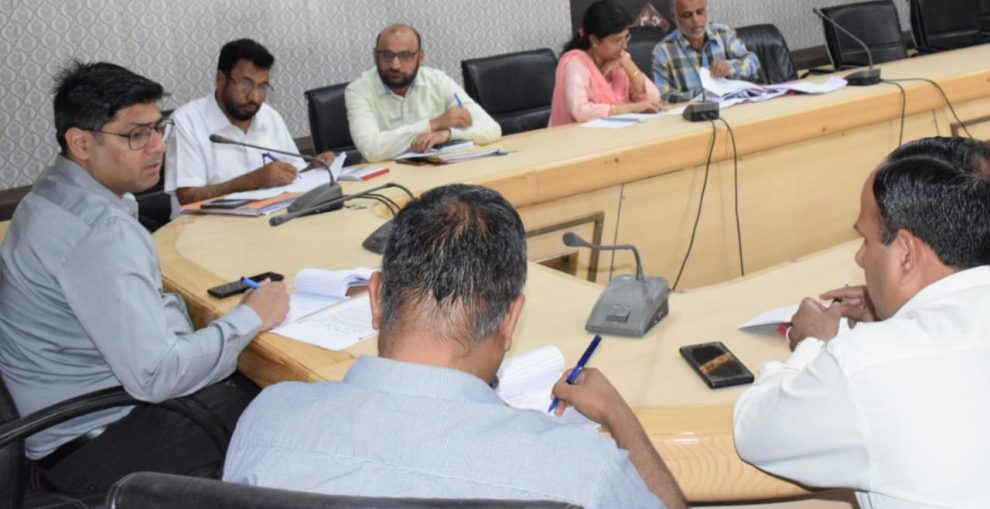 RAJOURI, MAY 23: District Development Commissioner Rajouri, Vikas Kundal today reviewed the progress under Jal Jeevan Mission in the district here at a meeting of the concerned officers held in the Conference Hall of the DDC office complex.

The meeting was informed that the district has 129252 households out of which 67736 have functional tap water connections, while 61517 are yet to be covered.

Reviewing the status of the schemes under JJM, the meeting was informed that 293 schemes have been approved involving an estimated cost of Rs 1723 crore. It was also informed that the work on one scheme was in progress, while the tenders have been floated for 165 schemes and are presently under evaluation stage.

The meeting was also informed about the IEC activities being carried out in the district by Integrated Support Agency (ISA) to sensitize the public about water conservation, different aspects of Jal Jeevan Mission and the role and responsibilities of the Gram Sabhas in the conservation of local water resources.

While addressing the officers, the DDC said that Jal Jeevan Mission envisages providing safe drinking water through individual household tap connections in a time bound manner. He directed the concerned officers to work in tandem for the successful implementation of the Mission so that benefits are provided to the general public.

The DDC also enquired from the CEO Education about the number of schools which have functional drinking water facilities. The concerned officer informed that there are 1722 Govt schools and 352 private schools in the district. She also apprised that   majority of schools have tap water connections and the rest would be provided the same   in coming months.

The DDC directed the Jal Shakti Department to take effective measures to provide drinking water to all schools of the district so that the students don’t face any inconvenience.